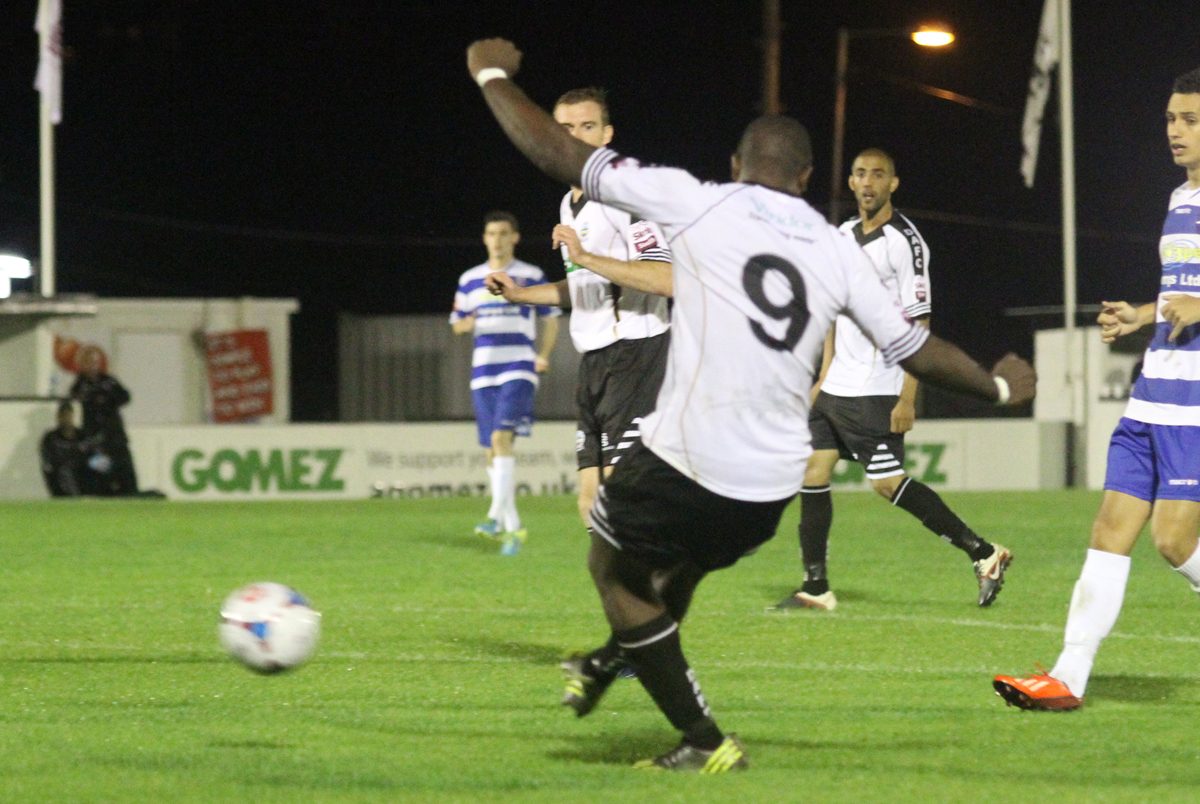 *BS*After a run of four consecutive Skrill South defeats, Whites made the long journey to face Bath City on Saturday aiming to stop the rot and get back to winning ways.

After a much-improved team performance, this was achieved as goals from Nathan Elder and Tom Murphy sealing all three points.*BF*

Elder, whose goal was his first in the league this season, was delighted to finally break his duck: “I was ridiculously relieved. I hadn’t been starting many games, so knew I had to start taking my chances when they came my way. I’m delighted to get my first, and hopefully it’ll get easier from here on in.”

I asked Nathan if his self-belief had dropped at all, as before Saturday’s game I am sure he would’ve hoped to have already scored – but he was adamant in his reply: “I’m always confident so I kept my head up. I didn’t doubt myself.

“Now I need to keep my place in the side. If I want to score more goals then I need to be playing games week in, week out.”

The 28-year-old brings five years of Football League experience to the side, making him the most experienced of the attacking options Chris Kinnear has to choose from. Competing for a starting position in attack alongside Elliott Charles and Michael Bakare, his chances have thus far been limited but the imposing striker is now focusing on a regular starting shirt: “It’s great to have healthy competition – Elliott and Michael are two quality strikers, but I’m 100% looking to cement my place.

“The main thing, though, is the team – I want all of the boys to do well, and if they’re scoring then I’m happy. The other guys up front with me are younger, and if I can help them out with my experience then I’m more than happy to do that. Elliott is a real grafter. He’s in the same position I was, desperate to get his first goal – and like me, when he gets his first one his confidence will go through the roof.

“We need to remember how young he still is. For his age, his size and ability is fantastic – yes, he needs a bit of coaching and advice along the way but he’ll do so well in his career. He’s an asset to the club and I’d much rather have him on my side than play against him.”

Saturday’s win came just four days after a disappointing performance in the 1-0 loss away at Sutton United, in which Elder felt his experience helped him get through the game: “We had to be sure our heads didn’t drop. Things weren’t going our way, especially with the red card (for Moses Ademola), but we still created chances to score.

“If our heads drop, things will just go downhill. If we don’t give it our all, we let the fans and the gaffer down – even when we’re losing, we need to show a lot of effort and quality to fight back from it. Despite the run of defeats, it wasn’t hard for us to stay positive – we weren’t getting beaten heavily, our problem just lied in the final third and not being able to get the ball into the net.

*Q1*“I’m sure we won’t lose four games in a row again this season. Every side is going to have a bit of a poor run, and if we’ve got ours out of the way early on then I think that’s better than it happening in February or March. Now we have to focus on getting a good run going.”

Whites travel to Lancing FC to face Guernsey in the FA Cup second qualifying round next Saturday, before hosting Erith & Belvedere in the Kent Senior Cup (assuming there is no FA Cup replay) and bottom side Dorchester Town in the Skrill South: “On paper, we should do well in the next couple of weeks. We need to do a professional job though – we don’t underestimate any side that we play, as shown against Margate.

“Sometimes in football, you get games where you come off the pitch and have had a really enjoyable game – that was my feeling after that win. It was enjoyable and everyone expressed themselves really well, and the result was deserved.”

Elder’s time spent in the Football League makes him one of the more experienced members of the squad, and states that one aspect of his time at Crabble he is enjoying is the opportunity to help the side’s younger members in their own development: “Everyone at the side has got talent, and if I can help them improve and reach their potential then that’s a real accomplishment.

*Q2*“There are a couple of young guys in the squad who will go far, such as Sean Raggett – he’s been incredible this season, and against Bath he was immense. For his age, he’s a brilliant player. Also, Lloyd Harrington – his injury was very unfortunate but I’m sure once he’s back in the side he’ll be a huge player for us.”

Elder explains that, despite being an ambitious person and wanting to do as well as he can, he is more than happy at the current level of football: “My life has changed from when I was playing professional football – I’ve recently got engaged and have two young boys, so travelling around the country three of four times a month isn’t really for me anymore.

“Besides, if I was going to be back playing in the Football League then I think it would’ve happened by now. My focus is 100% for whoever I’m playing for, and to score as many goals as possible. Whether it’s at this level, or even lower, then as long as I’m playing football I’ll be happy.

“I had some great moments whilst playing professionally, but also some bad times. What I can say, though, is that the team spirit at Dover is the best I’ve ever seen. At Ebbsfleet last season, when we were losing games the mood was very negative. You used to get little groups of three or four players keep themselves to themselves and the environment wasn’t good.

“At Dover, even when we were losing games we stayed positive. We’re a team, and not just a group of individuals like I had last season. You find a lot more out about yourself, and your team-mates, when you’re on a bad run than when you’re winning games.”