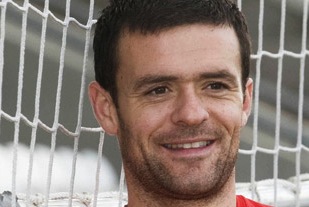 The 34 year-old made the decision to quit full-time football at the end of his 18th season as a professional to pursue at career as a financial advisor in London.

He played alongside Nicky Forster for Brighton in 2008 and Whites’ boss has convinced Thomson that Crabble is the right place for him to combine his new career with semi-professional football.

The Dover squad is currently light on numbers in midfield with Glen Southam and Michael Corcoran yet to sign new contracts. Steven’s arrival will add both experience and quality to Forster’s new-look team for next season.

The Glaswegian made 31 appearances for the Scottish Premier League club this season and more than 100 in his three years at St Mirren. Prior to his year at Brighton, he had spent three seasons in the SPL with Falkirk.

Steven started his career in London with Crystal Palace as a 16 year-old. He broke into the first-team four years later and made 105 appearances for the Eagles at Championship level. In 2003 he joined Peterborough, where he was a first-team regular for two seasons before moving north to Scotland.

Of his career change, he said: “I made the decision last year that this would be my final season as a full-time player. I have been studying for four or five years and I’m now fully qualified and have secured a job in London.

“My wife Bryony is from London anyway and she wanted to move closer to her family. I’ve been a footballer for 18 years and now it’s time to enter the real world.

“Fortunately Nicky Forster heard that I was moving back to London and he called me up. Signing for Dover gives me the chance to continue playing on a part-time basis. I love the game so it’s the best of both worlds.”

One of the highlights of his time in Scotland was scoring two goals as St Mirren thrashed Celtic 4–0 in the SPL on 24 March 2010. This result came soon after a 1-0 defeat to Rangers in the Scottish League Cup Final at Hampden Park in front of 44,000 spectators. Thomson played the full 90 minutes.

Typically an occasional scorer of good goals rather than a regular on the scoresheet, he netted twice for St Mirren this season and 11 times in 120 games for The Buddies.

He now joins Nicky Forster’s project at Crabble, the first target to join the club this summer in an effort to strengthen the squad of 10 existing players already signed on contract.