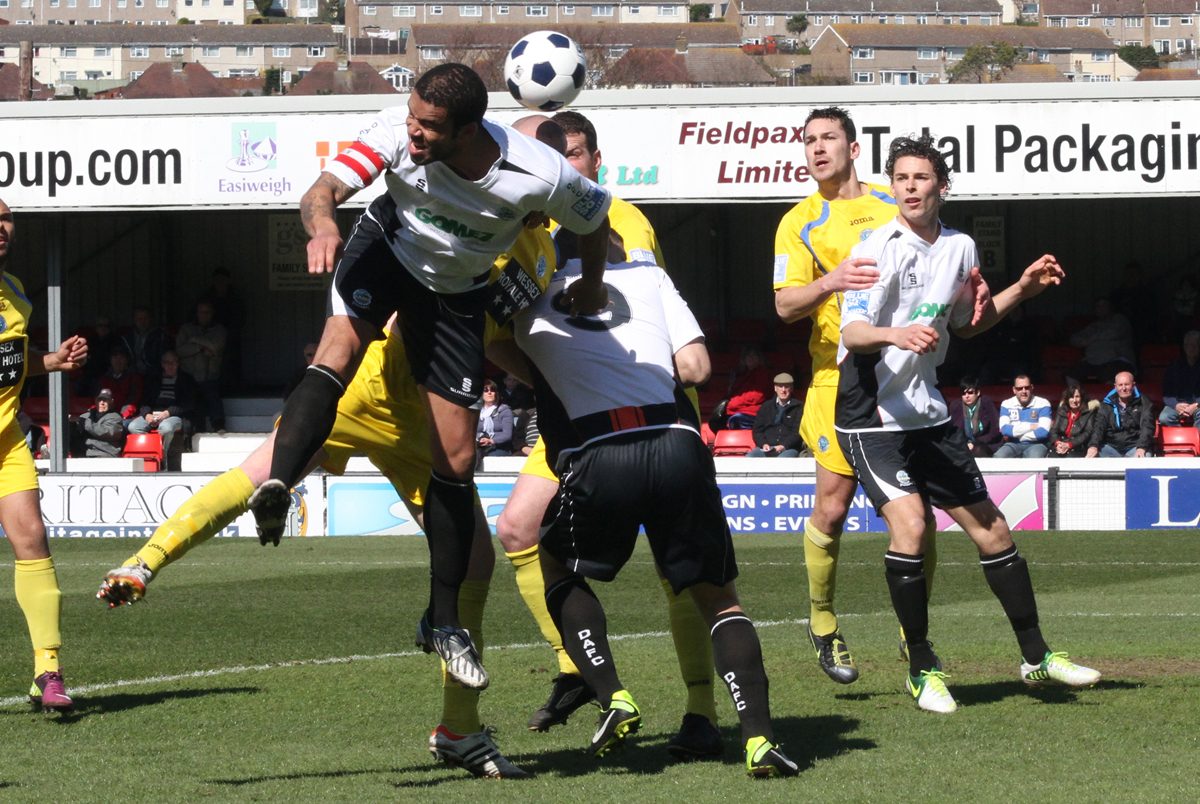 *BS*Whites’ captain Ian Simpemba says the play-off semi final tie is far from over and urges supporters to be the 12th man, saying: “It’s such a bonus to the team when the fans get Crabble rocking!*BF*

Goals from Ben May, Moses Ademola and a last minute free kick from Daryl McMahon in Tuesday’s 3-1 victory away to the league’s form team helped give Athletic vital breathing space ahead of the return leg.

“Moses (Ademola) has been through a lean spell but he’s now getting his name in lights at the business end of the season. He can play in any attacking role and his low centre of gravity will put defenders off balance, whilst Daryl (McMahon) is a great player and was always going to play well.

“Ben has been brilliant all season and no matter who we play, opposition defenders always tell me what a handful he is! I would not want to play against any of them!”

So what was the secret to beating a team that had won seven of their nine games? Simpemba revealed: “All the lads were chatting on the way to the game. In order to get to the final you have to get something from the away game. We really came out of the traps and put their defence under pressure straight away.

“I’ve been in important knock-out games before, and it’s vital to get on top early on, then once you have a strong stranglehold in the game, to not let go.”

Whites may be two goals ahead but the skipper warns that the tie is far from over: “They have some great players and can score goals. Their players would not have liked what happened on Tuesday night and will be looking to grab the headlines with a win at Crabble.”

*Lpic1*The former Ebbsfleet, Crawley and Lewes player went on to say: “Personally, we always look like scoring and if we get the first goal it will give us real momentum. We have struggled to break down the teams that park the bus this season but Eastleigh need to go for it and I’m sure they will from the off. They are good at what they do.”

Simpemba pointed out Craig McAllister as one Dover will need to keep a close eye on in particular: “He and Ben May are the two best target men in the league; the goal Eastleigh scored was from his knockdown.”

Should Whites come through what will no doubt be an enthralling match on Saturday, the victors from the Salisbury v Chelmsford game will be standing in Dover’s way as they attempt to regain Conference Premier status after an 11 year absence.

Ian would prefer a home tie: “They are both good sides but if we manage to get through and play Chelmsford, then the final would be at home. It’s such a bonus to the team when we’re on the front foot and the fans get Crabble rocking!”