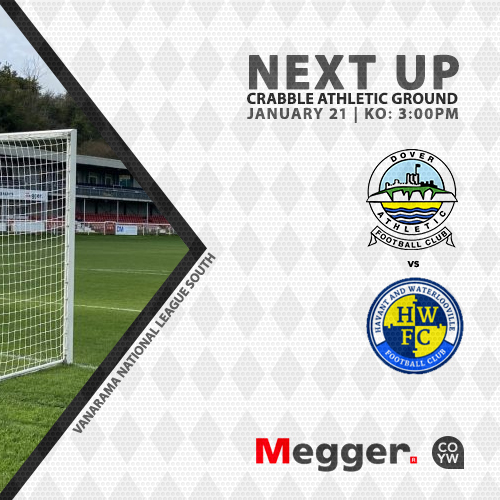 Havant & Waterlooville are up next for Mitch Brundle’s Dover.

High flying Havant & Waterlooville visit Crabble tomorrow looking to continue in their bid for promotion from the Vanarama National South. Mitch Brundle will step into the home dugout at the Megger Community Stadium for the first time since being given the managers job on a permanent basis and is keen to begin his tenure with a positive result. The gaffer will be in high spirits after recent performances and will be looking for his team to kick on for the remainder of the campaign.

Dover will be looking to avenge a heavy 4 – 2 defeat back in  August at the Draper Tools Community Stadium and will hope that their efforts will be rewarded with the right result this time around. The defeat to Ebbsfleet was a sucker punch to the early work put in place by the new boss but Brundle is keen to ensure that the lads get back on track.

‘There was a level of performance in our last home game that I will expect again,’ said the manager. ‘We will need to be on our ‘A’ game. It’s up to me and Mike Sandmann to prepare the team how we want but it is also down to the players to then perform at the levels they have so far which is what we are asking of them.’

We look forward to welcoming you through the gates at Crabble. As Usual it is pay on the gate, cards are accepted.

Let’s go and get those three points, lads.