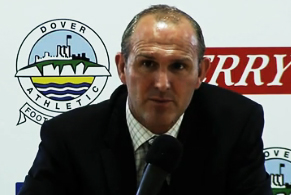 *BS*DOVER ATHLETIC have agreed a new one-year deal with manager Martin Hayes for next season.

*BF*The fine details of the contract will be ironed out once the club know what division they will be playing in – but Hayes will be offered an extension to his current agreement.

Chairman Jim Parmenter said: “We are happy with the job Martin has done this season. He took over in the summer in difficult circumstances after Andy Hessenthaler left and what then happened with Ian Hendon.

“The club reached the third round of the FA Cup in a memorable run that will forever be remembered. Martin did a great job there – and we’re still very much competing for promotion.

“I’ve faith in Martin and that’s why we’ve offered him a new contract.”