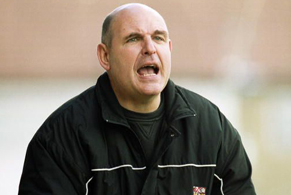 *BF*The Dagenham and Redbridge chief, who has just guided his side to League Two safety, is hoping to bring his team down to Crabble for a pre-season friendly.

And the former Maidstone boss, who sold Hess to Watford from Dagenham in 1991 for £65,000, says that Dover’s title win this season has not surprised him one bit.

He said: “Hessie is just class. He is a top, top professional. I had him at Dagenham and sold him to Watford for good money back then.

“He’s still playing and about to turn 43 years old but that doesn’t surprise me. He’s incredibly fit and a determined, enthusiastic character.”

Hess is playing in a charity match at Priestfield Stadium this afternoon (Sunday) and Still joked: “That doesn’t surprise me, knowing him. He’ll probably go for a 10-mile run in the evening too.”

Jon Wallis played for Still at Dagenham at the end of last season, while on loan from Hereford. Still rates the midfield player and said: “Wallo is a good lad. He did well for us – and I’m sure he is going to keep improving under Hess at Dover.”

The Daggers boss has not confirmed a friendly with the Whites yet but added: “I want to get that game on because of Hessie. I’ve got a lot of time for him.”