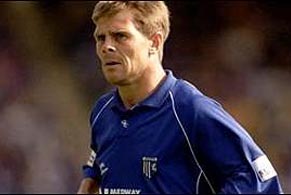 *BS*ANDY HESSENTHALER has been named Gillingham’s greatest player by the Professional Footballers’ Association.

*BF*The PFA is celebrating its 100th anniversary and are producing a range of events to mark the occassion, including a centenary match this weekend.

And they have also named a best player for each club, and in truth it is of little surprise that Hessenthaler was the Gills’ number one.

He is now manager of Whites and admits he is honoured to be given the award.

He said: “If you think about the great players who have played for Gillingham, Steve Bruce to name one, it’s no mean achievement and I’m absolutely delighted – it’s a great honour.

“Gillingham are my club and they’ll always be in my heart and they’re the first result I look out for.”

Hessenthaler – who eventually left Priestfield in January 2006 to move to Barnet – also believes Mark Stimson is the man to turn the club’s fortunes around.

He said: “I know Mark well and he’s a nice guy. He’s gone in and changed things around and brought in a non-league mentality and I think he`ll do well.

“He’s young and ambitious and I think the club needed shaking up. I would love to see him do well.”