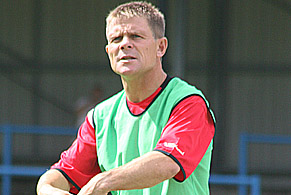 *BS*ANDY HESSENTHALER has challenged his players to up the tempo after a disappointing but profitable performance against Harlow.

*BF*The Whites bounced back from their shock 3-0 defeat at Harrow on Saturday to win comfortably at Crabble on Tuesday.

But the gaffer was only happy with the result.

He told doverathletic.com today: “It was a very nervy performance. We had a number of experienced players missing and, apart from Shaun Welford and Graz up top, it was a young side we fielded.

“I thought the early goal would settle us down but we didn’t play at a high enough tempo and that concerned me a bit.

“But credit to the team for bouncing back with another win. Hopefully, we can kick on now – and go on yet another run and stretch our lead at the top.

“Dartford are next up on Saturday and it’s a chance to get our first double under our belts for the season. I’m sure they’re looking to beat us at Crabble after we’ve gone up there and done them at their place.”

Without wanting to tempt fate, Dover have improved their record in all-Kent derbies this season – and Hess was touching wood as this fact was put to him.

“Definitely touch wood,” he said. “We’ve done much better in these kind of games but this is going to be a tough match on Saturday – all the passion will be there from everyone, the players and fans. We’ve got to be right up for the game and improve on our recent performances.

“Mind you, if someone told me we’d be 10 points clear at the top of the table going into Christmas, I’d have grabbed that in the summer.

“We’re on 48 points now – and should be safe from relegation before Christmas,” he said, with a big smile across his face.

Sammy Moore, who is enjoying a run in the side after a injury stop-start season, believes that the team have great belief in their ability – and that is why they continually are able to bounce back from setbacks.

He said: “This side has a lot of strong characters and we believe in our ability.

“We just always look at the next game. It was a bad day at the office at Harrow, we just didn’t get going in either penalty area.

“The tempo of our play has to be higher than it was on Tuesday. I was delighted that set-pieces we’ve practiced are coming off for us.”

Sammy has happy memories of the 2-0 win at Dartford earlier in the season as he scored a spectacular goal. He admits he already has a copy of the DVD of that game.

And he said: “It’ll be another big game for us against them on Saturday. The fans have always been big rivals – and we hope to send them home happy again.

“If I can score another goal I’ll be happy but the win is the most important thing.”

Another huge crowd is expected on Tuesday when Tooting and Mitcham visit Crabble in a game which is offering free entrance to all supporters.

He said: “That was a wonderful gesture from the chairman Jim Parmenter and hopefully we can put on a show and attract new fans to Crabble.”

Meanwhile, former Gills keeper Kelvin Jack was warming up and training on the pitch before Tuesday’s game.

Hess said: “He rang me to ask if he could come down, as he wants to work on his fitness. He’s a good lad and was doing him a favour. He was impressed by the set-up here.”