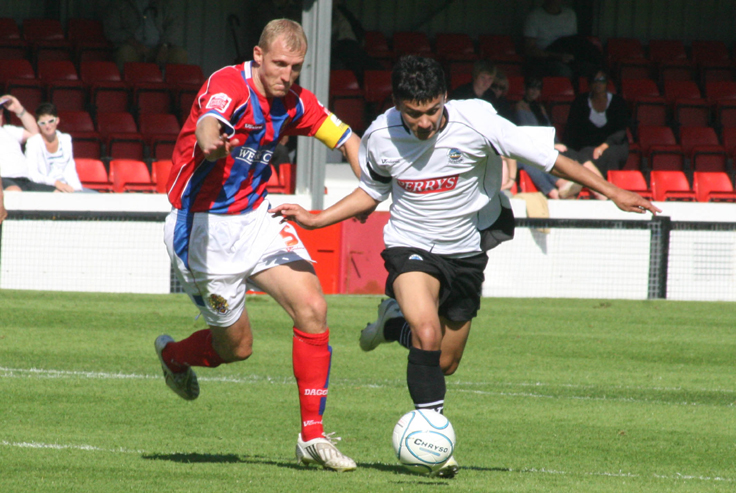 The former Yeovil youngster has committed to the club by signing a two-year contract, having been on the radar of Andy Hessenthaler and Darren Hare since they joined the club last summer.

Hughes is a product of the Crystal Palace youth system, working with Darren Hare when Whites’ assistant manager was at the South London club.

Hare told doverathletic.com this evening: “Jerahl’s a pacey lad. We’ve been impressed with his fitness and ability on the ball.

“I knew him from Palace, where he played in the youth team with Fishy (Matt Fish). We contacted him last year but he decided to sign a one-year deal at Yeovil.

“We’re delighted to get him now, especially as he lives in Brighton. It shows great commitment.”

The skilful winger, who will be 19 in August, went to Worthing on loan at the end of last season, making his mark on Hare again by providing the cross for the only goal in a rare league defeat for Dover.

Speaking after Whites’ 1-1 draw with League Two side Dagenham & Redbridge, Darren Hare said: “I was pleased with our display in both halves today. I thought we were the better side. They brought a few top players on in the second half, including Jon Nurse who scored the late goal.

*Q1*”We had two one-on-ones and the keeper had to make some saves. The nuts and bolts are there, just the finishing touch is required. Our final end delivery needs working on in training.”

Performances so far have impressed fans, especially the 4-0 victory over local rivals Folkestone on Tuesday. New signing Hughes scored the fourth goal that night from a superb pass by Sam Jones, typical of Whites’ passing football.

Darren Hare said of the performance: “We were very very pleased with the Folkestone game but we’re not going to get excited yet. It’s too soon. You can have a good pre-season and then struggle.

“It’s looking good though, the lads are full of confidence. They can’t wait to test themselves against Charlton’s first team on Wednesday.”

Whites’ rearranged game against the Championship club kicks off at 7.45pm and a large crowd is expected to watch Alan Pardew’s team at Perrys Crabble.

*Lpic1*Of the other triallists currently trying to impress, Darren expects some decisions to be made this week.

He said: “Nathan Bailey has done himself no harm up front. Josh Maasbach has signed on a non-contract basis. He asked to train with us this summer after several years out of the game. He’s a strong boy and physical, and despite never playing at centre half before, he’s done really well there.

“However, we have to consider the budget when making decisions on who else to sign.”

Recent injuries to new signings Sammy Moore, carried off on a stretcher against Folkestone, and Olly Schulz are not too serious though.

Darren commented: “Olly’s stubbed his toe. Hopefully he’ll be alright for Wednesday. Sammy is out for another couple of weeks. Also, Craig Cloke (who had an liver operation a few weeks ago) should be back in light training soon.”