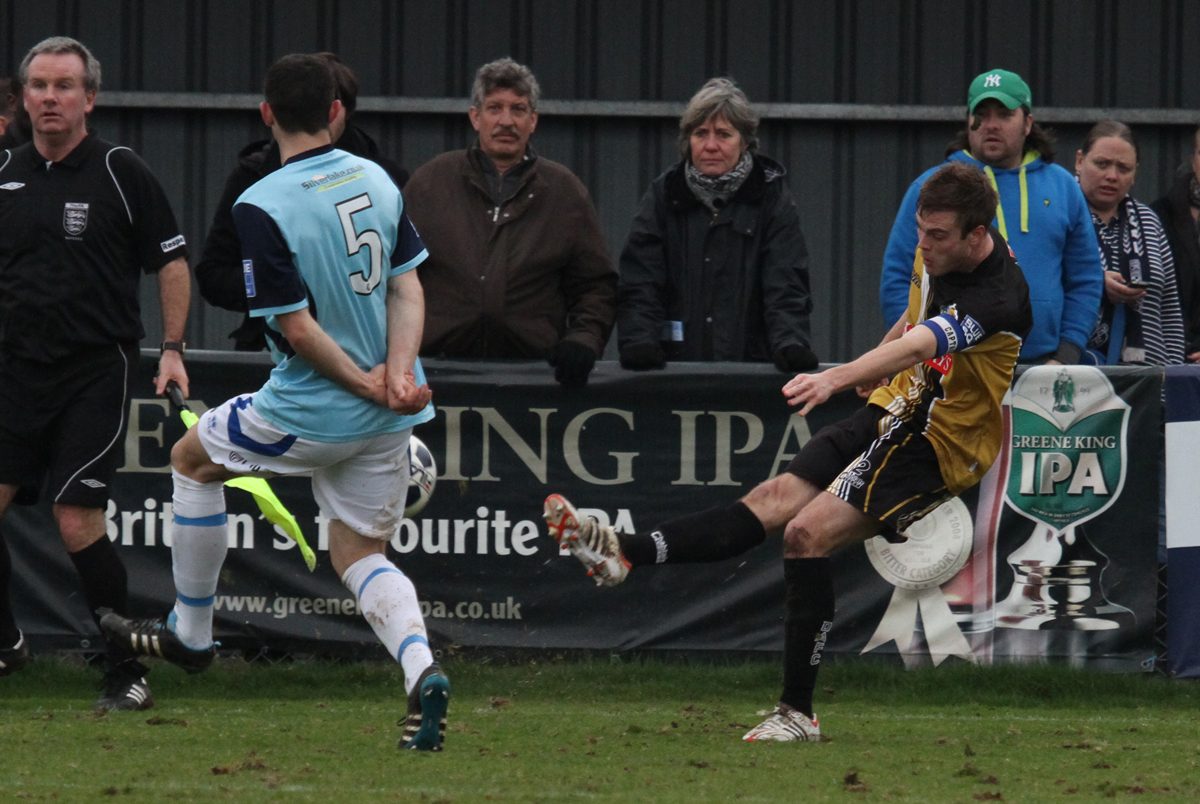 Well, what a fantastic week for Dover Athletic.

Two great victories that puts us right in the mix to grab that all important play-off spot. Not only our victories but also other results have gone our way as well lately which has allowed us to close the gap on Chelmsford and Sutton.

So Saturday saw us travel to Eastleigh, who are a big strong side and right on our tail, so it was a massive game in all accounts.

It was important that we started off well and that’s exactly what we did. We didn’t give them time to breathe and applied pressure everywhere on the pitch.

We grabbed an early lead from a great corner and an excellent finish from the ‘Man in Form’ Billy Bricknell, who sidefooted a nice volley into the net. This is the exact start we needed.

Unfortunately Eastleigh grabbed an equaliser shortly after. This is where we showed our character because straight away we pressed again, resulting in a Dover free kick which was whipped in by Baz, who has been fantastic in recent games so it was nice he could get a goal to reward his performances.

At half time we knew they were going to come at us because if they lost that game then we would pull another three points away from them and their chances of getting into the play-offs would be hit.

From the off we started well again and a great bit of play and fantastic through ball from Donovan, who was instrumental on Saturday, allowed Bill to get on the end of it, take it round the keeper and slide it into the net for his brace.

Eastleigh had to change things and they soon threw more bodies forward and grabbed another goal, but this was the only one they could get after great defending from all 11 players in a Dover shirt.

On Wednesday we travelled to our fourth consecutive away game, this time at Farnborough. After seeing the results on Tuesday night, it was good to see Dartford do us a favour by beating Sutton, which meant winning this game against Farnborough would close the gap even further, so yet another massive game ahead.

Yet again, we flew out the traps and grabbed an early lead from a great set piece from Georgie who found Simpemba’s head for his second goal in three games. We were able to get the ball down and play as the conditions were pretty good for the time of year, so some nice football was played creating lots of chances.

We bagged a second from more good work by Donovan Simmonds. He nicely dinked the ball to an unmarked Bricknell, who (for the cameras) dived in to head the ball home for his seventh goal in six games.

We had some more great chances throughout the game from George, Bill, Terry and also Donovan but couldn’t convert due to some good stops from their keeper.

So our run continues, with only one loss in the last 14 league matches. We are looking very strong from start to finish and this has a lot to do with Niall Clark, who has come in and looked after the players, supplying us with the right ingredients for a fit and hungry team.

With only a few games to go until the end of the season we have found great form and I’m sure this run will continue.

Thank you all for your support.