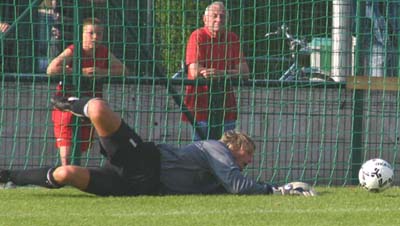 PAUL HYDE urges Dover fans to turn up at the Hoverspeed Stadium and make a racket for the entire 90 minutes in what is being billed as a cup final against Kingstonian.

Hydey, back in goal for the Whites at the age of, whisper it, 41, still has not given up on Dover staying up.

However, the veteran shot-stopper knows it will be an uphill task but believes that Jim Parmenter’s takeover of the club has given everyone – players, fans and officials – a lift.

And there is only one way Dover Athletic is heading under Jim’s regime – on the up.

He said: “Jim has taken control and is already working to stabilize the off-the-field financial problems. The club is in safe hands and, even if the unthinkable happens and we go down, we have a board of directors who will get Dover Athletic winning football matches again.

“I was here when we were battling at the top of the Conference with Kingstonian and now both of us are at the foot of the Ryman League Premier. They’ve had financial problems like ourselves and it’s a shame when you see two of the biggest clubs in the league at the bottom of the table.

“We have easily the best ground in the entire Ryman League and our fans are superb. That’s what I love most about this club. They can make a huge noise and get behind us. We need them more than ever on Saturday because it’s going to be a cup-final.

“Both Dover and Kingstonian go into the game knowing they MUST win to give themselves a glimmer of hope. A win has to be our only target and three points will give us confidence going into the next match. Then, just maybe, we can get some momentum going and if we win three or four on the bounce, it will put pressure on those teams above us.

“We look dead and buried at the moment but I’ve seen teams get out of even more serious situations than ours. Of course, it’s a long shot that we can stay up but I believe we can do it.

“Also, now Jim’s group is in charge, the club really can once again become one of the country’s top non-league teams. If we were to go down, next season the aim will be to win the championship like Wimbledon did – although it will be tough.

“But we could win the title, get back into this league and then really have a go at getting back into the Conference. And if we are to stay up, then we can push on a year earlier. I think the fans should turn up in large numbers on Saturday to welcome Jim back to the club and see us give it a real go against the Ks.”

New Whites chairman Parmenter has already said that he believes the club can start winning matches again, give fans something to cheer about and start climbing the leagues once again. But, first, there is a bit of bumpy ground we must negotiate.

And Hyde agrees and added: “It’s, without question, Dover Athletic’s lowest ebb. But that is behind us now. We could have gone out of business if it wasn’t for Jim Parmenter. He’s been in football for some years now. He was chairman at Margate and knows all about Dover Athletic, having been a director here before.

“Jim is an experienced football man and knows what he is doing. I think these are exciting times for Dover Athletic but the fans need to come to the games, really make a racket and show that we are STILL a Conference club – in terms of our set-up and fanbase.”

Hyde has no plans to retire yet and believes some of the saves he pulled off at Northwood on Saturday show he still is a good keeper.

Only the other week, Sky Sports screened classic FA Cup matches and one of them featured a certain Mr Hyde in goal for Wycombe against West Brom.

He said: “I made some good saves in that game on the tele but I also made some equally good saves on Saturday. The free-kick was hit well for their goal and you have to give their lad credit but apart from that I felt I did very well at keeping them out.

“A player’s place in a team should never been judged on age. Ability is the only thing that counts. If you’re good enough, you should be in the team. If I come out with a zimmer frame one day, that might be the time I’ll have to jack it in.

“Also, if a better keeper comes along, I’ll happily stand aside and let him take my place. I’d love to coach any talented young keeper too. But good English keepers seem to be a rare breed nowadays.”