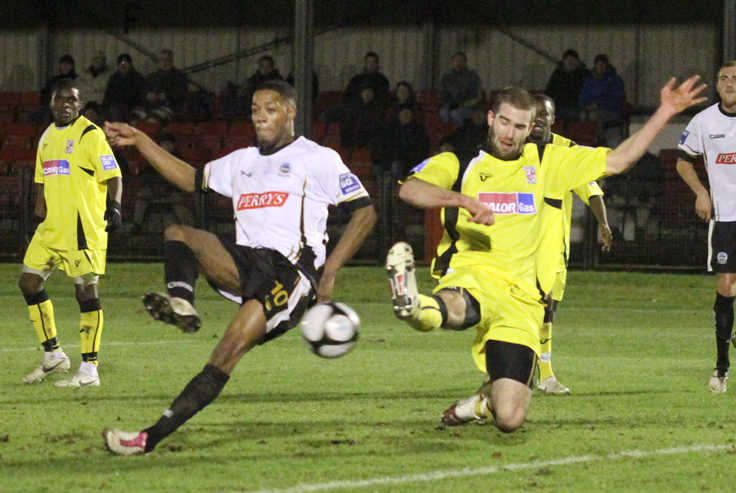 *BS*Dover twice came back to equalise in Tuesday’s 2-2 draw against Woking.*BF*

The draw was a result neither side wanted. Woking have now drawn six of their last nine league matches and are struggling to climb above midtable.

Meanwhile, Whites continue to find wins hard to come by at Perrys Crabble and once again fell victim to goals on the counter attack against Woking.

The game started in difficult circumstances for Dover. Sam Cutler and Rob Gillman both left the field with injuries in the first 10 minutes. Cutler limped badly after lengthy treatment and Gillman struggled off with a shoulder injury.

The Cards were led superbly from the front by lone striker Elvis Hammond. The former Ghana international produced an all-round display of pace, strength, touch and movement to provide Woking with the platform for most of their attacks.

Hammond gave Woking the lead with a clinical finish after a quick break down the left wing.

Donovan Simmonds headed in his 2nd goal for the club from a Jon Wallis free kick to get Whites on level terms before the break. Whites didn’t make the most of some hesitant Woking defending though and Moses Ademola put the Cards back in front from a breakaway.

Sam Long had a goal ruled out for offside, denied after a sweeping move finished with a crisply taken first time shot past ex Wimbledon keeper Alan Little. He netted again after 83 minutes though, curling a shot across goal into the far corner via the outstretched Little’s glove.

However, Woking had the clearer cut chances to win the game. Olly Schulz cleared a shot off the line in the second half. Ademola wasted their big chance in injury time, firing high and wide of the goal with substitute strikers Dave Gilroy and Craig Faulconbridge waiting for a cross.

*Lpic1*Whites stand two points off the play-off positions as the top eight teams look to break away from the rest of the division. Braintree, Chelmsford, Ebbsfleet and Welling are setting the pace at the top, as Bromley continue to fall away.

Dover travel to play-off rivals Farnborough on Saturday in a repeat of the 4th qualifying round FA Cup tie.