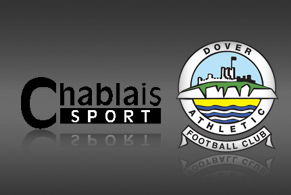 *BS*DOVER ATHLETIC have signed a new kit deal for the new season with Chablais Sport.

*BF*The new Whites kit will be officially unveiled during the pre-season at a date yet to be announced.

But the new strip is swanky and made with high-quality materials using the latest technology.

Chairman Jim Parmenter said: “The CEO of Chablais lives in the area and heard about our plight with our previous kit supplier and offered to help out.

“We’ve agreed a great deal – and are looking forward to an exciting working relationship with Chablais.”

Chablais Sport CEO Paul Jago said: “We’re delighted to be able to work with Dover Athletic as our first senior football club in the UK.

“It is especially pleasing for myself and my family as Dover are our local club.

“This exciting new relationship between Chablais Sport will allow Whites to produce completely custom designed kits as well as being the first in its league to wear the latest European materials putting them where they should be at the head.”