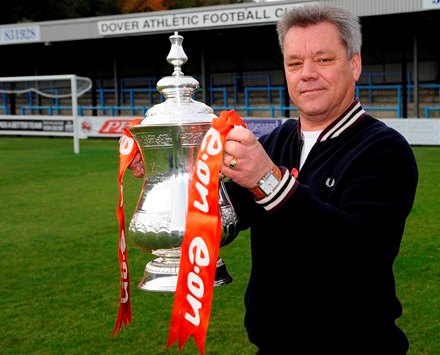 *BS*JIM PARMENTER loves the FA Cup and admits that playing Gillingham away in the first-round was the dream tie the club always wanted.

*BF*The Whites are not exactly known for their cup exploits down the years with the words Tiverton, Met Police, Basingstoke and Hythe making fans shudder.

But at Priestfield the boot is on the other foot for once – where Dover are massive underdogs.

However, with all that happened during the summer, it was a mad twist of fate that Gillingham and Dover would be paired together in the FA Cup first round.

Jim Parmenter – who held the famous FA Cup trophy at Crabble as part of a photoshoot for an article that will be appearing in The Sun on Saturday – said: “The only disappointing part of this draw is that we’re away.

“I honestly believe that we’d get the first-ever true capacity 6,500 crowd at Crabble. The place would be absolutely jam-packed and what an atmosphere.

“But we go to Priestfield, we’ll have nearly 2,500 travelling fans there cheering us on and it’s a game no-one in Kent wants to miss. It should be a great atmosphere there – and it will be a great occasion.

“Yes, a lot of things happened in the summer and we’re trying to draw a line under that.

“We didn’t get the pre-season friendly with Gillingham – but this match is compensation enough.

“In a perfect world, I’d love to get a draw on Saturday and bring them back to Crabble for a replay and a night-time capacity crowd – but if we have a chance to win on the day, then I’m not going to turn that down.

“It’s always the dream of any lower league club to get into the third round and face a Premier League club.”

Martin Hayes is only the second-ever Dover manager to guide the club into the first round. Clive Walker was the other.

Jim believes Dover ended up getting the best deal with Hayes becoming manager.

The Whites chairman said: “Martin knows non-league football really well and he’s been excellent. I like how he’s got the team playing and he’s stamping his own mark on the club.

“It was a tough act to follow Andy Hessenthaler, but he is doing that.”

Hayes added: “I’m just delighted the fans are going to have this day. After all the stuff that’s happened to Dover with their financial problems and relegations down the leagues, I am chuffed that they get something back – a taste of mixing it with the pros.

“We’re going to need the fans at Priestfield to get behind the team and give everyone a lift. We know it’s a big task to win at Gillingham but they do have weaknesses.”