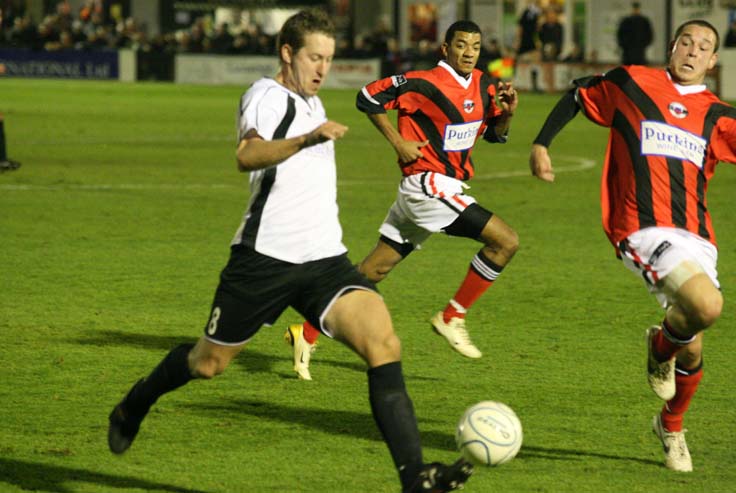 *BS*SHAUN WELFORD was enjoying a few pints with his Dover team-mates after a job well-done in seeing off Worthing.

*BF*The Rebels, who had won six games on the spin, were sent back to West Sussex with their tails between their legs after Frannie Collin’s stunning double and Welford’s strike.

But the popular Whites hitman, who should never have been allowed to leave the club for Ramsgate three years ago, insists: “We’ve not achieved anything yet!”

Welford could be forgiven if he was ordering doubles as the team enjoyed their Christmas party. After all, he was celebrating a double tonic: Dover and his beloved Newcastle winning on the same day.

Although nowadays a Dover victory is not rare, the same cannot be said for his Toon heroes.

The proud Geordie, who used to live near team-mate Alan Pouton up in the North East, said: “I’m very happy tonight. Dover win 3-0 and Newcastle beat Birmingham with a last-minute winner.

“The jury, for me, is still out on Big Sam Allardyce at Newcastle, but it certainly isn’t out on Andy Hessenthaler.

“Our gaffer is doing a great job and I had a big chat with him and the chairman Jim Parmenter before re-joining the club from Ramsgate.

“He wants to achieve things – and I wanted to play a part in that. I was at this club before at the wrong time.

“I think I played about nine games in the first-team under *BS*THREE *BF*different managers. There was no stability and Dover Athletic were on a downward spiral.

“But I ended up going to Ramsgate and did well there for a club that was on the up. Yet, despite this, I always looked out for Dover’s results straight after each game I played.

“This is a bigger club and when I heard Hessy wanted to bring me back I didn’t hesitate in making the decision to return.

“You only have to look around the place to see the potential. The ground and the large army of fans – along with the entire set up.

“Now I want to be part of the journey in helping take Dover Athletic up the divisions under Hessy.”

Welford has settled in well and already grabbed three goals – and the hitman insists he is confident of finding the target on a regular basis.

He said: “The way the lads are playing, I feel I can score every match. Frannie is brilliant to play with up front.

“Frannie is a livewire and defenders can never rest with him on the pitch. He puts in some great crosses, and I only had to get my foot on one against Worthing to score. It was easy.

*Lpic1*”He took his goals well too. The first one was brilliant. In tight games, that extra quality that Frannie brings the team can suddenly find you a breakthrough.

“We’ve got that quality across the park and it’s a pleasure to play with such good players.”

Welford insists that while he and his team-mates were having celebratory drinks after the game, no-one was getting carried away with opening up a four-point lead at the top of Ryman One – with games in hand too.

Whites chief Hessenthaler has stressed several times that league titles are never won before Christmas and there are plenty of tough games and challenges to come.

He said: “The gaffer has kept our feet firmly on the ground. While it was an excellent result against one of our promotion rivals, nothing is decided this time of year.

“It’s great to be sitting top but we need to be in that position after the last ball is kicked this season.

“We need to keep working hard, playing good football, taking our chances, keep clean sheets. If we do all these things then we have a great chance.

“I know all about winning this league as I was in Ramsgate’s title-winning side a couple of seasons ago. It takes a real team effort to do it and we’re only too aware of how much football is still to be played.

“The challenge is for us to keep churning out the results in our mission to get the club back into the Premier Division.”

Hess said: “Shaun realises we’re creating a lot of chances and that’s good for strikers. He could’ve scored a couple more had he shown a bit more composure – and that’s something we’re working on as a team.

“It was an excellent performance and one of the best we’ve produced this season. The conditions were not great, yet it didn’t affect us. We played some superb stuff and Worthing just couldn’t live with us. We should’ve won by five or six.

*Lpic2*”The pitches are now going to start getting heavy and the elements come into play. To win this league, we’ve got to be able to deal with those things – and I know we’ve got the characters in our dressing room who can cope with that.

“Frannie was brilliant today. He had one of his best games for us and is so important to the team. The whole side, to be fair, were superb and the fans will have realised that and appreciated everyone’s efforts.

“But now we want to widen the gap between ourselves and the chasing pack. We’re not getting carried away now but can be happy with the progress we’ve made so far. We’ve just got to keep that level of performances up and our winning run going. That’s eight now, let’s make it nine and then 10.”

Gillingham star Nicky Southall has attended a number of games this season, prompting speculation he is going to sign for Whites.

That is pie in the sky, says Hess, who insists that his old friend is purely taking in games and catching up with his pals.

Hess said: “There’s nothing in it at all. Nicky’s a close family friend of mine, someone I’ve played with and managed at Gillingham. He’s also an old mate of Alan Pouton’s.

“Nicky likes to take in some of our games and see how we’re getting on. He’s a Gillingham player and to be honest with you he’s got a few good years left in the Football League. It’s great to see him down here.”