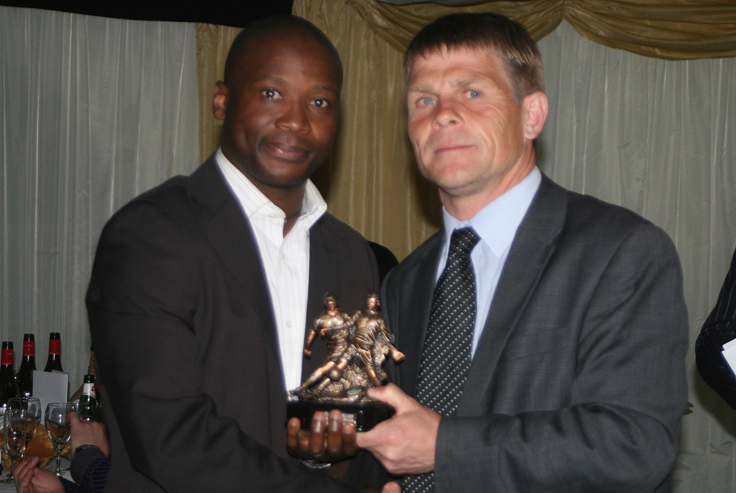 *BS*THERE’S no debating it. John Keister has been the club’s best player during the past season.

*BF*Not a bad feat, considering the number of quality players that have been in superb form during our championship-winning season.

But always modest, John is not a man who likes to take the credit. For him, it is a team game – and the rewards of the last nine months have been achieved by a collective effort from the entire squad.

John, who won both the supporters’ and players’ player of the year awards, agreed to take part in a question and answer column for the website. Here he answers our questions.

*BS*JA: *BF*John, a cracking season for the club – and you ended it by lifting the trophy with Craig Cloke after the Sittingbourne game. How did that feel?

*BS*JK: *BF*It felt great after a really hard season, it was the icing on the cake, much effort have been put in, so achieving that moment was priceless.

*Lpic1**BS*JA: *BF*We fell just three points short of the title last season. What did we do this season that we failed to do last season to romp away with the championship?

*BS*JK: *BF*This season we were so driven to win the title, so the mentality and approach was different, the team effort played a huge part in achieving that Goal while last season we fell short in different areas.

*BS*JA: *BF*Obviously there is vast experience in the side, with the likes of Hessie, yourself, Pouts and Craig Wilkins. However, the bulk of the squad is made up of young players … how excited are you at the prospect that as a team you can only get better, with so much talent capable of improving?

*BS*JK: *BF*I am very excited because I know they can only get better with the experience of this season.

The work ethics and mentality that has been instilled in them already can only make them better prepared to do well and keep improving.

*BS*JA: *BF*The chairman knew you very well at Margate. You’re with him again here at Dover. What insight into Jim can you give the fans from your dealings with him as a club chairman? Clearly he is very driven and ambitious.

*BS*JK: *BF*Dover Athletic typifies what the chairman is all about! He’s driven to succeed on whatever he does, he settles for nothing but the best in his ambition to make Dover progress as a football club. He’s someone you can trust as he’s very honest and straightforward.

*BS*JA: *BF*At the end of last season, you won a lot of friends among the fans after you spoke out about the flak you had received after some people questioned your commitment to the club. How satisfying is it for you now to be regarded by the majority of supporters as one of the most outstanding players on the club’s books?

*BS*JK: *BF*There was no greater satisfaction for me than the club winning promotion and giving the fans something to celebrate!

*Ppic1*I have never questioned my commitment to the club neither did I question myself in my efforts, so having that fact known in such a celebrated way is a good feeling.

*BS*JA: *BF*You were called the Assassin at Walsall … do you like to think that you still live up to that nickname? (And, by the way, could you tell us how that name came about?)

*BS*JK: *BF*I feel flattered knowing such a reputation precedes me, however I would like to think I have calmed down a bit over the years but i still carry that burning desire to assassinate sometimes!!

The name came about when a good friend of mine Stuart Watkiss, who is assistant Manager at Grimsby, started calling me the Assassin in training because of the way I tackled. The rest is history!

*BS*JA: *BF*The Premier Division is our next stop. Obviously, you’ve played in the Football League and the Conference. How do you rate Dover’s chances of climbing back up the pyramid to Conference level? And also do you think there is any chance whatsoever of Crabble one day hosting Football League football, Jim Parmenter’s ultimate dream.

With an ambitious chairman and stability that dream is achievable!

*Lpic2**BS*JA: *BF*Hess has made an instant impact. Could you give us all an insight into why this man was so highly regarded, and still is, as a player – and of course a manager?

*BS*JK: *BF*He’s a football man with outstanding pedigree, backed with a good mentality and desire to do well.

Most of all he aims to do the best in whatever he does.

*BS*JA: *BF* Finally how do you think we’ll fare next season?

*BS*JK: *BF*Am confident we’ll do well because we have got a good group and momentum from this season to take us though – hopefully to another successful season if we keep believing and working hard.