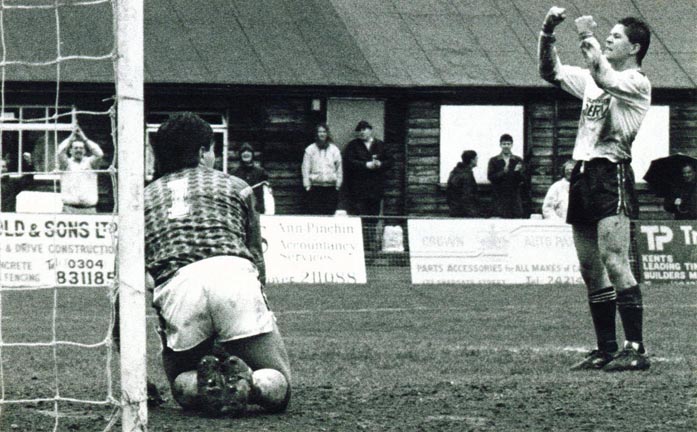 *BS*TIM DIXON, a Whites legend from the Chris Kinnear era, has returned to Crabble as part of Andy Hessenthaler’s new team of staff.*BF*

Dixon, an inspirational player in Whites’ Southern League days, will work alongside Hessenthaler and Darren Hare this season as Scouting and Development Officer.

Hess said: “Tim is Dover through and through, he knows the area. I played against him in non-league and have always known him to be a good guy.

“Tim will do some scouting for us, watching future opponents and any players we’re looking at. He will also monitor the development of our under-18s and reserves.

“Darren and I will liaise with Tim closely and he will make the decision on which young players should be given the chance to step-up to the first team.”

Hess said: “Andy had a spell at Gills with Darren and he worked at Chatham last season. He’s a qualified physio and has already met the players at training. Matt Bourne’s had an injury so they’ve been working together.”

Hess praised former physio Frank Clarke for his service to the club, saying: “Frank does a lot of work behind the scenes. He will work closely with me as secretary this season.”

Hess also told doverathletic.com about the start to pre-season training and getting used to the part-time schedule.

He said: “Training’s been very positive and hard work for the lads. The attitude’s been first class and I know they’re enjoying it. Clokey says it’s the best pre-season he’s had.

“We only have two hours in the evenings so there’s a lot to cram in. Fitness levels are good and the trialists are making an impression.”

“We’re going to have a practice match on Saturday. A few French boys are coming over for that. One is a right winger, where we are light, and another is a centre forward, which we’re not really looking at but we always want to see potentially good players.”

The Dover boss admitted that his squad needs bolstering on the right side, saying: “We are light at right back and goalkeeper too. Matt Fish from Crystal Palace has impressed at right back and can also play central defence, and the American keeper also looks good. We just need to see them in a match.”

One player who has made an immediate impact at training and been offered a contract is Jack Tanner. The youngster was promoted to the first team squad last season, after spells in the reserves and at Ashford, and featured heavily in Whites’ minor cup runs in a variety of positions.

Hess said: “Jack’s been very impressive in training and has a lot of potential. He was out of contract in the summer but he’s been offered a new deal. He can play right wing, which is another area where we’re light at the moment.”