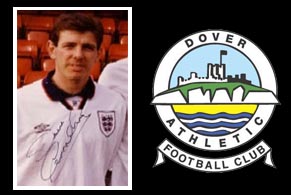 *BS*Whites legend David Leworthy is coming to Perrys Crabble on Saturday for the game against Woking.

He will collect an award for being voted by fans in an online poll as DAFC’s best ever player. The presentation will be made on the pitch at 2.50pm.*BF*

The prolific and mercurial striker won a poll on the unofficial forum, finishing above the likes of Adam Birchall, Simon Wormull, Jason Bartlett and Russell Milton.

David confirmed this week that he would be attending the match on Saturday. He will collect the award from supporter Callum Snell, who organised the poll.

It is apt that David returns to Crabble on the day we face Woking, a club against which he enjoyed his greatest and most widely remembered moments in a Dover shirt. The most magnificent of which was scoring all four goals in a classic 4-3 win against the Cards.

Not only a great scorer of goals but a scorer of great goals, David is remembered for his skill, ability to find space and team ethic. A great example to young players, he inspired his teammates and a generation of supporters.

Don’t miss out on the chance to welcome the club’s greatest player back to Crabble. We are expecting a good crowd for Saturday’s game against the league leaders so please arrive early.