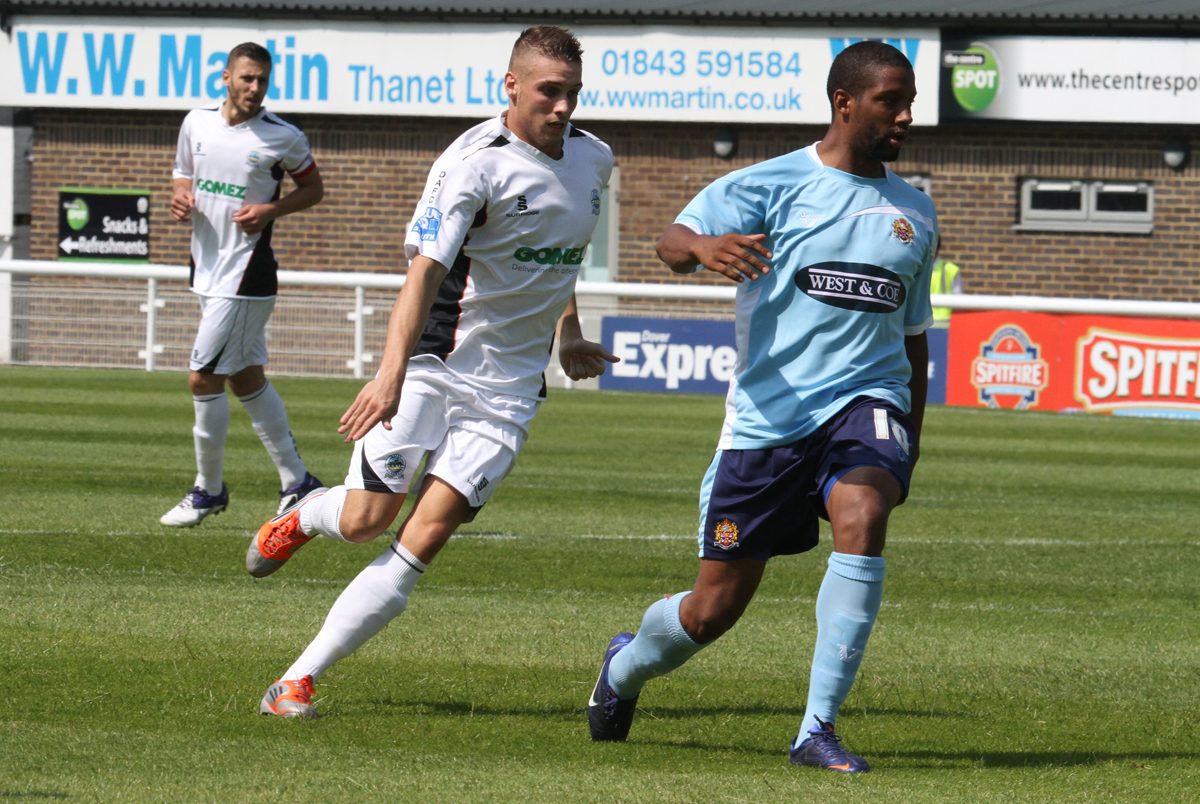 *BS*Midfielder Liam Bellamy talks to doverathletic.com about his recovery from injury, his new teammates and singing Dover songs on the team coach.*BF*

The 21-year-old suffered a knee injury in the club’s 1-0 friendly victory at home to AFC Hornchurch four weeks ago, and admits that he initially feared the worst:

“As soon as I went down, I heard a pop – so naturally, I was worried. I had only been on the field for nine minutes so to come off that quickly was concerning.”

He has good news for Whites fans, though: “My first training session back from injury is this Thursday. I’m hopeful of regaining match fitness quickly – although I’ve missed most of pre-season – and I’m naturally a very fit player so should recover in a short period of time.

*Q1*”It’s surprising how fit you need to be in this league, and I don’t think a lot of people outside are aware of that.”

The ex-Brentford youngster admits that it may be a big ask for him to regain his first team place however: “All the time we are winning games, it’s going to be hard to push someone out of the team. That’s what Chris (Kinnear) wants, though – competition for places.”

Bellamy signed for the club from Ebbsfleet United in a busy summer for both clubs, and is delighted to join up again with players he’s previously played alongside: “Of course, I’ve got experience of playing with Nathan (Elder), Craig (Stone) and Ashley (Carew) – but I know some of the other boys well too. I played with Tom Murphy whilst he was at Charlton, and am good mates with Ricky Modeste too.”

Bellamy, who made 35 appearances in the Conference Premier last season, is delighted with the side’s start to the season, especially the hard-fought 2-1 victory over Ebbsfleet on Tuesday night: “What a great game – we’re delighted to have won our first two matches. There are three of four sides in this league that everyone is desperate to beat – and we are one of them – so to get off to a 100% start is great. We’re confident about the season ahead.”

With experienced players alongside him such as Terrell Forbes and Nathan Elder, Bellamy is delighted with the blend of the squad: “Terrell and Nathan have vast Football League experience, so it’s great to train and play with them – however, we’ve also got some exciting youngsters coming through. Lloyd (Harrington) has a wand of a left foot and once he’s recovered from his injury picked up against Ebbsfleet, he’ll be a vital player for us this season.”

*Lpic1*Bellamy feels there is a real sense of unity at the club, which he feels is vital: “I’ve been so impressed with the side since I’ve joined – both on and off the field.

“We’ve got a fantastic squad, but also one that is very close. After the Gosport match, on the coach home, we were all singing Dover songs and having a lot of banter – even Robin, our kit man!”

Having bleached his hair bright blonde recently, he has certainly given his team-mates some ammunition – but explains it was a spur of the moment decision:

“In all honesty, I was just bored – it was an impulse decision, and when I mentioned to one of the lads about doing it, they dared me to – so I had to do it.”

And their reaction? “I’ve certainly received some stick from them about it – but one of the team has said they actually like it, and is considering doing the same to their hair!”