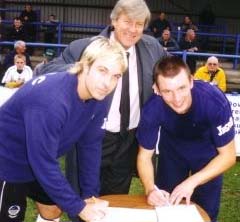 Dover go into this weekend’s second bite of the FA Trophy cherry against Forest Green Rovers with a virtually fully fit squad to choose from.

The only definite absentees will be recent signing from Folkestone James Miller, who appeared for Invicta in an earlier round, and assistant boss Mark Patterson who is still suffering from illness.

Richard Langley will have to decide whether to stick with the 3-5-2 formation which caused Weymouth problems, particularly in the opening spell of the game, or go to 4-5-1 which has worked well away from Crabble.

Dover are keen to make the most of the second chance they have been given following the expulsion of Barnet and will be confident of getting a result and inflicting revenge on a Rovers side who defeated the Whites 3-0 at Crabble in the fifth round last year.

Energetic midfielder Lee Spiller is confident that an upset is on the cards:

“We are a more organised outfit this year and we have nothing to fear, the Barnet situation is a bonus and we need to make the most of it. They have had a decent couple of results but if we can get at them, something we failed to do last year, we can cause an upset. It is probably an easier game than the Barnet tie and we unsettled them at times”.

The Whites have a pretty poor record against their Gloucestershire opponents and have lost the last six meetings. They will be up against a side who have turned the corner since the departure of boss Colin Addison and recently came from behind to defeat Conference leaders Chester 2-1 as well as grabbling a last minute equaliser against Woking.