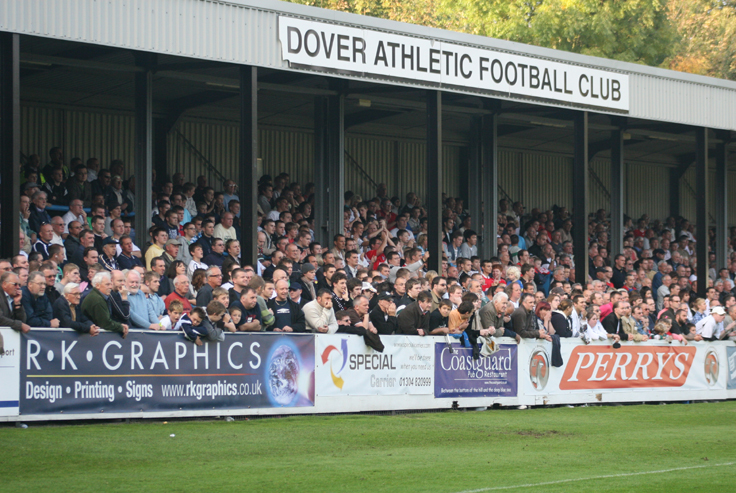 *BS*JIM PARMENTER today has sent out a rallying cry to the River End faithful – “Let’s get Crabble roaring again.”

*BF*The Whites chairman is concerned that some complacency has set in among supporters that the Ryman Premier title is as good as wrapped up.

But, despite our massive lead at the top of the table, Staines are proving worthy challengers and are meeting us punch for punch in the title race.

Bromsgrove famously made up a similar deficit during the 1991/92 season to pip Whites for the Beazer Homes Premier League title and with it promotion to the Conference.

Also some of our star performers, notably Frannie Collin and Shaun Welford, have drawn criticism from a small section of fans.

Jim told doverathletic.com: “We are enjoying so far the best season in Dover Athletic’s history.

“Frannie laid on two goals and scored one against Hendon on Saturday, yet a few fans shouted criticism at him from the terraces.

“That for sure would not help his confidence and Frannie has been absolutely tremendous for us during the past two seasons.

“But my biggest concern is how quiet Crabble has become recently.”

It is no coincidence that during our glory days of the 1990s under Chris Kinnear that the crowd, although bigger, become notably more quiet.

Just a few seasons ago when the club was fighting relegation and subsequently during our promotion challenges in Ryman One under Clive Walker, the noise level was much higher.

Jim said: “It’s strange that the crowd is noisier when we’re struggling. I don’t know if there is something psychological about supporting a winning team where crowds become quieter.

“Old Trafford and the Emirates, for example, are often very subdued in comparison to stadiums that are not so used to watching winning football week in, week out.

“I really want to hear non-stop support and make Crabble a very special place – and one that scares the life out of our opponents.

“The fans can really make a massive difference to where this club is going. I think they can help us get all the way to the Football League.

“So I hope people can bring a friend along to the Carshalton game on Saturday and make a huge noise and show the players what they think of them!”