After the weekend’s fixtures were postponed as a mark of respect following the passing of Her Majesty Queen Elizabeth II, Dover return to action against Kent rivals Dartford at Crabble tonight.

We, like all other clubs in action today, will observe a one-minute silence before kick-off while management, staff, and players, will also be wearing black armbands as a mark of respect.

The visitors’ squad will include a couple of familiar faces to Dover fans  – defenders Connor Essam and Tom Bonnor – both of who have captained Dover in the past.

As for Dover, winger Luke Wanadio will be playing against a club he had three spells with while Tyrone Sterling had a loan spell at Princes Park. Striker Alfie Pavey also played for the Darts and scored 22 league goals for them in the 2017/18 season.

Tom Murphy (pictured) scored twice as Whites extended their unbeaten run to 12 Conference Premier games with a big win against Dartford at Crabble. 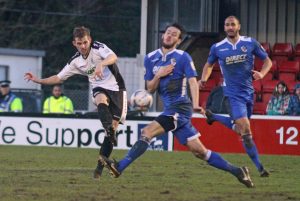 The win, Whites’ biggest of the season at that stage, was also their first league triumph against their Kent rivals since the 4-2 success in December 2008.

Murphy’s curling finish made it 3-1 before Liam Bellamy fired home a fourth, Barry Cogan’s penalty made it five before Murphy completed the scoring 10 minutes from time.

Jordan Higgs and Mitch Brundle are both back in the matchday squad after missing the game at Eastbourne through injury.

Alex Green (elbow) and Kieron Agbebi (hamstring) are both unavailable.

The game kicks off at 7.45pm but if you are unable to make it, BBC Radio Kent will be providing commentary HERE