Tuesday night under the lights will see Dover playing hosts Oxford City for the first time since 2013.

Manager Andy Hessenthaler’s squad is unbeaten on the road in four National League South games and will be aiming to extend their three-game unbeaten run against an Oxford side that drew 2-2 against visiting Hemel Hempstead Town last Saturday.

Andy Hessenthaler’s squad will be unchanged from the one that drew 1-1 against Chippenham Town at Crabble last Saturday.

Captain Lee Martin, who was sent off on Saturday, is available tonight but will serve a one-game ban in the FA Trophy Second Round tie at Isthmian South Central Uxbridge on Saturday.

Whites lead 3-0 at half-time in the FA Cup First Round proper tie at Crabble thanks to goals from Sean Raggett, Nathan Elder, and Barry Cogan. 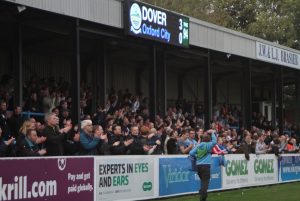 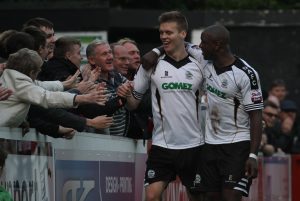 We will have live updates on Twitter – @DAFCLiveText – follow us and get all the news as it happens.

For fans heading to the game wanting to wear the same shirts as the players, we will be wearing our navy blue kit.

Tickets are £2 cheaper if purchased online.