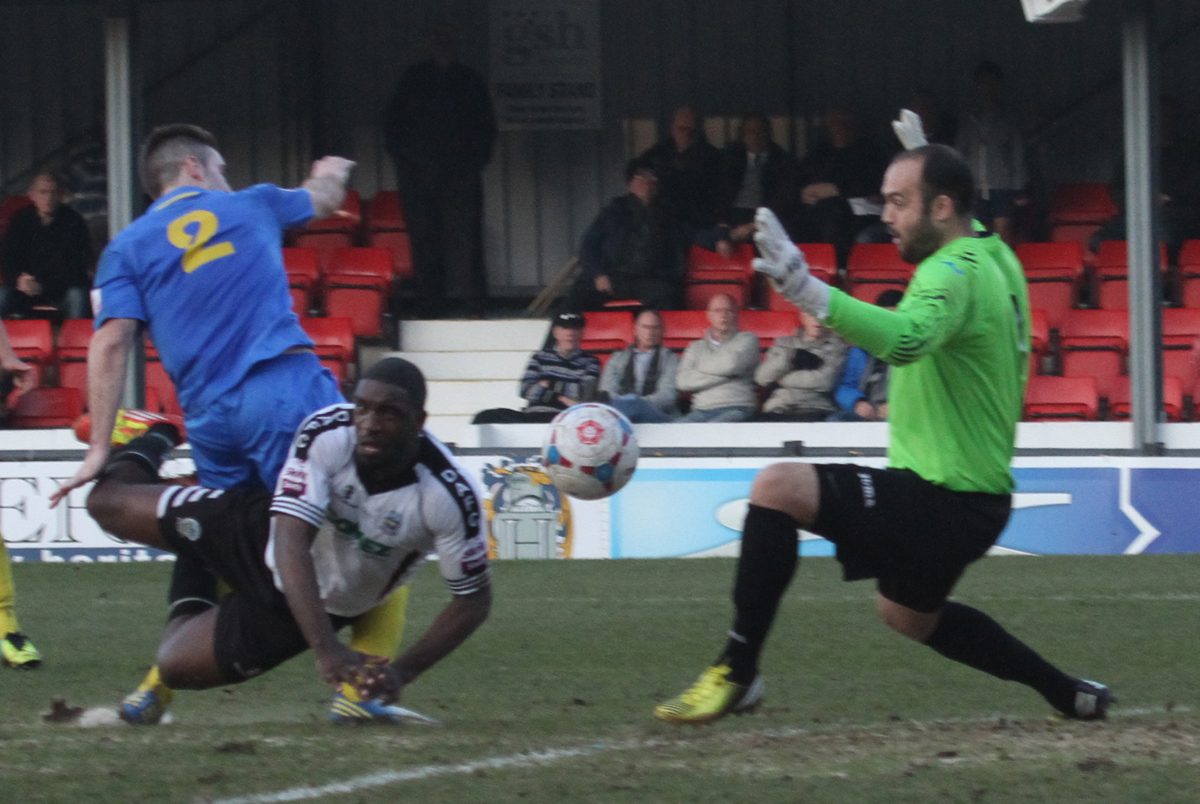 Nathan Elder’s sensational diving header in the dying seconds against Basingstoke on Saturday kept Whites in the play off hunt in a game that did not really come to life until the last few minutes.

Manager Chris Kinnear was still despondent at the level of his team’s performance against a Basingstoke team that had played only two days earlier. ‘Maybe in the back of their minds, the players thought it was going to be easy – but they always get wound up for Dover. Jason Bristow has built that side over a number of years and they are decent with a lot of experience. They did tire towards the end and we had chances and it is disappointing that we gave such a silly goal away early on. If it was 0-0, they would not have been trying to hang in there as much and even though we weren’t playing well, it makes it that much difficult.’*Q1*

Chris also added. ‘We are very disappointed about the urgency shown and I am sure they did not do it on purpose. At least we had the guts to get back at them – Though we need to fathom why we were not enthusiastic throughout the game.’

After what was a generally poor game during the normal ninety minutes, the match sprung into action in an incredible finale. Firstly Basingstoke were denied what looked like a blatant penalty when Mitchell Walker appeared to fell Kezzie Ibe as they looked to kill the game off. Then Sean Raggett thought he had equalized when it seemed the ball at crossed the line before being cleared away, with the Dover players incensed at the decision to disallow his effort. With the remonstrations ongoing, Basingstoke ran up the other end and only a fine stop from Walker stopped whites being killed off.*Lpic1*

Elder then levelled matters with a brilliant stooping header and though it looked like Whites had secured an undeserved point, Basingstoke hit the underside of the crossbar at the death with Walker pulling off two seemingly impossible saves from the rebound to somehow keep the match at evens.

‘It was unbelievable in the last few minutes, said Kinnear. ‘Alright we got a point and it was very exciting at the end. But before the game, it was one that we were aiming to win.’ He also added ‘We had talked about the game, but the players did not do exactly as they were told. We tried to overplay a bit, we did not pass it and we did not collect it either. People were not making the right runs for others to pass it too, but we have to learn from it. It happens and we cannot run the players down.’

There was some suggestion that the reintroduction of the wingback system was partly to blame, something that Kinnear was quick to dismiss. ‘it does not matter what formation you play, which was a fluid formation. You need to show urgency and enthusiasm, but we were not quite at it.’

One positive was the second half performance of Moses Ademola who came off the bench the replace Tom Murphy at half time. Chris though was still undecided as to whether the former Eastleigh and Woking man would start the next game. ‘Moses done really well and played really well Tuesday, it was a toss up between him and Tom Murphy as to who would start. He has been good in training and it is not easy coming on as sub – we shall see about Tuesday as we are all a bit raw still.’

Dover face table toppers Bromley on Tuesday night at Hayes Lane, who themselves have had a wobble at the worst possible time, losing their last two games with Sutton and Eastleigh eating away at their lead. *Lpic2*
Nevertheless Kinnear is expecting a tough game and is expecting more from his troops. ‘They are still top, but hopefully the lads will try and lift themselves more than they did today.’