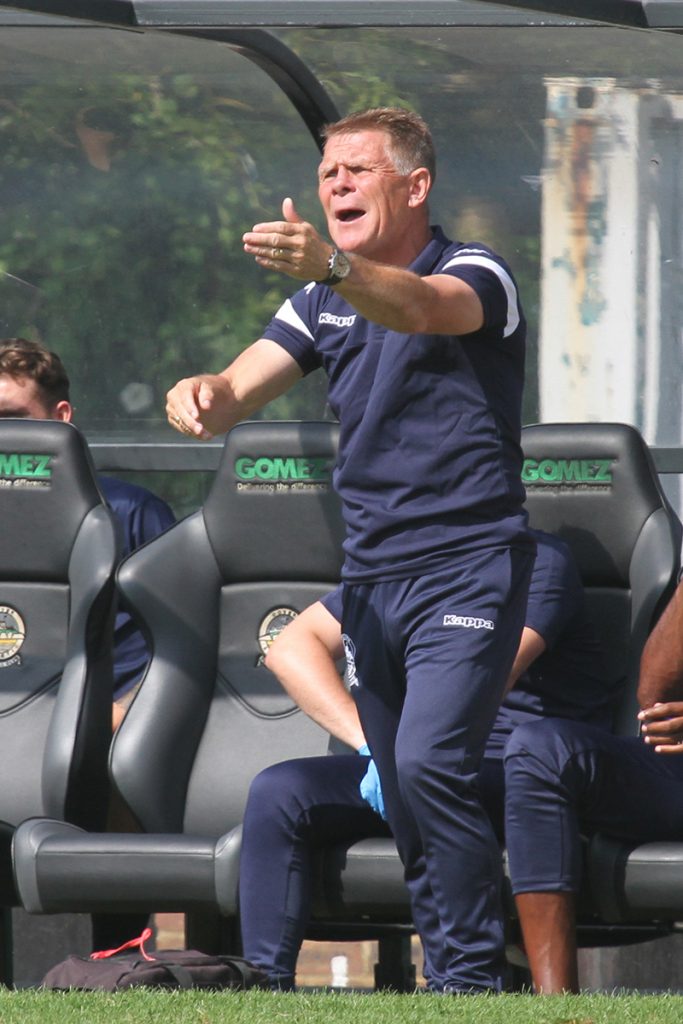 Dover slipped to a second consecutive defeat to begin their Vanarama National League campaign as Boreham Wood claimed a 1-0 win at Crabble on Bank Holiday Monday.

It was a third straight win for Wood, who have yet to concede a goal and climbed to third in the table. Whites remain on minus 12 points and rooted to the foot of the table after the League’s pre-season points penalty.

Despite being forced into two changes with Ryan Hanson and Reda Johnson picking up knocks in Saturday’s 2-0 defeat at Maidenhead, Andy Hessenthaler’s side began brightly and won a couple of early corners but the visitors always looked dangerous on the break.

Big Will Evans had already headed over the bar for the visitors when they came close to a breakthrough when Jamal Fyfield slashed a far-post volley over the bar – and River End stand – from six yards following a deep cross from Josh Rees on 11 minutes.

Dover really should have been infront at the other end just a minute later when Travis Gregory did superbly down the right, picking up a return pass from Ricky Miller and firing a low cross into the middle where Aaron Cosgrave lay in wait. His first-time shot back across goal was however too close to Nathan Ashmore and the former Ebbsfleet keeper was able to parry before the ball was hacked clear.

Scott Boden saw a shot blocked at his near post by Dover keeper Josh Bexon before, mid-way through the half, Miller gave Whites fans a reminder of his talent when he chased the ball down on the left and fizzed in a fierce drive from 25 yards which flew narrowly past the far post with the flying Ashmore beaten.

Kane Smith hooked a volley over Bexon’s bar and saw an inswinging free-kick from 40 yards fly inches past the far post after evading everyone.

The visitors took the lead four minutes before the break when Williamson’s pass in midfield was charged down. Mendy picked up the loose ball and was able to drive forward and spread to Smith on the right whose low centre was agonisingly turned in at his near post by Jake Goodman.

It was nearly 2-0 on the stroke of half-time when former Whites striker Tyrone Marsh reached a lofted through ball and lobbed Bexon, stranded in no man’s land after rushing off his line, only for his effort to bounce well wide.

The second half was a cagey affair with plenty of stoppages which eventually led to Whites boss Hessenthaler being shown a yellow card by referee Gary Parsons for his protests. Chances were few and far between as the visitors seemed largely content to run down the clock.

Mendy did flash a low cross in from the left five minutes after the restart but the sliding Marsh was unable to connect in the centre while Evans tamely headed a free-kick straight at Bexon.

Koby Arthur and James Caton were sent on by Hessenthaler to try to change the game while Academy youngster Alex Green came off the bench on 75 minutes to play in central defence after a nasty clash led to Jake Goodman walking off looking very woozy.

Caton stung Ashmore’s palms with a near-post cross-shot from the left byline with time running out but despite plenty of late possession and some set-pieces in dangerous areas, Dover were unable to muster their first goal of the campaign infront of a crowd of 1,517 – the first National League spectators at Crabble in 534 days.