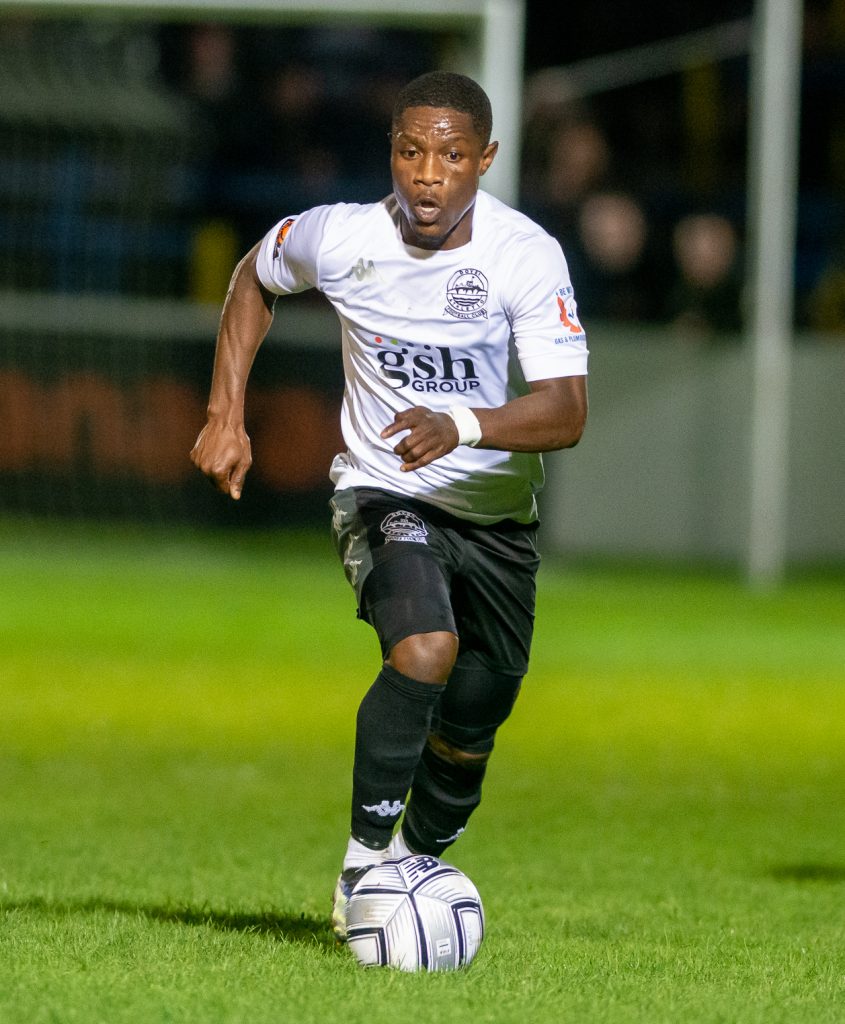 Koby Arthur’s stunning volley could not prevent Dover slipping to another Vanarama National League defeat at home to Stockport County on Saturday.

Whites produced perhaps their best performance of the season to battle back to go into the final half-hour level at 2-2 thanks to Arthur’s strike and Ben Wiliamson’s first goal for the club from the spot, however, the superior fitness and class of the hugely ambitious visitors proved decisive in the end as they ran-out 5-2 winners.

Boss Andy Hessenthaler handed starts to Reda Johnson and Yannis Drais and Dover made a bright start, though the early chances fell to the visitors as Ollie Crankshaw fizzed a shot past the angle of Adam Parkes’ post and bar after just four minutes and the on-loan Watford keeper held a low shot from Paddy Madden seven minutes later.

At the other end, some good hold-up play from Aaron Cosgrave saw him tee-up Arthur soon after, only for the Whites livewire to see his shot deflected just over the bar.

Ryan Hanson tried his luck with a low strike from 20 yards on 20 minutes but Scott Quigley broke the deadlock at the other end three minutes later when he collected a pull-back, cut inside, and fired in a shot that took a huge deflection and looped into the net past the helpless Parkes.

Dover rallied and were level just after the half-hour when Hanson’s quick feet saw him fouled in the box by Ethan Pye, allowing Williamson the chance to send Ethan Ross the wrong way and slot home his first Whites goal from the spot.

Dover continued to press and Danny Collinge saw a powerful goalbound header blocked on the line – possibly by teammate Johnson – as the hosts pushed for a second but three minutes before the break they were unable to clear a John Rooney corner allowing Madden to sweep home at the far post.

A thunderous 25-yard strike by ex-Bolton Wanderers captain Antoni Sarcevic came back off the underside of the bar in added time, with Quigley’s follow-up effort ruled-out for offside.

After the turnaround it took just five minutes for Dover to draw level as the impressive Arthur showcased superb technique to lash a dropping ball into the top corner on the volley from the edge of the box past the stunned Ross.

Rooney – brother of former England star Wayne -showed superb vision to beat the backpedaling Parkes with a 45-yard lob soon after but saw his audacious effort thud into the crossbar.

The pivotal moment arrived when sub Travis Gregory was denied by Ross at the far post with Williamson unable to turn in the rebound. Moments later Dover hearts were broken at the other end as the defence parted allowing Crankshaw to slot in the loose ball after a Parkes parry on 67 minutes.

The wind left Dover’s sails and the full-time visitors’ superior fitness proved telling in the final 20 minutes. Parkes had already denied Quigley and Rooney when defender Liam Hogan rose to nod home a far-post corner to make it 4-2 on 76 minutes.

Parkes patted down another rasping Quigley drive before he and Madden helped tee-up sub Ben Whitfield to tap in a stoppage-time fifth.

The defeat leaves Dover 17 points from safety with a game in hand and 32 fixtures remaining.

County, who were led by interim boss Dave Conlon after the midweek sacking of Simon Rusk, moved up to ninth, four points below the play-off places.