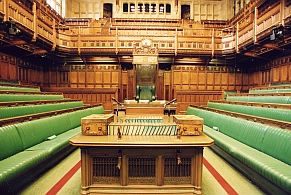 Any football fan given half the chance will always try and ‘big up’ their team to anyone who cares to listen.

But one of Dover’s fans recently had a slightly more influential audience than most.

However, those listening on this occasion are more used to watching the action at the Despatch Box rather than the penalty box.

MP for Dover and Deal Charlie Elphicke praised the club’s community efforts during a recent House of Commons debate on the Finance Bill and next years Champions League Final which had led onto the topic of funding for local sport.

Mr Elphicke described himself as a ‘passionate and strong’ Dover Athletic supporter and added that local clubs like Dover “Are part of the cement that holds together all our communities. They should be celebrated just as much, if not more, than all the big-money clubs”.

Speaking after the session in the Commons Charlie stood by his comments, “DAFC plays a really important role in our community in bringing people together and helping to give Dover a great sense of community spirit. Watching Dover play is a great way to spend a Saturday and I hope to be able to spend more time at Crabble next season”.

It’s definitely fair to say that his comments aren’t unfounded as the team has always endeavoured to give something back to the Dover area.

Last season the club donated a total of £2000 to local charities ‘The Pilgrim’s Hospice’ and ‘The Demelza Hospice Care for Children’ whilst spearheading a number of other community projects in and around the town.

The Dover Athletic Football Academy has also gone from strength to strength through the years providing top class training for local young players. The quality of the Academy has been all too evident with Sean Raggett, Tom Axford and Lloyd Harrington all progressing to the senior side, with the icing on the cake coming when both Axford and Harrington gained international experience representing the England Schoolboys team.

But the Academy news doesn’t finish there; the next few weeks will see the completion of the highly anticipated 3G all weather pitch at Abbey School. The development of the facility has been supported by Dover Atheltic, who will use it as their primary training venue – the pitch will also be made available for use by the community.

The Whites are also not afraid to try out new ways to involve the community in far more frontline positions. On the 1st July Crabble will open its gates for a special trial as local players are given the opportunity to try and secure a place in the Dover squad for the coming season. The unprecedented session is aimed at giving those players in the area that haven’t been able previously attract the attention of the club a chance to showcase their skills.

But it’s not just MPs that have championed Dover Athletic, other local leaders have also stepped forward to reiterate Charlie’s claims.

Mayor of Dover, Cllr Anne Smith, believes that the club helps give the local community a sense of identity. She said “The great thing about Dover Athletic is that you get people from all parts of the area involved”.

The Mayor whose family has a long association with local sport in the town also acknowledged the hard work of Dover’s various youth teams, stating “I’m all for anything the gets young people involved in sport”.