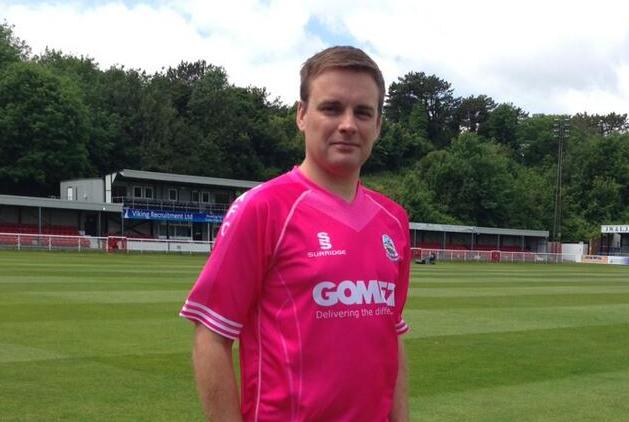 *BS*Dover Athletic’s new replica kits are starting to arrive at Crabble, including the special pink away kit – as modelled here by director Steve Parmenter.*BF*

A pink strip has been chosen to raise funds for a breast cancer charity. The club will donate 50% of all profits made from the sale of the pink replica shirts.

Replica shirts ordered by supporters are currently being manufactured – delivery date to be confirmed. The White Cliffs of Dover feature as part of the design on the back of the shirt.

*Lpic1*We are also pleased to see that Surridge Sport, our kit supplier, has been confirmed as the official Technical Kit Supplier for the Football Conference for the next two years.

Surridge Sport became Dover Athletic’s kit supplier in 2012 and also works with clubs such as Bury, Barnet, Mansfield and Shrewsbury. The company will now supply bench wear to all Conference clubs.

The Football Conference is pleased to officially announce Surridge Sport as its new Technical Kit Supplier for 2013/14 having signed a 2 year agreement to supply bench wear for each of the 68 clubs throughout the competition.

Surridge Sport, who have a wonderful heritage are recognised as the perfect Partner for the Football Conference.

Brian Lee, the Chairman of the Football Conference said: “On behalf of our member clubs, I am delighted to welcome Surridge Sport with its wonderful history and track record into the Football Conference family of Sponsors. We are positive that they will prove to be a great addition. The quality of their bench wear and apparel will be appreciated by all management and players.”

Based in Burnley, they currently supply Bury, Barnet, Shrewsbury Town and Mansfield Town, amongst an array of football teams and they see the deal with The Football Conference as a great opportunity to extend their presence within the football sector.

Charles Lord, Group Director at Surridge said: “This new deal with the Football Conference gives us the exposure we require to obtain a prominent position in the national arena of the game, through our fantastic product base and the service we offer. The model we operate gives the clubs exactly what they want, when they want it and at a competitive price. Our service and product is a breath of fresh air in a highly competitive market.

“The early indications we have received from the Football Conference Board and its members is highly encouraging and we look forward to a great relationship.”

Surridge Sport was founded in 1867 and is one of the oldest sports brands in the world. The brand is not just synonymous with cricket but with football as well. The SS Cobbler was the first synthetic football to be used in the World Cup finals in 1958, when Pele entered the scene. The SS UFO was the official football used by the FA for years and the iconic white with a red band was the ball superbly struck by Justin Fashanu in 1979/80 for the goal of the season for Norwich against Liverpool.