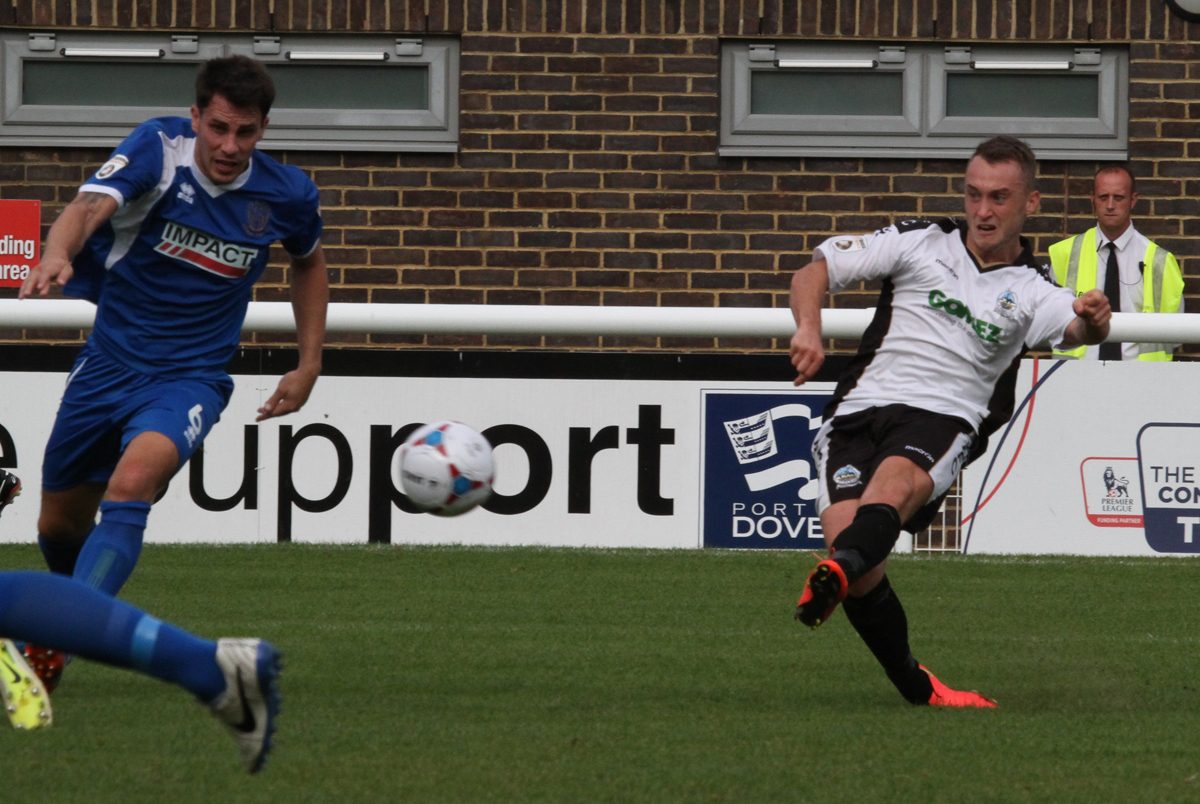 *BS*With a quarter of the Vanarama Conference played, Dover Athletic welcome Aldershot Town to Crabble on Tuesday night as they attempt to secure back-to-back victories for the first time this season.*BF*

Loanee Ricky Miller bagged his third goal in six appearances in the 1-0 victory over Alfreton Town last Saturday. It’s a win that lifts Whites out of the drop zone and above Alfreton on goal difference.

Miller and midfielder Solomon Taiwo are set to return to Luton Town after the game with Aldershot, as their initial one month loan deals at Crabble will expire at the end of the month.

Goalkeeper Mitch Walker will be unavailable for at least another eight weeks with a hand injury that he picked up on September 16 against Dartford.

Winger Ricky Modeste is still unavailable for selection after an ankle injury he picked up against Eastleigh on August 23.

Italian winger Christian Nanetti made just his second start of the season against Alfreton and he will be hoping to keep his place in the starting XI. He has made nine appearances as a substitute so far this season.

Andy Scott’s Aldershot Town made the long trip north to Gateshead last Saturday and managed to come away with a 1-1 draw which puts them in 14th in the table.

The Hampshire club nearly came away with all three points, but Gateshead’s Danny Wright scored a late equaliser which meant the Shots had to settle for one point.

Scott’s squad travelled 600 miles round trip to Gateshead last Saturday, and will have an extra 100 to make it to Crabble on Tuesday.

Striker Josh Scott suffered a groin injury in their win over Lincoln on September 20 and didn’t feature against Gateshead. However he could be fit enough to play against Dover. Scott scored 23 goals in 112 games for Dagenham.

Club captain Chris Barker has missed the last seven games with a calf injury and is unlikely to be fit on Tuesday night.

Midfielder Mark Molesley is also unlikely to make the squad for Aldershot against Dover. He has had tendinitis problems and had missed the last five games. Molesley has made four appearances for the England C team.

Former England Under 18 International Tristan Plummer may feature for the Shots on Tuesday night. He has been suffering from hamstring issues this month.

Aldershot have won four, drawn four and lost four so far this campaign and have managed to score one goal in each of their last four games.

Both Dover and Aldershot have only won once away from home this season, both defeating AFC Telford United.

Despite only picking up one victory, the visitors to Crabble on Tuesday have only conceded five goals on their travels so far this season.

Brett Williams was the Conference third top scorer last season with 24 league goals to his name, and he has already notched six goals so far this campaign, including a brace against Grimsby in August.

Dover have picked up more points in September than the Shots who have managed five, while Dover have achieved six points.

The two clubs have met just twice before, both in the F.A Cup. The first time was in October 2000 where Whites lost 1-0 at the Recreation Ground in the fourth qualifying round.

Most Whites fans will remember the last time the two teams met, where Adam Birchall scored twice in a 2-0 win over the Shots in the F.A Cup 2010/2011 season. The win meant Dover reached the F.A Cup third round for the first time in their history.

Last season, the Shots finished in 19th position with 51 points. Had all of last seasons bottom four clubs been relegated, Aldershot would have survived on goal difference.

In the 2012-2013 season, the Shots were relegated from League two finishing bottom of the league and suffered various financial difficulties towards the end of that season.

However they had four successful seasons in fourth tier of English football prior to relegation, even managing to make the play-offs in the 2009-2010 campaign.

Whites are scheduled to travel too the newly named Electric Services Stadium on January 24.

The match on Tuesday night will not be segregated.

Supporters unable to attend the game on can follow @DAFCLiveText on twitter for regular updates during the game including team news, match action and photos.