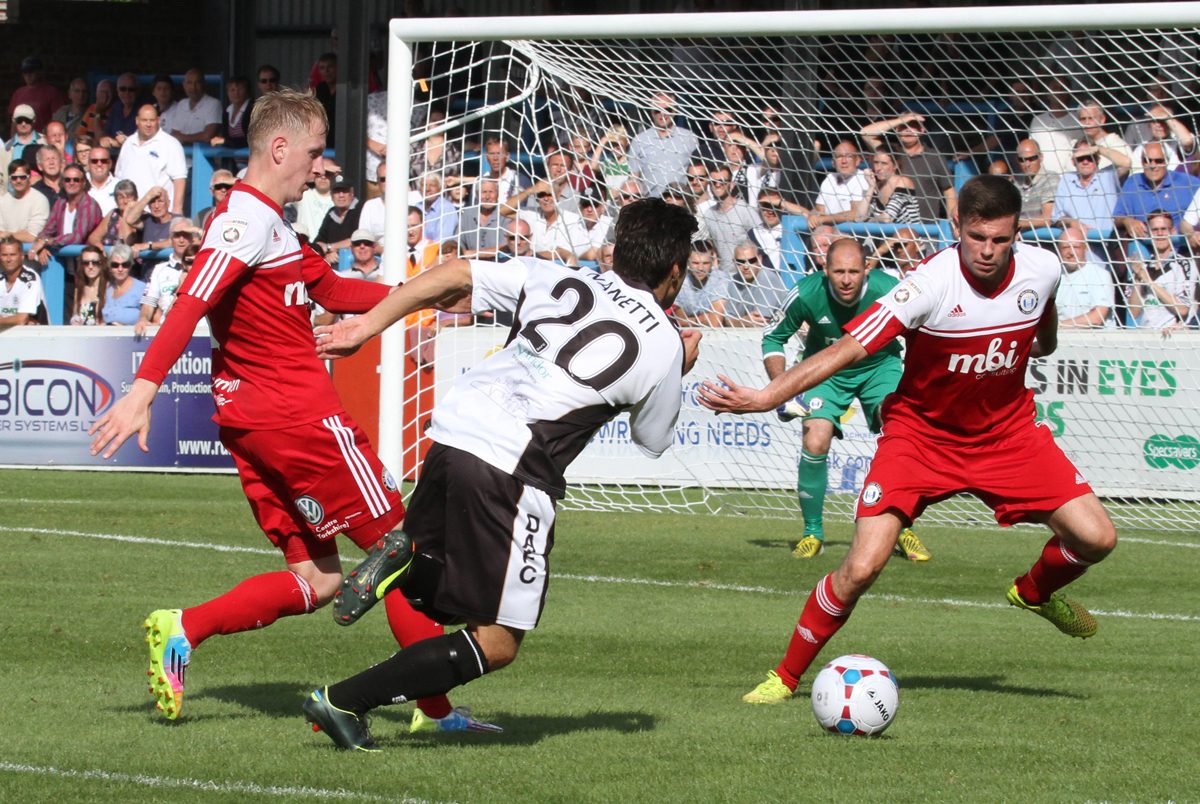 *BS*Dover Athletic are looking to bounce back from their opening day defeat to FC Halifax Town at Crabble as they travel to Braintree Town on Tuesday evening in their next Vanarama Conference fixture.*BF*

Whites fell to a narrow *Link1* at the hands of Halifax on Saturday afternoon thanks to a Scott McManus goal early into the second half.

However, both manager Chris Kinnear and his team remain upbeat after putting in a reasonable shift against the Shaymen – who reached the play-offs of this division last season.

And plenty of optimism is being brought in ahead of Dover’s fixture at the Cressing Road Stadium where they look to secure their first Conference Premier victory since winning 3-1 at Stevenage Borough in April 2002.

*Lpic1*Matt Lock (injury) is a doubt ahead of Tuesday night’s game but a player set to return for Whites is fellow new signing Stefan Payne after completing a two-match suspension.

The striker – who served his suspension for getting sent off at Canvey Island whilst playing for AFC Hornchurch last season – will offer more pace up front for Dover, should he be selected to make his competitive debut.

Meanwhile, Braintree – nicknamed ‘the Iron’ – will be without utility player Matt Paine after suffering an injury following a tackle at their opening day defeat at Macclesfield Town.

But one player who may take part for the hosts on Tuesday is striker Michael Bakare – a name that will sound familiar to Whites fans after featuring on the books for Dover last season, scoring four times in all competitions.

The Iron are currently enjoying their fourth season in the top-tier of non-league football after gaining promotion through winning the Conference South title in the 2010/11 season.

*Q1*They enjoyed a superb season after finishing 6th in the Conference Premier last season, having just fell short of the play-offs by three points despite suffering a huge backlog of fixtures due to several postponements midway through the season.

They were not known for their goal-scoring but they finished with the third best defence in the league after conceding only 39 goals, with only Luton Town and Cambridge United – both promoted, of course – having a better record with only 35 goals each.

However, they have not started the new season as they would have wished after losing 1-0 at Macclesfield on the opening day, courtesy of a first-half goal from Chris Holroyd.

But they will still prove tough opposition for Kinnear’s men as they look to go at least one step further in their quest for the play-offs this season, although Kinnear remains optimistic as he told doverathletic.com: “Braintree were 6th last season and Alan Devonshire has a lot of experience and they have done quite well, but why shouldn’t we try and win?

“I saw them in pre season, but they have changed their side a bit since then.”

*Lpic2*Whites possess a good record at Braintree after remaining unbeaten in their last three visits at the Cressing Road Stadium.

Craig Wilkins’ equaliser helped Dover claim a point in a 1-1 draw in April 2005, although it did not help Whites avoid relegation from the Ryman Premier that season.

That was before they also recorded two 2-1 wins in the Conference South, thanks to goals from Adam Birchall and Olly Schulz in the 2009/10 season and strikes from Ben Hunt and Birchall in the following season – with the latter result one of only two home losses Braintree suffered in their Conference South-winning campaign.

Whites are expected to take a bigger number of fans than usual after chairman Jim Parmenter has kindly paid for a supporters coach, with Parmenter explaining to doverathletic.com: “it is our first away game in the Conference Premier and it would be nice to celebrate it by getting as many fans as possible to the match – it seems like a good way to mark the occasion”.

*Q2*If fans have missed out on the free coach, then anyone driving to the game are suggested to leave the M25 at junction 27 and head north on the M11, before leaving the M11 at junction 8 and heading east on the A120 before following the A120 for 16 miles until reaching ‘Galley’s Corner’ roundabout (with McDonalds on the right). Then they should take the first exit into Cressing Road, with the entry to the ground approximately three-quarters of a mile on their left (Clockhouse Way) – which is sign posted.

The nearest rail station to the Cressing Road Stadium is Braintree – which is just under a mile away.

However, if fans are unable to get to the game, then live text coverage will be provided on Twitter via *Link2*.