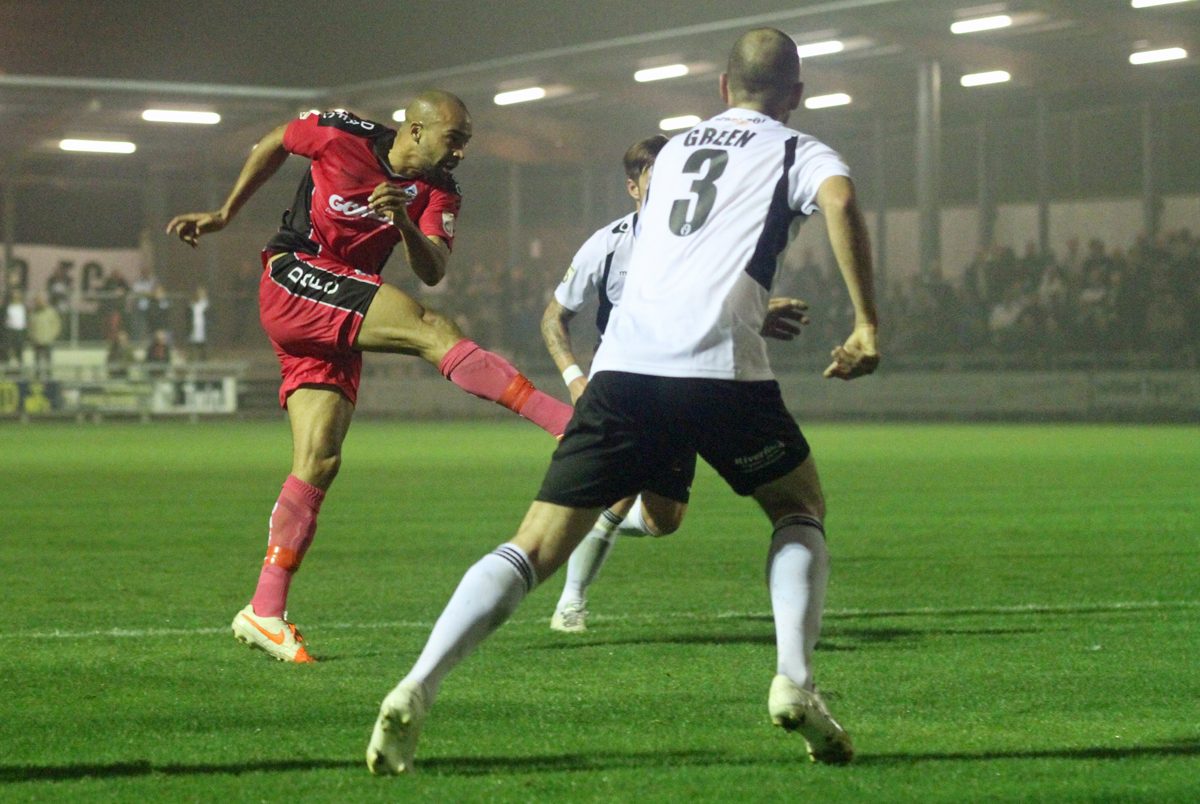 *BS*Dover Athletic look to climb further up the Vanarama Conference as they welcome Kent rivals Dartford to Crabble on Saturday.*BF*

Whites progressed to the last 16 of the FA Trophy after a 0-1 win at Havant and Waterlooville last Saturday courtesy of Ricky Modeste’s first goal of the season.

Chris Kinnear’s side will now travel to Woking after they beat Oxford City 2-1 in a replay on Tuesday night, with just three more rounds until the final that will be played at Wembley stadium.

Dover and Dartford last met on September 16 where the Darts won 2-1 despite Whites taking the lead and dominating the majority of the game, as well as missing a stoppage time penalty.

Three points on Saturday could see Whites climb as a high as 10th position, while a victory for the visitors will give them a much needed three points and confidence boost.

*Lpic1**BS*TEAM NEWS FOR DOVER*BF*
Goalkeeper Mitch Walker, who had to be substituted after picking up a hand injury the last time the two teams met, has recently recovered from that injury which left him on the sidelines for almost four months. He was on the bench against Havant therefore Andrew Rafferty is expected to start between the sticks.

Winger Ricky Modeste will be pushing for a start after coming off the bench to score the crucial goal in Dover’s last game.

Chris Kinnear junior is also close to a return from an injury and maybe fit for Saturday.

*BS*TEAM NEWS FOR DARTFORD*BF*
Dartford made two changes from the side that played Burgess Hill in the FA Trophy last Saturday. Danny Harris and Nathan Green started while Tom Bradbook and Peter Sweeney dropped to the bench.

Nathan Green was recently bought on a free transfer from Dagenham & Redbridge.

He has made three appearances since signing out of a possible three and is expected to play on Saturday.

Goalkepper Deren Ibrahim is expected to start in goal for the Darts against Dover.

Versatile player Lee Burns captained the Darts in their last game due to the absence of club captain and top scorer Elliot Bradbook. Bradbook has scored seven goals in the league this season but is a major doubt for the Dover game.

*BS*OPPOSITION FORM*BF*
Dartford progressed to the last 16 of the FA Trophy with a 1-2 victory against Ryman South side Burgess Hill Town.

On Tuesday night, the Darts slumped to a fourth straight league defeat after losing 1-2 to nine-man Halifax Town.

Dartford took the league through Harry Crawford but Halifax equalised before half time as well as seeing Lois Maynard get a red card before the break. Shaymen forward Scott Boden then scored a second half penalty, before James Bolton then saw a red card for serious foul play but Halifax held on to pick up the win.

The Darts have only won one league match in their last 10 games and have conceded 20 goals in the process.

They also haven’t kept a clean sheet in the league since August 23, which was a goalless draw against Torquay. Dartford have only kept two clean sheets in all competitions all season.

Only Nuneaton (26) have scored less league goals in the league than the visitors to Crabble on Saturday.

*Lpic2**BS*MATCH INFORMATION*BF*
A home win on Saturday will be Dover’s first league victory against Dartford since winning 4-2 in December 2008.

However Whites did record a 3-2 win in November 2009 in the FA Trophy.

Dartford are currently playing in their third consecutive season in the Conference after they achieved promotion via the Conference south play-offs in 2012 defeating Welling United 1-0 in the final.

However last season, the Darts were one of two teams given a reprieve as Hereford United and Salisbury City were demoted following financial troubles which enabled Dartford another stab at the Conference.

For fans who cannot get to Crabble for the Kent derby on Saturday, please follow @DAFCLiveText on twitter for live updates.