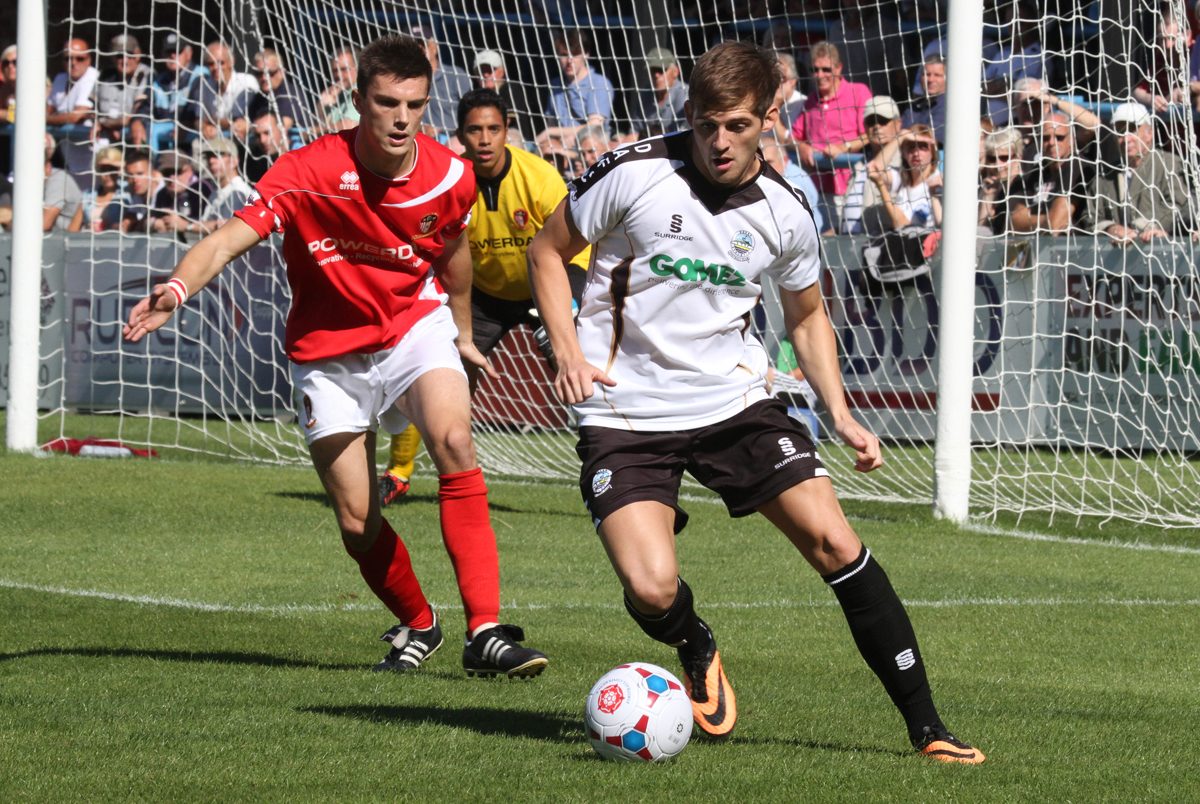 *BS*Dover Athletic’s play-off fate will be decided on the final day of the season as they travel to Woking’s Kingfield Stadium to face relegation-threatened Hayes & Yeading United on Saturday.*BF*

Whites’ play-off rivals Havant & Waterlooville fell to a surprise 3-1 home defeat to Maidenhead United on Wednesday evening, which has left them only two points ahead of Dover on equal games.

To secure a play-off semi-final appearance – now likely to be against Sutton United – Whites must beat Hayes while hoping Havant fail to defeat already-relegated Tonbridge Angels at Longmead.

Dover’s slim hopes of clinching 4th spot are now over after fellow play-off rivals Ebbsfleet United won 2-1 at Concord Rangers in a re-arranged game after their original tie was abandoned due to a local power failure.

Steve Brown’s side’s appeal against the re-arranged tie going ahead was dismissed on Wednesday but they needn’t had worried after former White Daryl McMahon’s late free kick secured his side a place in the play-offs.

But Whites’ play-off hopes still remain intact, with promotion to the Conference Premier – a league Whites have not participated in since 2002 – in everyone’s minds.

*BS*TEAM NEWS:*BF* There are no new fresh injury worries ahead of Saturday’s game, which means manager Chris Kinnear is expected to name the same side that started Easter Monday’s 1-1 draw against Whitehawk at Crabble.

*Lpic1**BS*WHITES’ OPPOSITION:*BF* Like Dover, Hayes still have everything to play for at this pivotal point of the season as they are looking to avoid a second relegation in just three seasons.

The Surrey side – managed by ex-Liverpool centre-back Phil Babb – are one of three teams which could climb down the ladder to the third-season of non-league football, along with Tonbridge and Dorchester Town.

Hayes, Maidenhead and Whitehawk are all on equal points but a win for Babb’s side should realistically be enough to secure another season at Conference South after already leading both teams by at least 8 goals each.

Whites’ opposition have endured a difficult season – having managed only 4 wins in their last 24 games and winning at Kingfield on only six occasions all season.

They currently lie in the relegation zone of the home form table and are the second-joint lowest goalscorers in the league at home.

*BS*HEAD-TO-HEAD RECORD:*BF* Saturday’s fixture will only be the fourth meeting between the two sides since former clubs Hayes FC and Yeading FC merged in 2007.

Whites were *Link2* in the last Kingfield meeting as goals from Ben May (2), Daryl McMahon and a Pele own goal clinched the Nicky Forster’s side a sixth straight win.

Hayes have defeated Dover at Crabble twice in the other two clashes, including a second successive *Link3* in August thanks to Seb Schoburgh’s second-half strike.

*BS*GOING TO THE GAME?*BF* Book yourself a seat on the Supporters Club coach to Hayes & Yeading now! *Link1*.

As a thank you from Hayes to Woking for allowing to share their ground for the past three seasons, this game will be a ‘pay-what-you-want’ for all fans.

*BS*TONBRIDGE v HAVANT:*BF* Havant travel to Longmead needing a win to secure a play-off spot for the first time since 2007 when they lost to Braintree Town in the semi-finals.

The Hawks face a side who suffered relegation to the Ryman Premier League after suffering a crushing 7-1 defeat to Chelmsford City on Easter Monday – prompting manager Tommy Warrilow to resign as a result.

Angels have failed to win in their last six games while Havant have won four of their last 7 in the Skrill South.

In the reverse fixture, Tonbridge were 2-1 winners back in August, and Whites fans will be hoping their Kent rivals will achieve a double over their opponents, although a draw will be enough if Dover beat Hayes.