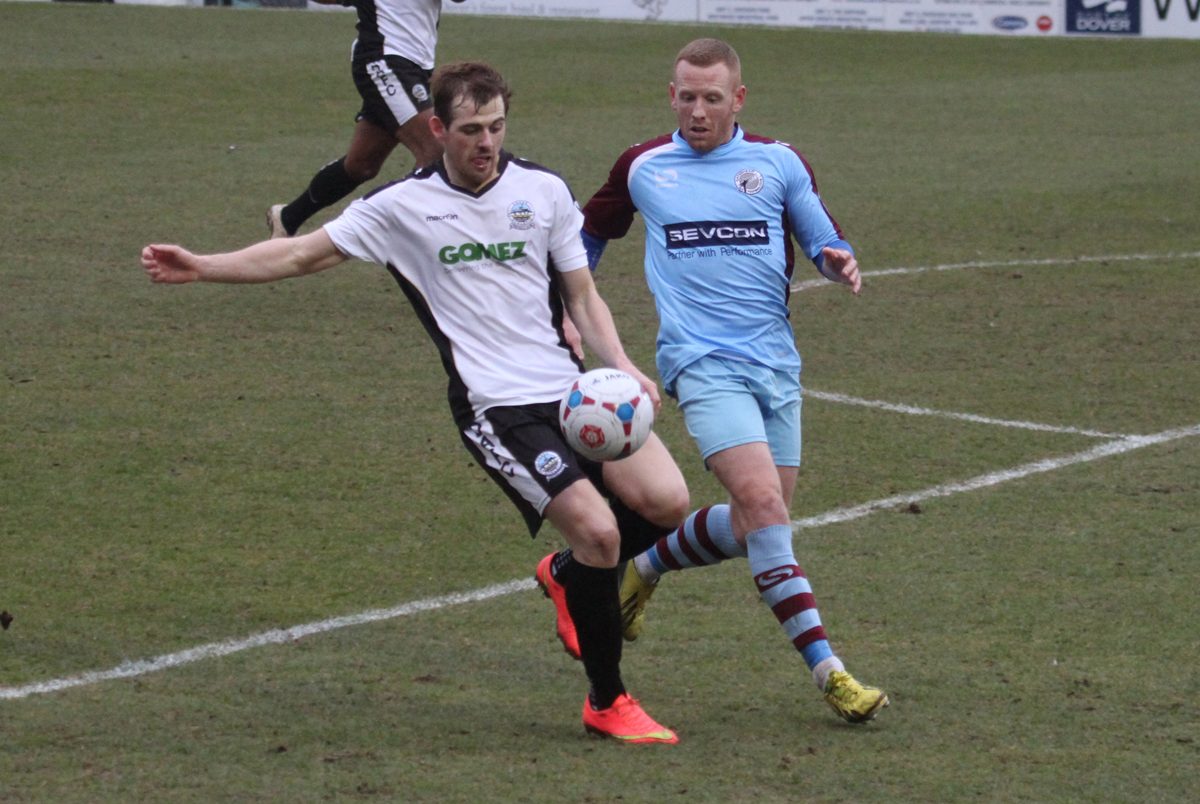 *BS*Dover undertake a 700 mile round trip on Saturday to face Gateshead in the Vanarama National League, knowing that a win could see them climb as high as 4th in the league standings.*BF*

Whites temporarily occupied a playoff spot after Friday night’s victory at home to Woking, which was televised live on BT Sport, but after the weekend’s game dropped down to 8th place – but remain just two points from a top five place.

Chris Kinnear’s side come into the game having won their previous two league fixtures, with the Woking win preceded by a 5-2 thrashing of Eastleigh. Whites have begun to convert their chances into goals, and the seven goals scored in these two games have come courtesy of four different players.

With Whites’ only defeats this season away at Barrow on the opening day, and against Cheltenham Town in September, Dover Athletic are only of only four clubs in the entire division to have lost just two matches – giving them a real sense of optimism as they embark on the long trip up North this weekend.

*BS*TEAM NEWS*BF*
The main concern for Whites is expected to be midfielder Liam Bellamy, who was forced off through injury in the win over Woking. A like-for-like replacement is available in Jack Parkinson, who is now available for selection after serving a three-match suspension, but manager Chris Kinnear may instead opt to bring Tom Murphy – who replaced Bellamy last Friday – back into the starting eleven.

Ricky Modeste is believed to be not quite match-ready, with the midfielder still recovering from his early-season injury, otherwise Whites are expected to keep faith with the players who have served them well in the two impressive recent wins.

Tyrone Sterling missed the match against Woking due to the impending birth of his first child, and we send our congratulations to Tyrone and his family for the new arrival of their daughter last Sunday.

Gateshead have injury concerns of their own, and are expected to be without Matty Pattison (calf), James Curtis (hamstring), Josh Gillies (shoulder) and Danny Johnson (abdominal) for the clash.

*BS*MORE ON OPPOSITION*BF*
A tenth place finish in the league last season looked to have set Gateshead up nicely for a playoff push this time around, however they lost manager Gary Mills – who joined divisional rivals Wrexham – in the close season.

Malcolm Crosby was unveiled as Mills’ replacement, and the 61-year-old is a well-respected figure in the North East. In the 1991/92 season, Crosby guided Sunderland to the FA Cup Final, and he also has caretaker-manager experience at Oxford United, Northampton Town and, as recently as last year, Birmingham City.

Crosby’s appointment has rejuvenated the side, who sit in 2nd place in the Vanarama National League, just two points behind early pace-setters Forest Green Rovers. Five wins from their last eight matches, with their most recent victory being a 1-0 upset away at Forest Green, have given Crosby’s men hope of making a real push to make it into the Football League for the first time in their history.

However, Gateshead have picked up more points away from home than at their International Stadium base – ten versus sixteen – and their home record is only the 14th best in the division. Home defeats have been suffered against Welling United (1-2) and Tranmere Rovers (1-4).

Ryan Bowman is the leading marksman for Gateshead, with seven goals for the season.

*BS*LAST TIME WE MET*BF*
Whites recorded an impressible double over Gateshead in the 2014/15 season. In November, goals from Stefan Payne and Sean Francis saw the side fly back with all three points, and the return leg in March was settled by a solitary Connor Essam strike. Watch highlights of the match here:

*BS*MATCH INFORMATION*BF*
Admission prices are £15 for adults, £10 for concessions, £8 for 16/17 year old students and £3 for under 16’s. Please note, the club reserve the right to request proof of entitlement to reduced admission.

Supporters unable to make the game are also able to follow the action via @DAFCLiveText on Twitter.