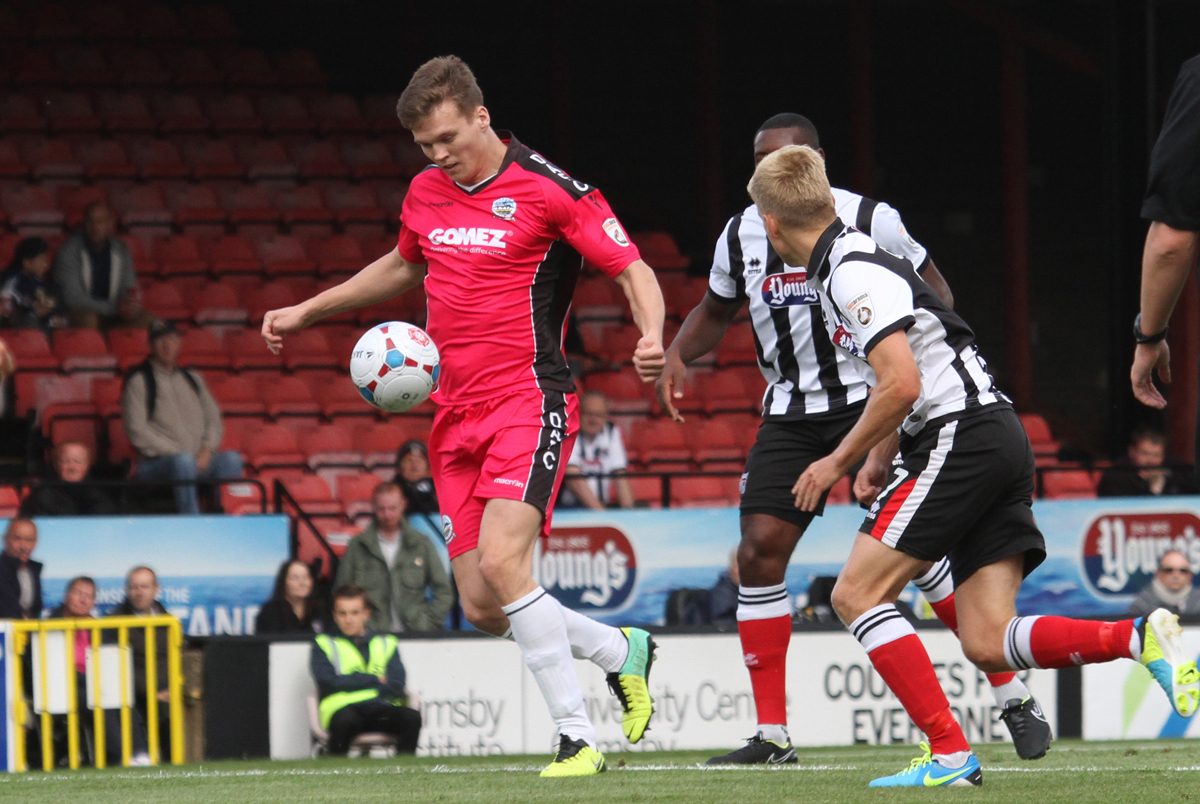 *BS*Dover Athletic travel to Blundell Park on Saturday, looking to cement third place over the Christmas period. Opponents Grimsby are in fifth, and have won their last four matches in the Vanarama National League.*BF*

After an inconsistent November, Dover have rallied and got this month off to a perfect start – two wins from two, eight goals scored and progression sealed in the FA Trophy. Having been knocked out of the FA Cup by Stourbridge, the FA Trophy offered Whites their last opportunity to compete in a knockout competition parallel to the playoff push, and it was a chance seized with both hands.

A strong side travelled to East Sussex to take on Steve King’s side, and the 3-1 victory came courtesy of a goal from Nicky Deverdics, and two from Stefan Payne. Next up in the competition are either Southport or Worcester City at Crabble, with the sides needing a replay after their initial 0-0 draw.

Prior to that, Whites dismantled a poor Aldershot side 5-2 to continue their excellent home form, which would have given confidence ahead of this Saturday when they return to league action, with Grimsby Town the opponents.

Paul Hurst’s Town are fierce opponents – they sit in fifth place, two below Whites, but have two games in hand to try and make up the one point cushion between the sides. At home, they have lost just twice in the Vanarama National League so far this season – to Macclesfield Town (0-2) in August, and to leaders Cheltenham Town (0-1) in October.

They have scored 29 goals in their 12 home matches – the second highest tally in the division – and have scored four or more in front of their home fans on four occasions (4-1 vs Barrow, 4-1 vs Bromley, 4-1 vs Aldershot Town, 7-0 vs FC Halifax).

However, Kinnear’s charges are full of belief in their own abilities, both individually and as a unit – indeed, some of their best performances have come away from home against sides fancied to make a promotion push – notably in the 5-2 defeat of Eastleigh, and the 1-0 win at Prenton Park against Tranmere Rovers.

Grimsby’s form over the last four league matches could not be better – four wins from four, and just two goals shipped.

They have, however, played three matches since their last league outing. They lost 1-0 in an FA Cup replay to League One side Shrewsbury Town after an initial 0-0 draw, and laboured to a 1-1 draw in the FA Trophy against National League North outfit Solihull Moors.

A win for Dover at the weekend could see them finish the day level on points with Forest Green Rovers in second place, whilst a home win for Town will see them climb at least one place, potentially two depending on Eastleigh’s result at home to Kidderminster Harriers.

For Dover, this is likely to be their toughest test over the Christmas period – after Saturday, the side face Welling United twice, with a clash against Bromley sandwiched inbetween the games against The Wings. With three winnable matches forthcoming, it would be fair to say that avoiding defeat at Blundell Park would be more than acceptable – but this is a Dover side who are confident, competent and more than able to spring a surprise.

Whites will be hoping that captain Jamie Grimes has recovered from a slight groin strain which saw him miss the win against Whitehawk, which would likely see him return alongside Richard Orlu and Sean Raggett in central defence.

Grimsby’s top scorer this season is Padraig Amond, who has 14 league goals to his name, and two in the FA Cup. Also in double figures is strike partner Omar Bogle, who has ten in the league thus far. Whites’ top scorer in the league remains Stefan Payne with 11, three ahead of Ricky Miller and Nicky Deverdics.

Last season, Whites travelled to Blundell Park in the second weekend of the season, and picked up their first point of the season in a 1-1 draw. Then, an 86th minute strike by Matt Lock gave Athletic their first league goal of the season, securing a point in the process as he levelled the terms after Jon-Paul Pittman put the Mariners ahead just ten minutes earlier.

Adding to the drama, Whites were awarded a penalty in the dying minutes of stoppage time, gifting them with the opportunity to take all three points back to Kent however Christian Nanetti’s low drive from the spot was well saved by Grimsby keeper James McKeown.

In the return fixture at Crabble, in March, Whites lost 1-0 courtesy of a sixth minute strike from Lenell John-Lewis, who is now on the books of League Two side Newport County.

Visiting supporters will be housed in the Osmond Stand Corner. The away supporters section of the Osmond Stand has a seating capacity of 586. Entry to this stand is in Harrington Street. All concessions will need to be purchased from the Ticket Office.