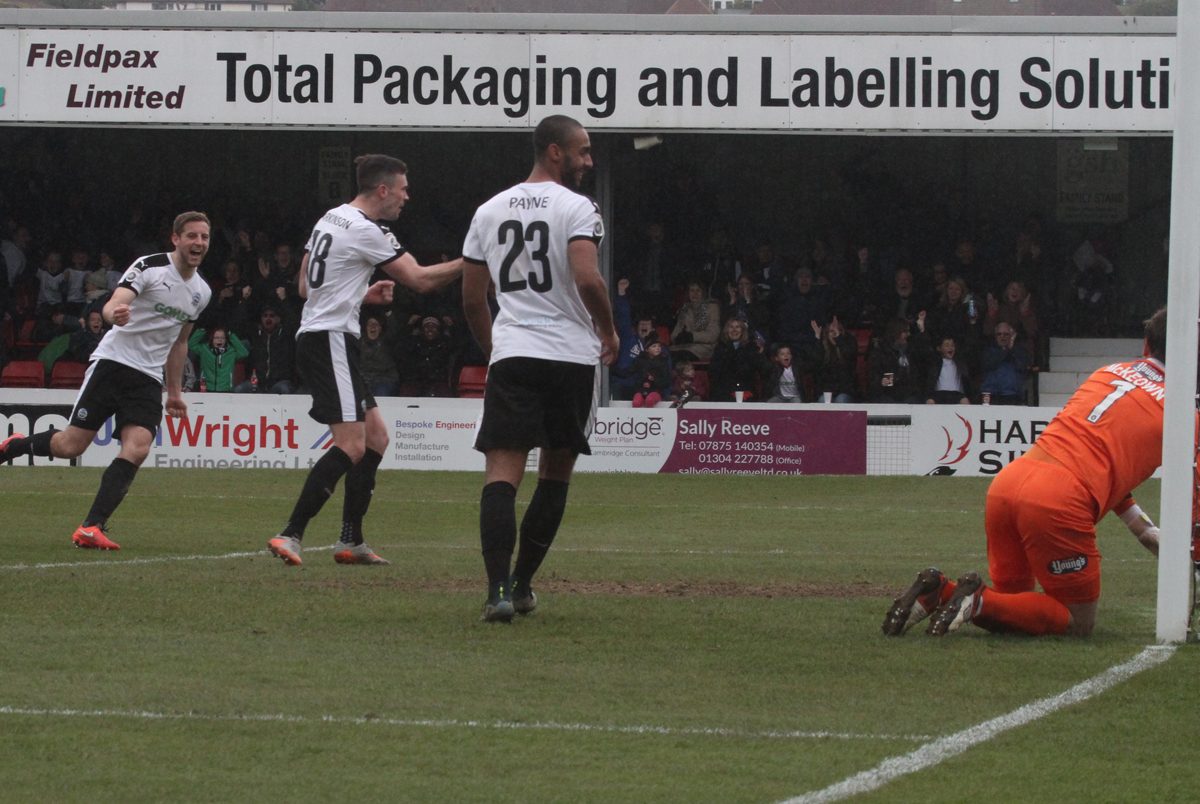 *BS*HEADLINES*BF*
With just two matches left to play in the Vanarama National League this season, Dover Athletic Football Club are on the brink of history. Whites have a four-point cushion ahead of Eastleigh, who occupy sixth place, and a far superior goal difference over the sides sitting in fifth and sixth.

Mathematically, Whites still need three points to seal a playoff spot, however – owing to the better goal difference – two points would, 99% of the time, also be enough.

To save any last day tension, Whites will be looking to get the job done this weekend when they travel to Kidderminster Harriers. Win, and they can go into the last game of the season – at home to Forest Green Rovers – knowing that their playoff spot is secure.

Of course, depending on both Braintree and Eastleigh get on this weekend – away at Wrexham, and at home to Tranmere Rovers respectively – Whites could even lose this Saturday, and still secure their playoff spot.. the full list of permutations and possibilities is here: *Link1*

Saturday’s opponents, Kidderminster Harriers, had their relegation confirmed last weekend when they failed to beat Barrow. Subsequently, they will drop out of the top flight of non-league football for the first time since the 1982/83 season – and will be missed. Harriers are a name synonymous with football at this level, but have under-performed all season long. They have sat in the bottom four of the division ever since August.

However, their recent form has actually shown signs of improvement – and Whites will face a wounded animal this weekend, perhaps a side who can now play without pressure. They appointed a new manager on Thursday – former Coventry City, Derby County, Stoke City and Watford midfielder John Eustace. He will take charge in the summer, however players will be looking to impress in their final two games of the season.

Harriers’ only real aim for the rest of the season is to avoid finishing in bottom spot. They are one place, and one point, ahead of Welling United – so will be keen to pick up points between now and the end of the month.

Still proudly bearing the ‘Harriers’ moniker 130 years after formation, Kidderminster Harriers existed as an athletics club in its early years, moving into rugby in 1880 before venturing into football; starting to play the game as we know it now in 1886 as association football came to the town for the first time.

The Birmingham and District League was formed in 1889; Kidderminster Olympic pipping Harriers to the title before the two clubs merged in 1890 under the Harriers banner. Harriers continued in the Birmingham League until 1939, winning the Championship in consecutive seasons (1938 and 1939), clinching a league and cup double in the latter campaign.

The club’s move to the Southern League for 1939-40 proved short-lived as the Second World War intervened after only three games. Immediately after the war Harriers played in the Birmingham League and Birmingham Combination before re-joining The Southern League in 1948-49. That Season the record attendance was registered for a game at Aggborough, when 9,155 spectators saw Harriers lose 0-3 to local rivals Hereford United in an FA Cup tie.

In 1951-52 the revolutionary use of floodlights by the club gave Harriers the distinction of staging the first floodlit games in the history of the FA Cup at Aggborough. Harriers’ next championship was the Birmingham Senior Cup in 1964, and a further 23 trophies – including four League Championships – were won before Harriers re-joined the Southern League in 1972. Promotion to the Alliance Premier League (Football Conference) was clinched at the end of 1982-83.

The club’s elevation to the Alliance Premier League (Conference) ushered in a quarter of a century of unprecedented success for the Harriers that would see them win every major honour in the Non-League game and ultimately become the 21st Century’s first newcomers to the Football League.

Away from league action, 1987 saw Harriers qualify for a Final at Wembley Stadium for the first time. The fixture was the FA Trophy against Burton Albion. After a 0-0 draw, Kidderminster went on to win the replay 2-1 (after extra time) at the Hawthorns. Harriers have since graced the Wembley turf on three further, heart-breaking occasions; losing to Wycombe (1991), Woking (1995) and Stevenage (2007) in finals, the latter in front of a record crowd of 53,000 at the newly-rebuilt national arena.

In the FA Cup, Harriers remain perennial headline makers. The team’s most memorable cup run was perhaps that of the 1993/94 season when giants aplenty came head to head with Worcestershire’s premier side. Chesham United, Kettering and Woking were all downed as Harriers entered the Third Round draw – paired with Birmingham City. The reds secured one of the most memorable victories in its history at St Andrew’s, winning 2-1 in front of almost 20,000 fans thanks to Jon Purdie’s clincher. More joy followed in the Fourth Round and Preston North End were duly dispatched at a packed Aggborough, the mazy run only coming to an end at the hands of top-flight West Ham United, who sneaked an agonising 1-0 victory on the day.

Further runs since have kept Harriers up there as a true giant killers – they gave a true fright to then Premier League neighbours Wolves in 2003 before being knocked out in a Molineux replay, while Darren Ferguson’s Peterborough were beaten on a memorable night at London Road ten years later, setting up a plum tie at Premier League Sunderland, where Harriers were beaten by a single goal in front of more than 4,000 travelling fans.

The turn of the millennium signalled undoubtedly one of the most memorable periods in the club’s illustrious history. Under the stewardship of former Liverpool legend Jan Molby, Harriers clinched promotion to the Football League for the first time in 2000, where they enjoyed five seasons.

Harriers returned to a very different non-league scene in 2005, and have continued to relish their annual underdogs tally, under the management of the likes of former captain, Mark Yates, and one-time Macclesfield Town striker, Steve Burr. Led by the latter and his assistant, Gary Whild, the team came within a single goal of a return to the Football League in 2013, losing out to Mansfield as the title race went down to the final day; Burr’s men beaten in the play-offs.

Financial instability has plagued the club over much of the last five years but, under a new Board of Directors including Chairman, Rod Brown, a true revitalisation of the club on and off the field has ushered in a new era of care and caution throughout.

*BS*RECENT FORM*BF*
Coming into the game, Whites have a record of three wins, two draws and one defeat in their last six Vanarama National League matches. Wins were picked up against FC Halifax Town (1-0), Altrincham (2-1) and Wrexham (1-0), with draws against Macclesfield Town (0-0) and Grimsby Town (1-1) and a defeat to Boreham Wood (0-3).

Kidderminster’s record over the same number of matches shows two wins, three draws and one defeat. The victories came against Welling United (2-1) and FC Halifax Town (1-0), with draws against Woking (1-1), Altrincham (1-1) and Barrow (0-0), and a defeat suffered against Tranmere Rovers (0-2).

*BS*HOME AND AWAY*BF*
Away from home this season, Dover have the sixth best record in the division, with ten wins and five draws accumulated from 22 matches on their travels.

At home this season, Kidderminster have the 22nd best record in the division. They have won five and drawn six of their 22 matches at Aggborough.

Whites travelled to the Aggborough in search of a much needed win which could potentially seal their safety in the Vanarama Conference for a second season, and take home the glory they did as Tom Murphy bagged a superb brace to deliver all three points back to Kent.

Murphy’s goals either side of half time were enough to complete a solid team performance against their out of form hosts and clock up 50 points for the season so far.

Kinnear and team will no doubt be pleased to return to winning ways, all the while keeping a clean sheet against a poor Kidderminster side who did little to trouble Whites’ defence too much.*IF*

*BS*TEAM NEWS*BF*
Richard Orlu will serve the second leg of his three-match suspension, picked up following his dismissal against Macclesfield Town earlier in the month, so loanee Connor Essam can be expected to continue at centre-back in his absence. Whites are likely to name an unchanged line-up from the side that dominated Grimsby Town last weekend, with Sean Raggett and Ricky Modeste – who both came off after picking up knocks in that game – hoping to be fit.

*BS*TOP SCORERS*BF*
Whites’ top scorer in the league is Ricky Miller with nineteen, one goal ahead of Stefan Payne and five more than Nicky Deverdics.

Kidderminster’s top scorer in the league this season is Ben Whitfield, who has found the back of the net on six occasions thus far. The 19-year-old midfielder is on loan from Premier League side Bournemouth until the end of the season.

*BS*COVERAGE*BF*
The best place to see Saturday’s big game is at Aggborough, but for supporters unable to make the game, our Live Text service on Twitter – @DAFCLiveText – will be running as usual.