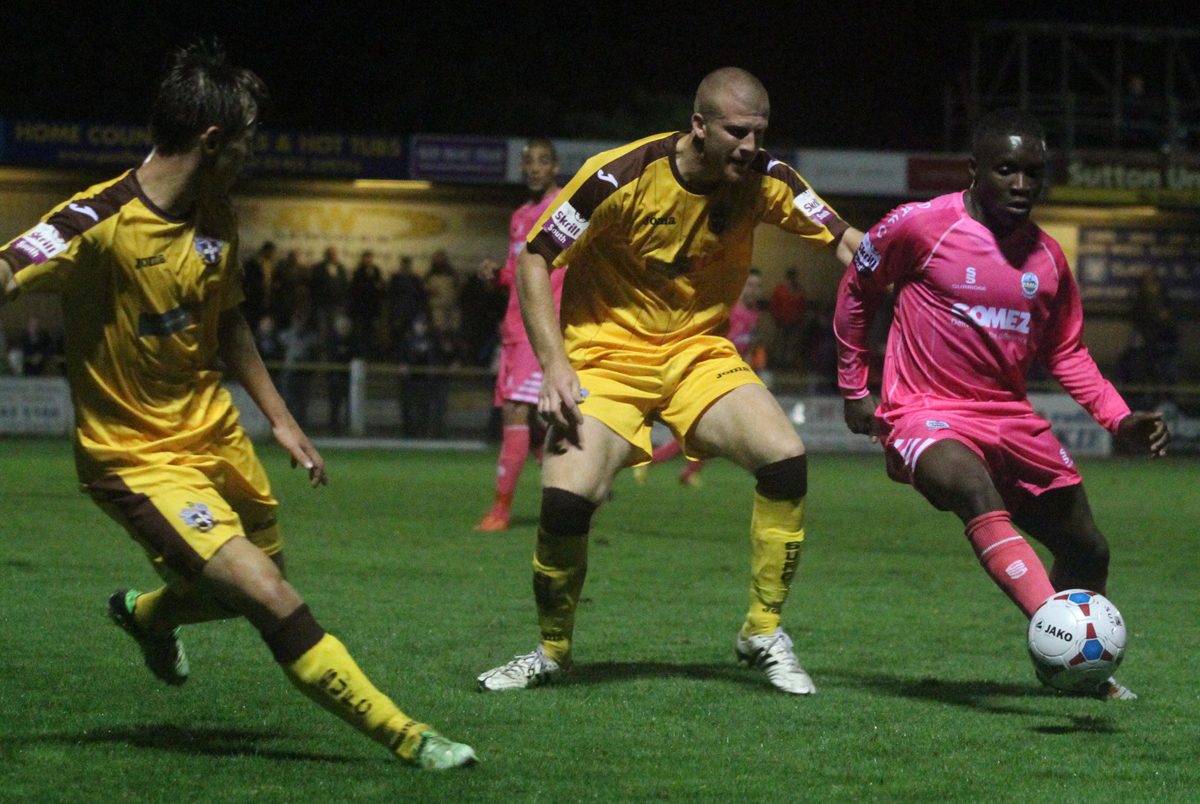 *BS*Dover Athletic travel to Surrey to face Sutton United in the second leg of the Skrill South play-off semi-final after both teams *Link1* in the first leg at Crabble on Wednesday evening.*BF*

The winners of this tie are likely to face Ebbsfleet United in next Saturday’s final after the Fleet comprehensively beat 10-man Bromley 4-0 in the other play-off semi-final tie – with former Whites Ben May, Billy Bricknell and Daryl McMahon all finding the net.

Many Whites fans will be dreaming of an Ebbsfleet-Dover final but first, Whites must overcome a tough challenge at Sutton in now what is arguably billed as Dover’s biggest game of the season.

*Lpic1**BS*TEAM NEWS:*BF*
Despite Moses Ademola suffering a late injury scare during Whites’ final preparations before kick-off, Wednesday’s goalscorer was fine to continue and is expected to maintain his place in the starting line-up as manager Chris Kinnear is faced with no new injury worries.

Barry Cogan will serve the second game of his four-match suspension while Saturday could potentially be Gillingham-loanee Callum Davies’ final game for the club.

The centre-back, who has spent his time in midfield at Dover for the past month, is cup-tied for Monday’s Kent Senior Cup Final and will be hoping his Dover spell will not end at Gander Green Lane, at least on loan anyway.

*BS*OPPOSITION FORM:*BF*
Sutton’s draw at Crabble on Wednesday evening extended their remarkable league form – having lost only once in their last 22 Skrill South league matches including the play-offs.

The Surrey side finished with the second-best home form in the Skrill South behind champions Eastleigh as they won an impressive 15 games out of their 21 matches at Gander Green Lane.

One of their victories included a *Link2* over Whites back in September, with Dean McDonald – who appeared as a trialist for Dover in pre-season – scoring the only goal of the game before Ademola was controversially sent off in the second half.

The U’s also scored 44 goals at Gander Green lane in the regular Skrill South – giving them a ratio of just over 2 goals per game and making them the second-best highest goalscorers at home in the league behind Bromley.

*Lpic2**BS*HEAD-TO-HEAD RECORD AT GANDER GREEN LANE:*BF*
Dover have a poor record at Sutton’s ground – having failed to win there in their last five matches in all competitions and scoring only twice in the process.

Whites’ last victory at Gander Green Lane stretches back to 14 years ago when Gwynne Berry’s second-half own goal gifted Dover a 1-0 win in the Conference in May 2000 – clinching their highest ever position in their history in the same season the U’s were relegated from the division.

Both sides go head-to-head once more with both looking to clinch promotion back to the league they have not participated in since the early 2000’s – the Conference Premier, which is the highest level of non-league football.

*BS*MORE INFORMATION ON THE GAME:*BF*
The Supporters club will be running two coaches to the ground – *Link3* to book your place now to avoid the disappointment of missing out.

The car park at Sutton’s ground will be free of use, however the club expect it to be filled early on in the day so public transport is recommended – the ground is next to West Sutton train station and it’s on the 413 bus route.

The turnstiles open at 13:30 while the club bar opens at midday – where away fans are welcome to enjoy pre-match drinks, with four different real ales on handpump.

All supporters are reminded that drums are *BS*NOT*BF* allowed to be brought into the ground, while bringing in items such as flares, fireworks or smokebombs are considered to be a criminal offence which could lead up to three months in jail.

We all hope you enjoy your day at Gander Green Lane and we secure a result to book our place in the Skrill South play-off final!

If, however, you cannot make the game, then live text commentary on Twitter will be provided by Kieran Dodd and Matt Clements again – just follow @DAFCLiveText from 14:00.