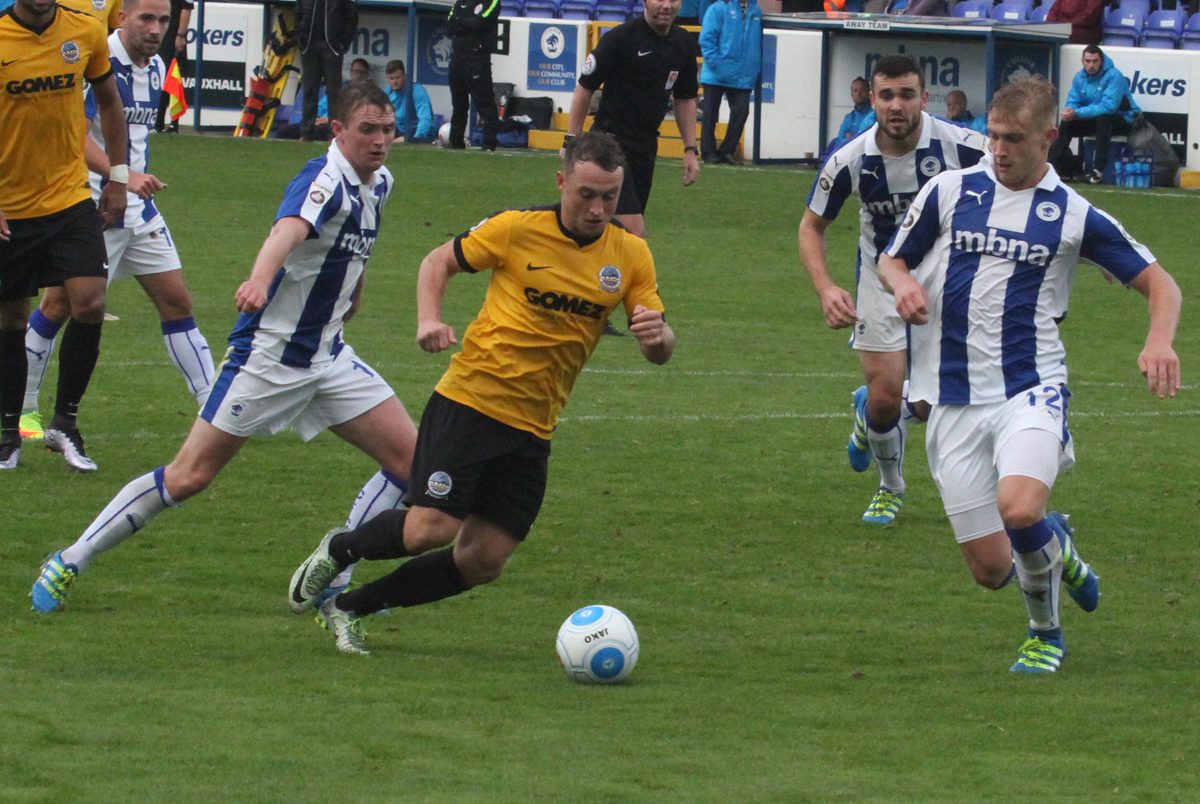 Dover will be out to end a run of two consecutive National League defeats when they host Chester FC at Crabble on Saturday.

Losses at Macclesfield Town and Lincoln City have seen boss Chris Kinnear’s side drop to sixth on the ladder on goal difference behind Barrow.

Whites will also want to secure a first win at home since the 3-1 triumph against Woking on November 22.

But the boss is not letting the formbook get to him.

He said: “It is always disappointing to lose, but we are not going to overreact to recent defeats.

“With second to fifth all facing each other, Saturday will provide a great opportunity for us to make up some ground and hopefully we can end the day in the play-off positions again.”

Something captain Jamie Grimes wants to erase from the memory bank.

He said: “We owe Chester after probably our worst performance of the season at their place in October.

“It was possibly a false score in the end after having played 60 minutes with goalkeeper Steve Arnold hobbling around with a fractured foot.

“But that doesn’t make that result any easier to bear – that hurt, so hopefully we can put it right on Saturday.”

The Blues came from behind the draw 1-1 against visiting Wrexham in the cross-border derby last Saturday.

Former Chester man John Rooney put Wrexham ahead in the second half after he scored from close range.

James Alabi levelled for the hosts from the penalty spot after he had been brought down by James Jennings.

Chester finished the game with 10 men after a second yellow card for captain Luke George.

Whites’ top scorer in the National League this season is Ricky Miller with 25.

Miller’s strike partners Ross Lafayette and Moses Emmanuel are also both in double figures with Emmanuel on 11 and Lafayette with 10 to his name.

Assistant boss Jake Leberl said on Friday that there are no injury concerns although Ricky Modeste’s involvement remains to be seen as he awaits the birth of his first child.

Tickets can still be purchased on the day and this match is NOT segregated.

The game starts at 3pm but if you are unable to make the trip up the hill to Crabble, we will have live updates on Twitter – @DAFCLiveText – follow us and get all the news as it happens!

Coach leaves Crabble at 7.30am and the cost is as follows:

Coach leaves Crabble at 4.30pm and the cost is as follows:

Please call or text Andy Fisher on 0793 4300335 to book your seat or see him in the Centre Spot before or after today’s game.

You are now required to pay for your seat in advance in cash or by cheque or via bank transfer.