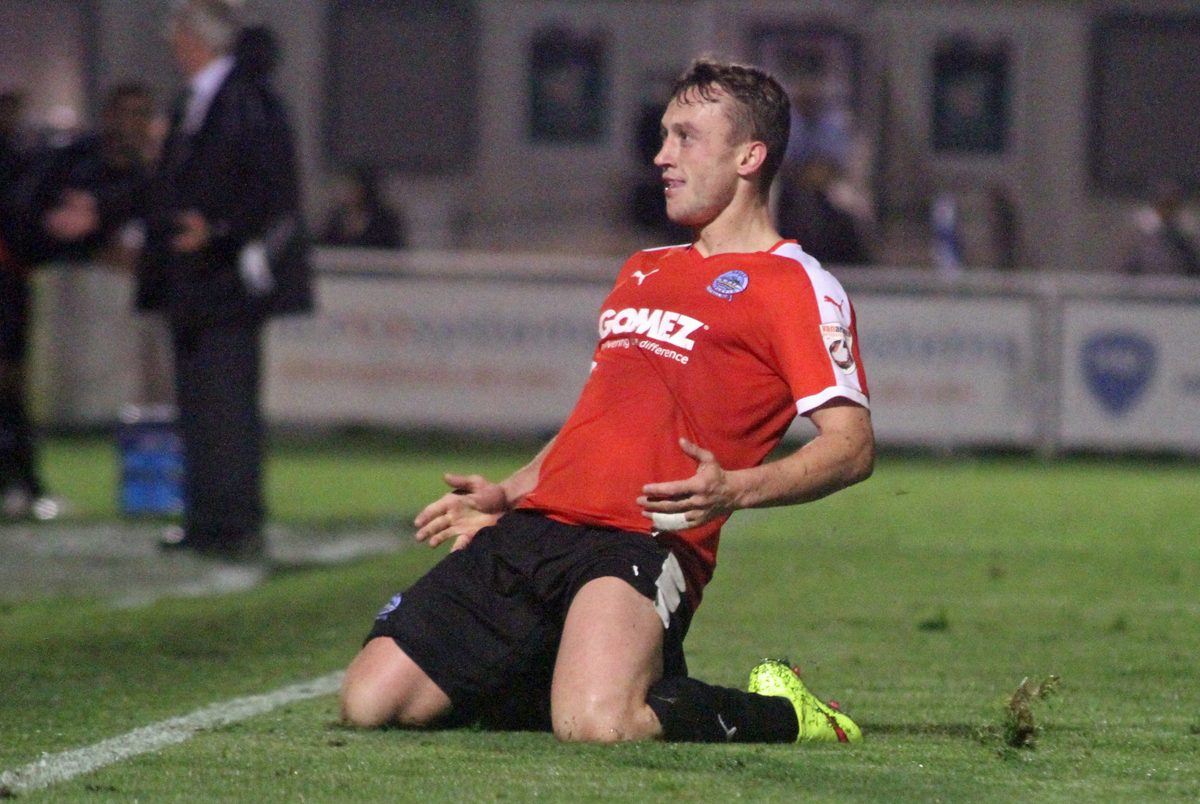 *BS*Dover Athletic return to action in the Vanarama National League on Tuesday, with Eastleigh the visitors to Crabble. Whites will be looking to bounce back from defeat in the Emirates FA Cup at the weekend, and continue their record of being the only side undefeated in the league at home.*BF*

Chris Kinnear’s men were on the wrong end of a giant-killing on Saturday afternoon at Crabble, with Evo-Stick Northern Premier side Stourbridge picking up a 2-1 victory.

It was a match in which Whites failed to really get going in, and manager Kinnear described the defeat as both ‘disappointing’ and ‘a waste’. However, his mood will undoubtedly be buoyed if his side can pick up all three points against Eastleigh on Tuesday night, a result which would further cement his side’s now-realistic playoff aspirations.

It was not even the outcome of Saturday’s tie which frustrated many, more the performance – having been treated to some exceptional football over the past couple of months, not least in their previous match – a memorable 1-0 victory away at Tranmere Rovers – Dover just could not get going against a well organised Stourbridge side.

If any consolation is needed, it quickly comes from a look at the current Vanarama National League table. Sitting in third place, just two points away from league leaders Forest Green Rovers, Whites have developed a five point cushion ahead Wrexham in sixth place.

Recent form in the Vanarama National League could not be much better, with the side having picked up 21 points from a possible 24 in a run stretching back almost two months.

Whites have gone 30 games since losing consecutive matches in the league, and indeed when they have games in other competitions this season – namely against Barrow, Cheltenham Town, Bromley and Braintree Town – the side have won three of the four following games, drawing the other.

After the disappointment of Saturday, the match against Eastleigh – who are currently in 7th – offers an immediate opportunity for Dover to continue their superb start to the season.

Other statistics make good reading for Whites fans. Top scorer Stefan Payne has recorded the most shots on target in the division – his 34 efforts have yielded 9 league goals – and midfielder Nicky Deverdics is top of the assists chart, with 8. Added to his six goals, it’s been a great start to the season for Devs, who has also scored the most penalties in the league, having found the net on four occasions from the spot. Defensively, Mitch Walker has made the most saves in the division – 94 so far.

A win for Dover could – depending on results for Forest Green and Cheltenham Town – see them top of the league by the late hours of Tuesday night. Three points for the visitors could see them rise to 4th.

Whites have the best home record in the division, with their 7 wins from 9 games yielding well over 2 points per game. On their travels, Eastleigh have had a decent run, taking 15 points from 9 trips. Away from home in the league, they have beaten Southport (4-0), Aldershot Town (2-1), Wrexham (3-2) and Tranmere Rovers (2-1). In addition, they beat League One side Crewe Alexandra 1-0 away from home in the Emirates FA Cup on Saturday.

Eastleigh’s recent form is second only to Dover’s, meaning that Tuesday’s clash at Crabble promises to be a cracker.

Whites will be forced to make at least one change, with Mitch Walker’s red card against Stourbridge meaning the goalkeeper is suspended – paving the way for Andy Rafferty to try and make the position his own once again. Jaydon Gibbs (back) and Liam Bellamy (knee) remain unavailable, whilst Nicky Deverdics is a concern, having been taken off with a dead leg on Saturday.

Top scorer for Eastleigh this season is James Constable, who has six goals, with Ross Lafayette and Yemi Odubade both on four.

Whites have had the beating of Eastleigh in recent times, with the last three meetings ending in victory for Dover. That run began with the 2-1 win last August at Crabble, and the double was completed when a Sean Raggett header was enough to win at the Silverlake towards the end of last season. Then, just under two months ago, Dover thumped Eastleigh 5-2 away from home – which turned out to be Richard Hill’s last match in charge.

Highlights from the home win last season can be viewed here: