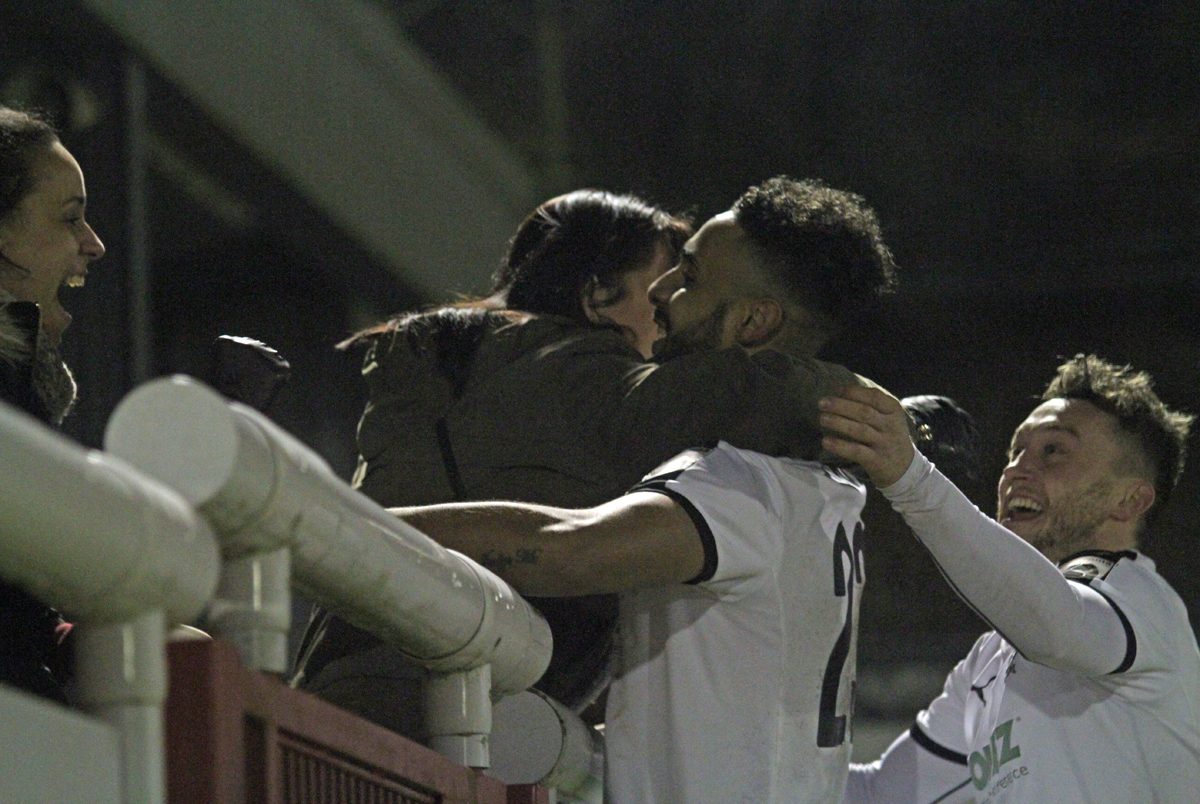 *BS*HEADLINES*BF*
Whites’ Easter weekend saw their 5-0 thumping of Torquay United followed up with an uncharacteristic performance, losing 3-0 at Boreham Wood on Easter Monday. Chris Kinnear’s men will be determined to get back to winning ways this weekend, with FC Halifax Town the visitors to Crabble – there are just seven matches remaining for Whites to navigate if they want to be involved in the playoffs for promotion to the Football League, and every point is crucial.

Another thirteen points from their remaining fixtures should be enough to see the side finish in the top five, but with Grimsby Town and Forest Green Rovers still yet to visit Crabble – and a couple of tricky away ties to get through – this Saturday’s match is of prime importance.

It is nearly seven months since Whites failed to score in successive matches, and the side’s welcome return to Crabble will give supporters confidence that all three points can be picked up, against a side desperately battling against relegation.

Halifax also lost by three goals on Monday – going down 4-1 at Barrow – a result which saw them drop to 20th in the Vanarama National League table, one place and one point outside of the drop zone. After Saturday’s game, Whites are on the road for three in a row – away at Altrincham (21st), Wrexham (8th) and Macclesfield Town (10th).

Three points for Dover could see them rise one place to fourth, depending on Tranmere’s result at home to Welling, and a win would also see them continue to shrug off the teams just outside of the top five, hoping for a Dover slip-up. A victory for Halifax could see them climb two places, to 18th.

The present club was formed in 2008, replacing Halifax Town F.C. which had gone out of business with around £2 million in debts. The original club was formed in 1911 and played in the Yorkshire Combination and then the Midland League becoming a founder member of the Football League Third Division (North) in 1921.

After several poor seasons, it all came right in 1997-98 and Halifax were promoted back to the Football League as Conference champions, but in 2002 they were again relegated to the Conference. Four years later Halifax lost the play-off final to Hereford in extra time, but their money problems meant that the club was wound up in May 2008. They twice reached the Fifth Round of the F.A.Cup, in 1932-33 and 1952-53, and beat Manchester United in the Watney Cup – a pre-season tournament – in 1971.

Just before the start of last season Lee Gregory left for Millwall for a fee of £250,000. Manager Aspin brought in Macclesfield top scorer Scott Boden and young striker Richard Peniket from Tamworth to try and fill the void left by Gregory.

Some impressive pre-season results and five consecutive wins at the start of the season increased fans’ expectations even further as Halifax sat clear at the top of the league. Inevitably they dropped off slightly but still picked up some credible results in September as they ended the month in second place.

A poor run in October and November with only one win in eight games saw Halifax drop as low as 11th place. However within this poor league run was an FA Cup run which saw Halifax get drawn against local rivals Bradford City. Halifax lost the match 2–1 in front of a new club record 8,042 fans at The Shay which marked the start of Bradford’s infamous cup run in which Bradford reached the Quarter-finals.

Halifax ended the season with a couple of impressive results, namely draws against league champions and runners-up Barnet and Bristol Rovers respectively. However these two draws were part of nine that Halifax drew in their final 15 games which saw them drop away from the play-offs, and they only won one of those 15. They did, however, finish as the third highest part-time side in the league.

*BS*RECENT FORM*BF*
Coming into the game, Whites have a record of four wins, one draw and one defeat in their last six Vanarama National League matches. Wins were picked up against Welling United (2-1), Lincoln City (4-1), Guiseley (1-0) and Torquay United (5-0), with a draw against Tranmere Rovers (0-0) and the defeat against Boreham Wood (0-3).

Halifax’s record over the same number of matches shows two wins, one draw and three defeats. The victories came against Southport (1-0) and Altrincham (1-0), with a draw against Torquay United (0-0) and defeats suffered against Braintree Town (0-2), Bromley (0-1) and Barrow (1-4).

*BS*HOME AND AWAY*BF*
At home this season, Dover have the sixth best record in the division. They have won twelve and drawn four of their twenty matches at Crabble.

Away from home this season, Dover have the ninenteenth best record in the division, with five wins and two draws accumulated from nineteen matches on their travels.

Scott McManus scored the only goal of the game when his left footed effort from distance bounced in off the inside of the post shortly after half-time.

Manager Chris Kinnear’s first starting eleven of the new league season saw him keep faith in the players that got the Whites promoted last season, with Tyrone Sterling being the only player to come into the side that was not a part of last season’s promotion winning campaign.

Halifax opened the scoring right after half-time when Town left-back McManus was afforded too much time and space in Dover’s half and this time the visitors got the right bounce off the woodwork as his strike bounced in off the post.

Dover then squandered their best chance of the second half as more good work on the left hand side from Wynter saw him pick out Barry Cogan on the edge of the box, but fired his shot over the bar.

Dover can take a lot of heart from their performance in the game going forward, knowing that they were not outplayed or over matched against a side that was knocked out in the playoffs last time around.*IF*

*BS*TEAM NEWS*BF*
Ricky Modeste picked up a hamstring injury in Monday’s defeat at Boreham Wood so faces a fight to to be fit for this match, whilst Aswad Thomas, Andy Rafferty and Tyrone Sterling continue to be unavailable.

Halifax’s top scorer in the league this season is Jordan Burrow, who has the found the back of the net thirteen times.