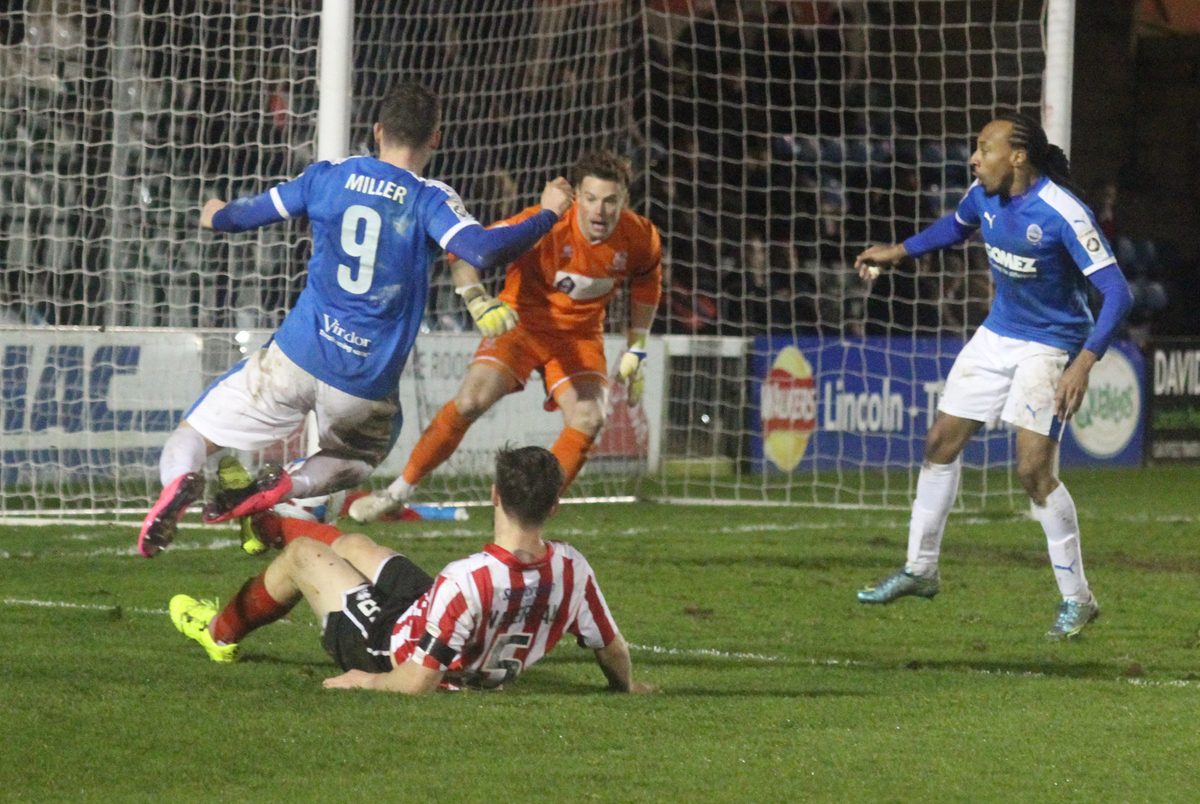 *BS*HEADLINES*BF*
A good display at Crabble on Saturday saw Whites pick up a point in a 0-0 draw against Tranmere Rovers – a point that, given the number of games each side has remaining, was worth more to Dover than their newly-relegated opponents.

It was the hosts who controlled the play and came closest to scoring, with Sean Raggett’s header hitting the crossbar late in the second half, and Mitch Walker kept comparatively quiet in the home goal.

That draw saw Whites drop a side to seventh, but actually end up closer to the playoffs than at the start of the day – it’s now a gap of two points, compared to three prior to kick-off.

Tuesday evening sees Lincoln City come to Crabble to try and pick up three points for their own playoff charge. A good run of form has seen The Imps win four of their last six matches in the Vanarama National League, but they will need to continue this momentum to have any chance of securing a top-five finish come the end of April. The sides met at Sincil Bank in January, with a brace from Ricky Miller and a Nicky Deverdics penalty earning an impressive 3-2 victory.

A win for Dover could see them finish the evening in 4th place, whilst three points for the visitors could see them edge ever close to the playoff spots.

With games rapidly running out, it’s time for both sides to show their true colours..

Lincoln City have played in the Conference Premier since the season 2011–12. Following relegation, Tilson released all but three members of the squad, telling them they had no future at Sincil Bank. By early October, Lincoln were one point above relegation zone and the management were coming under-fire after a run of one win in four; Tilson was sacked as manager on the 10 October 2011 following a 4–0 defeat at Tamworth. Following the duo’s sacking, Grant Brown was put in temporary charge.

Brown remained in charge for four games, winning the first but none of the subsequent three, before former Mansfield Town manager David Holdsworth was confirmed as manager. Holdsworth managed the Imps to safety but only by 8 points; furthermore, Lincoln lost to Isthmian League outfit Carshalton Athletic in the FA Trophy and suffered an earliest FA Cup exit since 1924–25.

Lincoln were one game away from facing Liverpool in the FA Cup third round the following season, but were denied by a second round replay defeat to Mansfield Town. On 17 February 2013, David Holdsworth left the club by mutual consent following twelve games without a win. On 27 February 2013, Gary Simpson, a former assistant of Keith Alexander during his time at the club, was appointed manager until the end of the season. Safety was secured on the final day with a 5-1 away win against Hyde.

After a good start to the 2013-14 season, Lincoln went on a run of just two wins in seventeen games saw the Imps embroiled in relegation trouble once more. From the start of February to the end of the season, Lincoln lost just three games, and finished 14th in the league, their best placing since relegation. Gary Simpson was placed on gardening leave on 3 November 2014. Assistant manager Chris Moyses was placed in temporary charge and then appointed permanently on 8 December 2014. Lincoln finished 15th that season.

*BS*RECENT FORM*BF*
Coming into the game, Whites have a record of three wins, one draw and two defeats in their last six Vanarama National League matches. Wins were picked up against Gateshead (4-0), Woking (1-0) and Welling United (2-1), with Saturday’s draw against Tranmere Rovers (0-0) and defeats suffered against Cheltenham Town (1-2) and Southport (1-2).

Lincoln’s record over the same number of matches shows four wins and two draws. Their victories came against Guiseley (1-0), Eastleigh (3-0), Southport (3-1) and Aldershot Town (2-0), with draws against Altrincham (3-3) and Macclesfield Town (1-1).

*BS*HOME AND AWAY*BF*
At home, Dover have the fifth best record in the division, with ten wins and four draws in eighteen Vanarama National League matches at Crabble.

Away from home this season, Lincoln have the eleventh best record in the division, with six wins and five draws accumulated from eighteen matches on their travels.

The hosts had taken the lead in the first half, but Miller’s first shortly before the interval sent the sides into the break on even terms.

City took the lead shortly after the break, before a penalty from Nicky Deverdics and an excellent solo effort from Miller sealed an excellent comeback for Chris Kinnear’s men.

Lincoln threw everything at Whites in the closing stages, but a resolute Dover defence saw little threat created by an increasingly desperate Imps attack. In fact, it was Miller who had the best chance of the remaining minutes, with Miller once again the protagonist – only a good reaction stop from Farman saw his hat-trick denied.

Full credit goes to Dover for their character and continued determination, with their never-say-die attitude yielding three points once again.*IF*

*BS*TEAM NEWS*BF*
Whites were boosted by the return of Jamie Grimes to action on Saturday, with the defender having now recovered from injury. Tyrone Sterling, Liam Bellamy and Aswad Thomas remain doubtful for Whites, meaning that Craig Braham-Barrett – signed last week – is likely to be given the nod at left wing-back, after an impressive debut against Tranmere Rovers at the weekend.

Dover are likely to name an unchanged starting line-up for Tuesday’s game, with Jack Parkinson likely to continue at centre-back following his man-of-the-match display on Saturday.

*BS*TOP SCORERS*BF*
Lincoln’s top scorer in the league this season is Matt Rhead, who has the found the back of the net nineteen times.

Whites’ top scorer in the league is Ricky Miller with fifteen goals, two ahead of Stefan Payne and three more than Nicky Deverdics.

*BS*COVERAGE*BF*
The best place to see Tuesday’s big game is at Crabble, but for supporters unable to make the game, our Live Text service on Twitter – @DAFCLiveText – will be running as usual.

*BS*OTHER MATCHDAY ACTIVITIES*BF*
Between 6pm and 7pm tomorrow, Whites fans will once again be able to take advantage of our free beer offer. As previous, those wishing to claim their drinks should make their way to the Centre Spot where they can claim one pint of Fosters per customer, per trip to the bar. As this match is segregated, this is only available to fans entering via the home turnstiles.

Please note, we have the right to refuse anybody, for any reason, at the discretion of Centre Spot staff. We encourage supporters to drink responsibly.