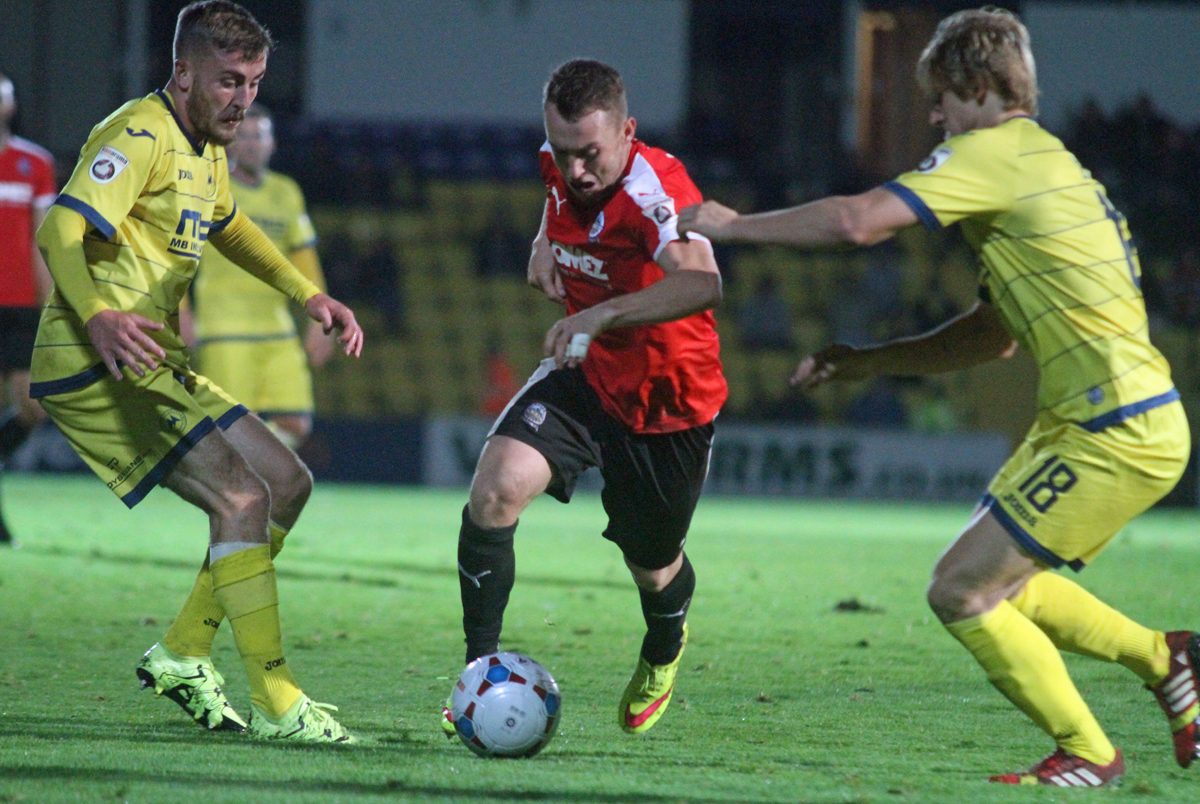 *BS*HEADLINES*BF*
With the number of matches remaining for both sides in their respective 2015/16 Vanarama National League campaigns now down to single figures, it’s fast approaching make-or-break time. Whites picked up a 1-0 win at Guiseley last weekend – Stefan Payne continuing his hot streak to net his 16th league goal of the season – but the third clean sheet in five games will have been more than welcome also.

Torquay also won by one goal to nil at the weekend, a result that saw them move out of the relegation zone for the first time in six months. Their recent league form has been remarkable, with five wins and three draws from their last eight games, and just three goals conceded in the process.

Whites announced the loan signing of Connor Essam in midweek, with the former club captain returning to Crabble having left at the end of last season to sign for League Two side Leyton Orient.

Friday’s Vanarama National League matches saw Whites drop to sixth in the table, however a point would see the side end the day in fifth – and three points would put them fourth, potentially cutting the gap on third-placed Grimsby Town to just one point. Three points for the visitors could see them rise another place to 18th, and potentially put them four points clear of the bottom four.

Torquay started the 2014–15 season in the Conference Premier poorly losing to Gateshead 1–3 with Ryan Bowman missing a penalty. After that match Torquay had a brilliant unbeaten run, first of all beating Welling United 3–0 then drawing 0–0 with Southport and then with Dartford. Yet another draw came when they drew with Aldershot Town 1–1 at home. That was their last draw for a while as they went on a 6-game unbeaten run.

Starting with a 1–3 away win at Lincoln City then playing at home beating Nuneaton Town 4–0, they were 3–0 up after 30 minutes. They then went on to win two away games winning 0–2 in both of them. First winning at Chester, then Grimsby (manager Chris Hargreaves’ home town).The next game was a home game that was looking to be a 0–0 draw until the 90th minute when can The Gulls captain Luke Young scored an incredible 35 yard free kick to give Torquay the 3 points. The next game was again at home and Torquay won 2–0 against Dover Athletic but they were hardly the better team as Dover had multiple chances to score multiple goals including missing an open goal.

That was the end of Torquay’s 10 game unbeaten run when they had a shocking game away to bottom of the table Telford losing 4–3. That started a terrible run of form in the end of September, large amounts of October and some parts of November. They lost 2–1 away to Forest Green Rovers, then won at home to Wrexham 2–1 but that would be their only win in a while. As they lost a televised game to another team in the relegation zone which was Alfreton Town, they lost the game 4–2. They then lost at home to Grimsby 2–3, Lost an F.A Cup qualifier to Aldershot away 2–0 and lost away to Kidderminster Harriers 2–1.

Torquay had another televised game being showed and this one was against high flying top of the table Barnet, Torquay were 0–2 up at half time, but straight from kick off Barnet got one back, but then straight from that kick Torquay went up and Louis Briscoe scored on the turn from around 20 yards out two make it 1–3. Later on Barnet scored again but Torquay held on for the win. The next game Torquay weren’t so lucky as they were 3–1 up again at home to Forest Green Rovers with 15 minutes to go but ended up drawing the game 3–3. Torquay then played at home to Gateshead.

This game was quite odd and interesting, Ryan Bowman scored a penalty in the 8th minute and it stayed like that until the 86th minute when Alex Rodman scored a penalty for Gateshead to equalize. 3 minutes later in the 89th minute Rob Ramshaw headed the ball into the net for Gateshead which looked like the winner but 2 minutes later after 90 + 1 minutes Ryan Bowman Tapped one in from close range to equalise for Torquay. In the last kick of the game Luke Young’s free kick was heading in when the keeper made a brilliant save and with Ryan Bowman running in for the rebound a defender came in and cleared the ball away as the full-time whistle went. It ended 2–2.

Early in 2015, chairwoman Thea Bristow announced that the club was up for sale. After Bristow resigned in March 2015, she agreed transfer of her estimated £1M 80% stake in the club for £1, subject to sale to new locally based owners. It is unclear of the actual amount paid.

Ownership of the club eventually moved to a new consortium made up of 10 local business people in June 2015, with the new board consisting of: David Phillips (chairman); Mervyn Balsam (vice chairman); Harry and Jill Kerswell; Angela Richards; Val Balson. Steve Breed (Chief Executive) were co-opted on to the board.

On 28 September 2015 it was announced by the club that Kevin Nicholson, former Torquay United player and club legend would be the club’s new player-manager. Torquay United Chairman, David Phillips was quoted as saying “We are delighted to have Kevin on board as player-manager. As a player for the club, he displayed outstanding consistency over many years and is quite rightly regarded as a legend here. He ticks all of the boxes”.

*BS*RECENT FORM*BF*
Coming into the game, Whites have a record of four wins, one draw and one defeat in their last six Vanarama National League matches. Wins were picked up against Woking (1-0), Welling United (2-1), Lincoln City (4-1) and Guiseley (1-0), with a draw against Tranmere Rovers (0-0) and the defeat against Southport (1-2).

Torquay’s record over the same number of matches shows three wins and three draws. Victories were picked up against Macclesfield Town (2-1), Kidderminster Harriers (3-2) and Southport (1-0), with draws against Braintree Town (0-0), Aldershot Town (0-0) and FC Halifax (0-0).

*BS*HOME AND AWAY*BF*
At home this season, Dover have the sixth best record in the division, with eleven wins and four draws from nineteen Vanarama National League matches at Crabble.

Away from home this season, Torquay have the seventeenth best record in the division, with four wins and seven draws accumulated from nineteen matches on their travels.

Ten games without defeat in all competitions (excluding the Kent Senior Cup), and what a time to extend the run in dramatic circumstances as Kinnear’s men look to bring positive vibes ahead of Sunday’s big FA Cup Second Round tie at Sky Bet League 2 side Cheltenham Town.*IF*

*BS*TEAM NEWS*BF*
Whites welcome Connor Essam back into the squad, with the defender competing for a starting berth in defence. Sean Raggett picked up a heel injury during last weekend’s win at Guiseley but is hoping to be fit for the clash against Torquay, whilst Liam Bellamy has recovered from injury. Whites will continue to be without Aswad Thomas, Andy Rafferty and Tyrone Sterling.

*BS*TOP SCORERS*BF*
Whites’ top scorer in the league is Ricky Miller with seventeen, one goal ahead of Stefan Payne and five more than Nicky Deverdics.

Torquay’s top scorer in the league this season is Nathan Blissett, who has the found the back of the net five times.