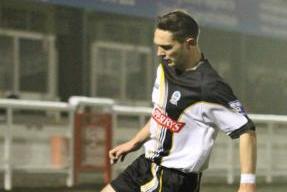 Nicky Forster moved quickly to sign the 20 year-old after he left Gillingham earlier this month. The central midfielder made two appearances for Whites on loan last season.

He becomes the club’s third new signing of the summer after Steven Thomson and Mitchell Walker.

Dean said: “I’m excited about the fresh challenge and look forward to a successful season.”

Rance joined Gillingham at the age of eight and progressed through their youth set-up, finishing the 2009–10 season as the youth team’s top goalscorer. He signed his first professional contract in May 2010.

He had loan spells with home town club Maidstone United and Bishop’s Stortford during 2010 and 2011, scoring three goals in 15 Blue Square Bet South appearances. Like his former teammate at Gillingham Connor Essam, Dean followed up his time at Stortford with a loan spell at Crabble.

In a 2-1 victory against Chelmsford last season his performance contributed to Whites’ best home display of the campaign. Unfortunately he was injured in that game and so his loan spell with the club was cut short.

Rance made his first team debut for Gillingham in November 2011 as a substitute in an FA Cup first round replay against Bournemouth.