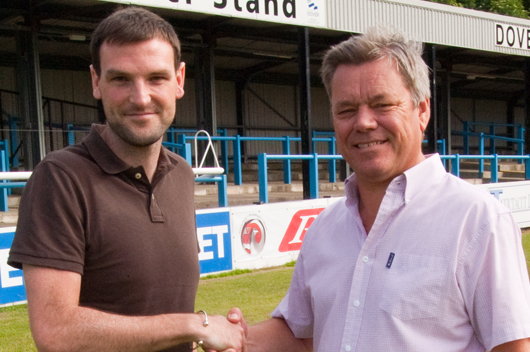 *BS*ROB GILLMAN thinks Dover Athletic have all the correct ingredients to launch another promotion bid.

*BF*And he reckons Martin Hayes is the ideal head chef to blend it all together and cook up a treat for Whites fans this season.

Gillman – who has completed his move from Bromley – jumped at the chance to join his former Bishop’s Stortford boss once he landed the Dover job.

And now he believes the Mighty Whites will be bubbling along quite nicely towards the top of the table this season.

He said: “This is an impressive set-up and definitely a club that’s going places.

“I thought Dover were a very good side in the two games we played against them last season – especially the game down at Crabble. They were well organised and very tough to play against.

“Martin rang me and asked had I signed a new deal yet at Bromley. I hadn’t – and he wanted to know if I fancied joining him at Dover.

“I didn’t need long to make my mind up to come because I worked with Martin before – and he’s a very good manager.

“He has a habit of finding gems – like Steve Morrison for example.

“Martin built a very good team at Bishop’s Stortford. He is a boss who gets the best out of players and only expects the very best.”

Gillman only knows Dean Hill from the current squad – and is excited about the prospect of playing with new team-mates.

He said: “I know Dean Hill from when he was at Ashford. But apart from that I don’t know any of the lads – apart from having played against them. I can’t wait to get to know everyone. We’ve got a big challenge ahead of us.”