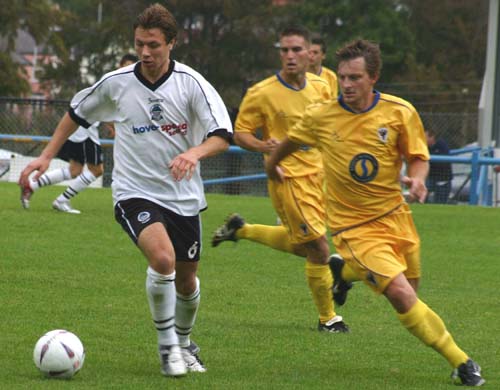 *BS*DALE SKELTON has left Dover Athletic by mututal consent – and signed for Hythe.

*BF*Skelts has come through the youth system at Crabble and made a number of first-team appearances during the past few seasons.

But he has decided that his future lies elsewhere, with first-team chances likely to be limited for the popular local midfielder.

Chairman Jim Parmenter said: “It was decided by both parties that it would be better for his career to leave Dover Athletic.

“We agreed it mutually and we wish him every luck at Hythe. His chances of realistically holding down a place in the first-team were slim.

“The club are hoping to make a few minor adjustments to the squad, so this move was also in the best interest of Dover Athletic too.”

Skelts is a regular visitor to doverathletic.com and we hope that he continues to keep in touch with the club and his friends here.

Meanwhile, there is no official news about Daniel Braithwaite. When a final decision has been made by the player and club, it will be officially revealed on doverathletic.com