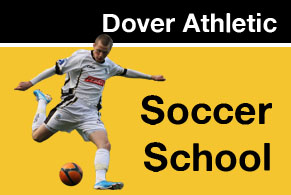 *BS*Dover Athletic have announced the return of their highly popular ‘Holidays Soccer School’.*BF*

Hayes, who will be accompanied by a selection of Dover Athletic players, will be providing coaching to youngsters between the ages of 8 and 13 years at Perrys Crabble Stadium.

Children will be put through their paces in a fun and safe environment, under the supervision of UEFA A badge coaches and members of the first team squad. Each session will run from 10am until 2pm.

Children will need to bring suitable kit, football boots and a packed lunch and drink.

The cost of the Soccer School is £10 per day.

Application forms are available from local schools, at the club shop on Saturday mornings and on Matchdays, as well as the club office Monday to Friday from 10am until 2pm.