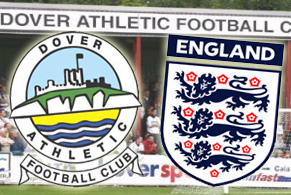 ENGLAND take on Argentina as Sven’s men warm up for the World Cup next year.

The match, being held in Switzerland, is being billed as the Quake by the Lake by one tabloid paper.

It is sure to be an explosive affair, with no love lost between the two countries.

And Dover Athletic are screening the game live on the box straight after our Ryman One game with Banstead Athletic.

Victory could put Whites back at the top of the table and new defender Marc Cumberbatch is expected to make his debut.

Booze, cheaper than the pubs, will be on offer – so you can make it a great day out with your mates and support the club in the process.

So make it a double – watch Dover Athletic and then England at Crabble!