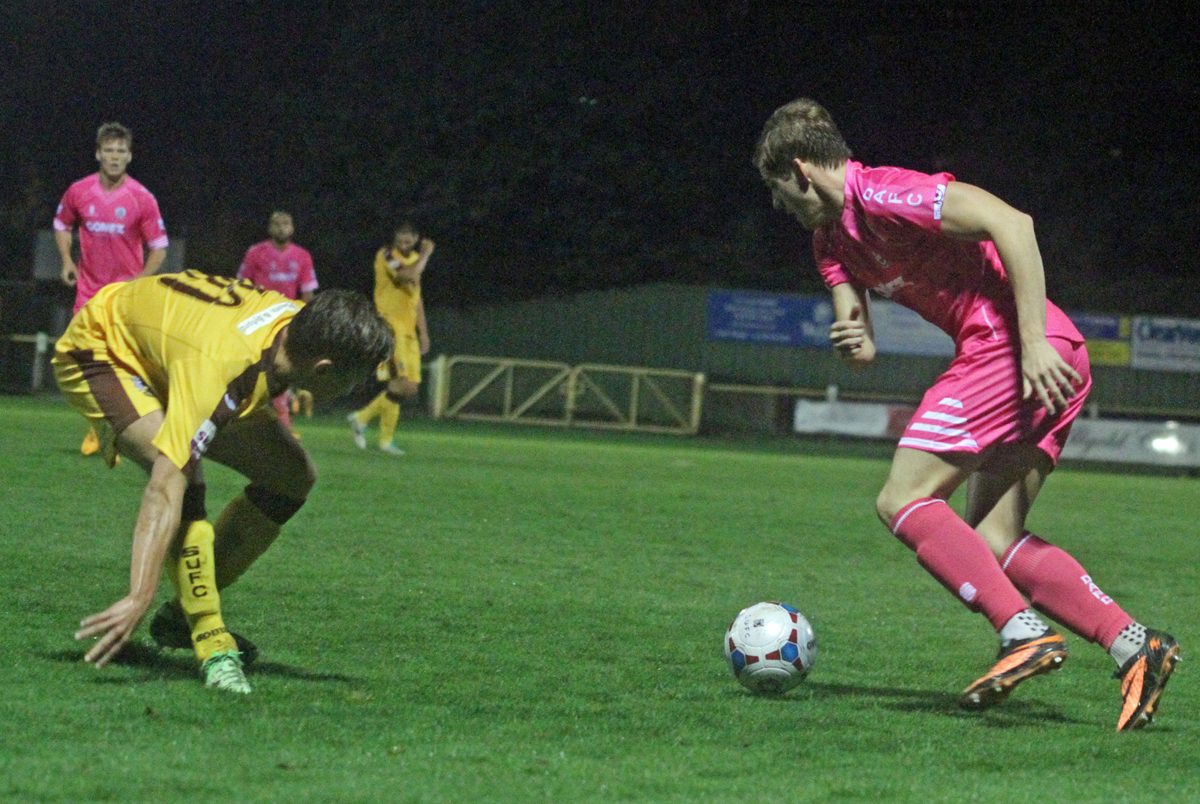 *BS*Fourth-placed Sutton United make the trip to Crabble on Tuesday, rounding off Whites’ run of three home matches in a week.*BF*

With victories already sealed against Maidenhead and Bath, the side will be aiming to win three consecutive home games for the first time in a year.

Whilst it may be too soon to say that the corner has been turned when it comes to results at Crabble, performances have certainly improved.

The run of three consecutive home matches could potentially have all but ended Whites’ dreams of a playoff place, instead they are well on the way to reviving promotion hopes.

With wins recorded against Maidenhead United and Bath City in the seven days, Whites welcome Sutton United to Crabble in what should prove to be the toughest of the triple-header of games.

Having surrendered a 2-0 half-time lead against both Bishops Stortford and Chelmsford City, for the side to record back-to-back wins has given fresh impetus and hope that a playoff place is within reach. Saturday’s win saw the side climb to 6th in the Skrill South table, two points behind Bath City but with three games in hand over the Somerset side Whites impressively dispatched.

A win against Sutton United on Tuesday night could see Dover rise to 4th place, a position the side have not occupied in almost six months. A slow first-half of the season saw the side slump to 15th at one point, but the feeling around the club is that the experience gained can now help the side to push forward, as Chris Kinnear Jr states: “I don’t think we have anything to fear from any side in the division. We’ve played everyone now and know what to expect from sides, so hopefully the experience from the first half of the season can play into our hands in these last few months.”

Sutton are certain to provide a stern test, one that will certainly give some indication as to how far Dover have come in recent weeks – Paul Doswell’s side have picked up ten points from their last four games, with wins against Chelmsford City (2-0), Basingstoke Town (1-0) and Weston-super-Mare (3-0) adding to a point picked up away at Gosport Borough (2-2).

Contrary to their opponents, Sutton have occupied a top-five position for the majority of the season thus far. Since their arrival in the division for the 2011/12 season, United have finished in 4th and 6th, confirming their status as one of the most consistent and strongest side in the league. Indeed, in the five league meetings between the two sides during this time, Dover are yet to record a victory – whilst Sutton have picked up three wins.

The clash between the sides earlier on in the season, at Gander Green Lane in September, saw a solitary Dean McDonald strike enough to give the hosts all three points. That defeat was Dover’s fourth on the spin at the time, the worst run of games suffered under Chris Kinnear since his return to the club.

McDonald, who had featured for Dover in pre-season, has now moved on – after a brief spell at Margate, the midfielder has joined Whitehawk. He is one of a number of key players who have departed Gander Green Lane in the past couple of months, with Jamie Stuart, Anthony Riviere and Sam Rents all joining Margate.

One player familiar to Whites fans this season is Lee Sawyer, who endured an unsuccessful spell on loan at Crabble earlier on in the campaign. The midfielder signed for United in December after his release from Woking.

Chris Kinnear opted to stick with the same starting line-up for Saturday’s match against Bath City, and after two consecutive victories he is unlikely to rotate the side for Tuesday’s game, meaning Nathan Elder will likely to have to settle for a place on the bench considering the red-hot form of fellow striker Jeff Goulding.

The ex-Chelmsford man has netted seven goals in his five games for Dover so far, with Saturday’s win being the first match he had failed to score in, but his all-round play has impressed Whites fans and he will be more disappointed than anyone that he failed to net for the fifth consecutive match.

The weather forecast for Tuesday shows that rain is expected, although there is no pitch inspection currently planned. First news of any inspection that may be required will appear on doverathletic.com