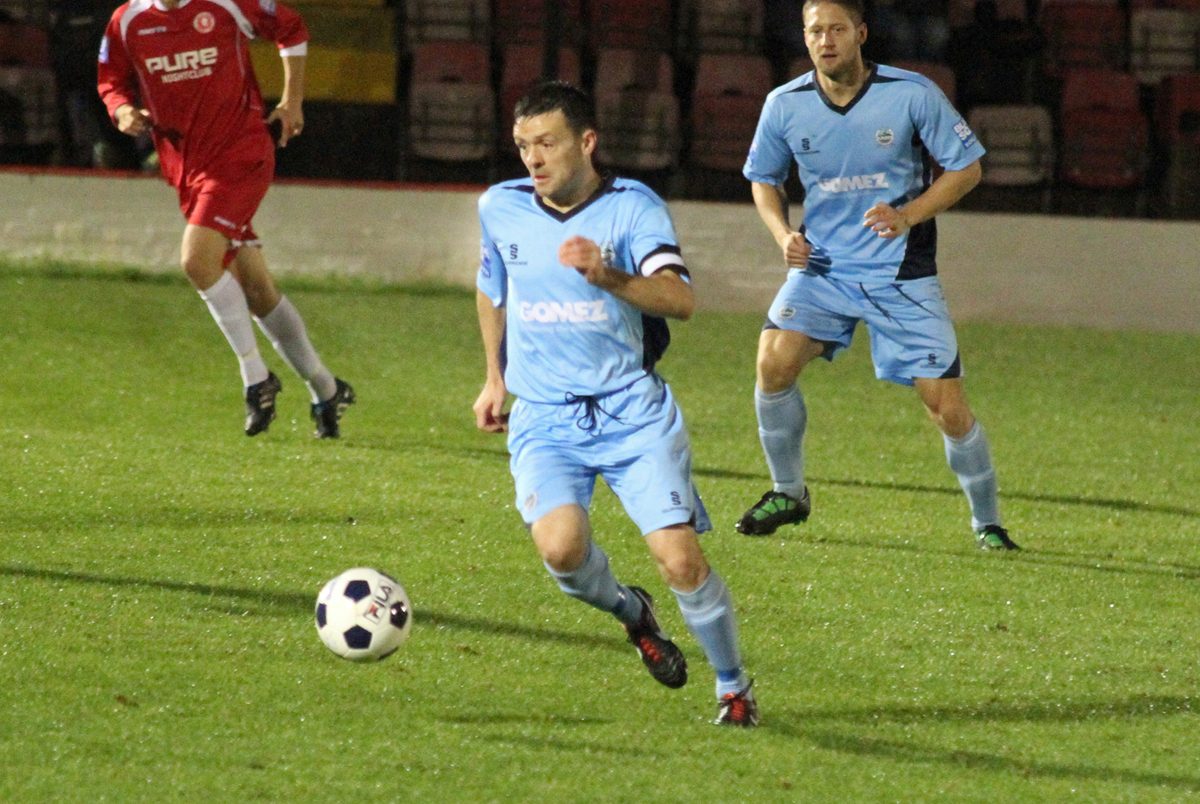 *BS*Steven Thomson speaks to doverathletic.com about his first season at Crabble, adjusting to part time football and the highlights of what has been an impressive career in League football.*BF*

Having spent 20 years in the professional game in England and Scotland, Thomson is clearly enjoying his football at Dover, despite finding the the adjustment to part time football difficult at first after his relocation south of the border to London.

Thomson said: “I had offers from various to stay full time, but I promised my wife we would move when my boy was due to start school, so I chose part time – If I had given up football completely, I would have been depressed.

“I gained qualifications in financial advising when I was playing full time and I found the biggest hurdle was combining football and work – especially training in the evenings! But I am over that now and my body is used to it – I am really enjoying both my job and my football (except the paperwork!).”

Even though Thomson saw his former team mate Nicky Forster leave the club at the start of the year and Chris Kinnear take the Crabble reins, the Scottish player has been impressed with a manager he had no prior knowledge of: “Confidence in the team was low after losing five on the bounce, but he has come in, plays the system he wants and geed all the players up.

“He has a really good knowledge of football at this level and I really like the fact that if you play well, you seem to keep the shirt, as otherwise there is less incentive to work hard and earn your place in the team. I am always happy to do whatever job is asked of me; Dean and I have been asked to be solid in the middle and let the attacking players do the attacking.”

*Q1*Confidence is certainly sky high in the Dover camp right now, with the team on a nine match unbeaten run which is perfect form in the end of season run in, what with the play-offs and quite possibly the title at stake.

Thomson is both realistic and optimistic about the task ahead: “In order to win the title, we are relying on Welling to lose three or four games and us not to lose any. The play-offs are a good bet and though all the teams that make it will fancy their chances, we have hit form at the right time.”

At his peak, Thomson was playing five levels above the Conference South, but is certainly appreciative of the toughness of the opponents he faces week in week out: “As you go up the leagues, players are technically better and more aware as there is more emphasis on keeping the ball. At this level, the ball tends to go forward quicker, but that is probably more to do with fitness levels as teams do not train every day.”

The combative midfielder has no intention of hanging up his boots just yet: “I really enjoy it at Dover and I hope the manager will want to keep me on even if we are promoted. Even though there is extra travelling, being self employed means I can move things around. But I’ve not thought about next season yet as I don’t want to lose focus on the job in hand at the moment. I want to carry on playing for a few years yet all the while I enjoy it.”

*Lpic1*Having moved to Crystal Palace from Rangers at the age of 16, Steven was given his debut by ex-England manager Terry Venables and accruing a further 104 league appearances before spells at Peterborough, Falkirk, Brighton and St Mirren followed.

Looking back on his career, his main highlights were with his first and last professional clubs: “The semi final of the Worthington Cup against Liverpool where we won in the first leg, but were spanked at Anfield, and playing in front of 50,000 fans at Hampden Park against Rangers in the Scottish Cup final where we (St Mirren) lost 1-0, but should have won.

“If I had stayed at St Mirren I would have won the trophy this year!”

A close friend of the Championship’s top scorer Glenn Murray, with whom he was room mates with at Brighton and has been close friends ever since, Thomson does not have any current plans to manage: “I do have my UEFA B license and I might become a coach one day, but managing is not a secure enough profession!”

*BS*Dover play a Crabble double header this week, with AFC Hornchurch on tonight (Tuesday 26th) at 7.45pm and Sutton on Saturday 30th March.*BF*