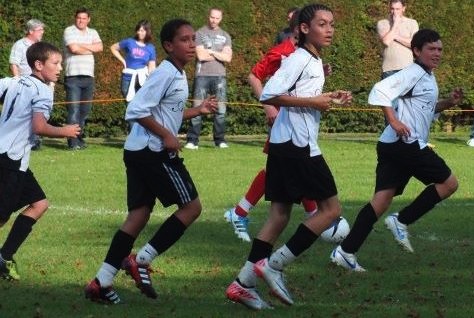 *BS*Dover Athletic Under 13’s kicked off their league campaign at home to Holland & Blair in a thrilling 3- 2 win at River Recreational Ground.*BF*

It was this kind of play that led to Dover’s first goal, Randall winning the loose ball to find Woolston who danced past 3 opposition players, slotting home from 20 yards for a excellent individual goal.

With confidence growing among the Whites they soon went two up when Harry Douglas passed the ball into the back of the net from 25 yards out with a precision shot.

At this point the Dover boys were brimming with confidence flowing forward at every opportunity and when the visionary Randall threaded a ball through to Lever Lewis, who watched his fine effort smash against the crossbar.

With half time approaching H&B were given a lifeline when a fine free kick which Brady managed to get a hand to find the bottom corner from 20 yards out.

This lead to a period of play where the defensive side of Dover’s play came into play. The back four were finally beaten from a corner where the none of the Dover players dealt with it to see Blair bundle the ball home to make it 2-2.

With confidence up for the Blair boys who now looked the more likely to score, they came close again when from a corner kick the ball fell to their forward who saw his effort saved by Brady, who somehow managed to turn the ball away for another corner.

With the clock counting down and a draw looking on the cards the ball fell to the wing wizard Woolston, who once again danced through the Blair back four to test the keeper with a fine strike. The goalkeeper could only parry away to find the outstanding Lever Lewis, who smashed the ball home for the Dover winner.

A great start to Dover’s league campaign which the Whites made hard work of times but showed terrific character to keep the belief to find a late winner.