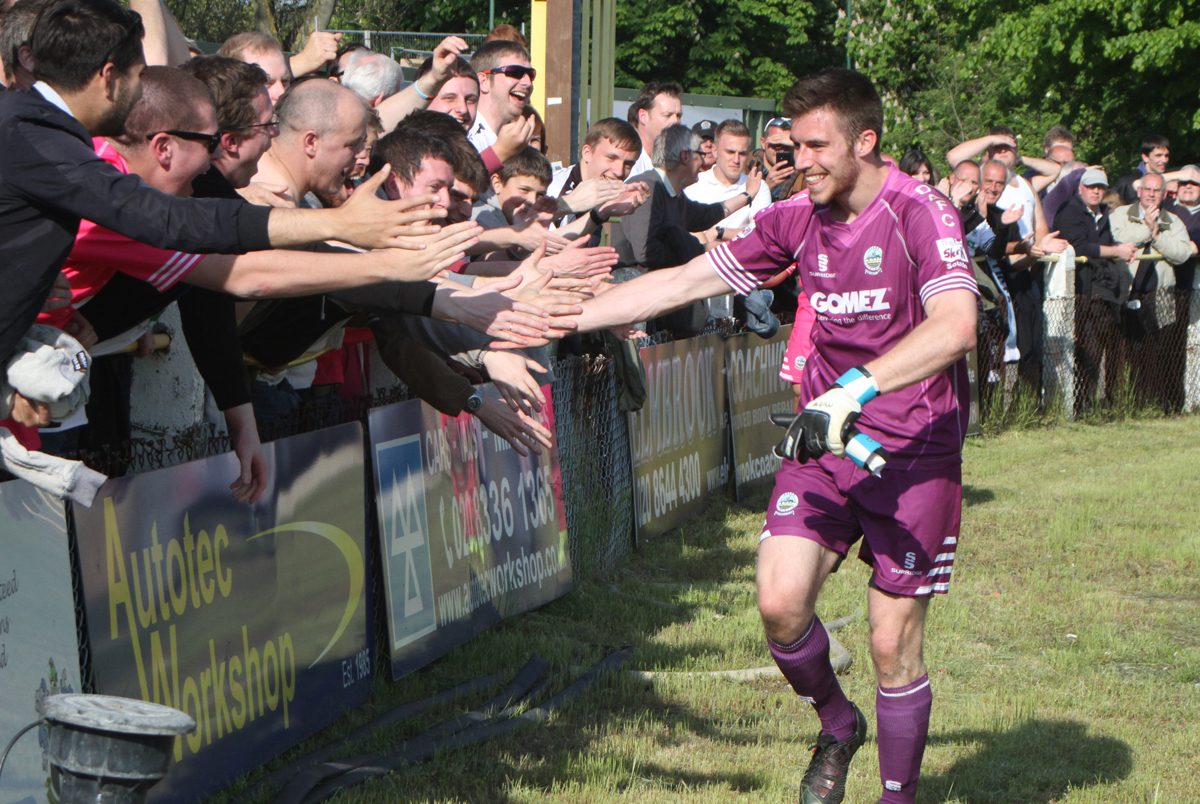 *BS*Dover Athletic goalkeeper Mitch Walker talks to Jack O’Sullivan and speaks of his readiness for the new season, the club’s defensive record and his delight at staying with the club following summer rumours linking him with a move away.*BF*

One of Bill Shankly’s most famous quotes was that “goals win you games, but clean sheets win you titles”. Although it’s unlikely the Scot was specifically referring to non-league football, it’s adage that can applied to all levels of the game.

Of course, Whites did not win the title last season, although the ultimate prize – promotion – was earnt after a playoff final victory against Ebbsfleet United. How the side came to find themselves still in contention for a playoff place was largely down to the exceptional performances of the defensive unit, starting with Whites’ number one – Mitch Walker.

Last season, in all competitions, Walker kept 23 clean sheets and confirmed his position as one of non-league football’s greatest shot-stoppers. This has been rewarded by a string of call-ups to the England C team, and the 22-year-old is looking for another consistent season this time around.

He said: “My focus is to concede as few goals as possible, and I’m hopeful we can continue where we left off last season. It’s certainly going to be a lot harder for us, but we had the best defensive record in the Conference South for the last two seasons which goes to show how hard we’ve been working and the quality we’ve got.

“I want to carry on learning, as I know I’ve still got a lot to work on. I always try to keep level headed, never too high with anything and never too low. I just want to improve my game and hopefully we can have a good season.”

Walker was rested for the side’s final pre-season fixture, a 1-0 win over fellow Kent side Chatham Town on Tuesday night. It was the tenth friendly of the summer for Whites, and the result was the icing on the cake of was already an impressive run of form. Nine victories – including one over Gillingham – were chalked up, with only a 2-2 draw against League One side Colchester United preventing a 100% record.

St Albans-born Walker was happy with how the lead up to Saturday has gone, but stressed that the real work begins now: “Pre-season has been quite long and hard, we’ve played plenty of games and although they’ve gone well, there’s always something missing from them – the end result.

“It doesn’t overly matter if you win, lose or draw in pre-season, there’s nothing really to it.

“The team have looked very fit and sharp over the past few weeks and that is the main thing we can take out of it. The new boys have bought a little bit of added quality in, which maybe we missed at times last season.

“Our performances against Colchester and Gillingham really prove that when we played MK Dons in the FA Cup last season, it wasn’t a fluke that we gave them a good game and a good test. Before the two games against League sides this time, maybe people thought we were going to be outclassed a little bit but we certainly held our own.”

A lot of the work in pre-season has revolved around increasing fitness levels, to ensure that players have the ability to stay competitive for the whole ninety minutes. Fitness coach John Morris has been drafted into the setup, and Walker feels his input has been noticeable: “John has done wonders with the team. In football, there are lots of little things that you need to get right which are all part of the puzzle.

“He has come in and changed little things around the place and it’s certainly giving us that extra bit to our performances. Some of us have found the amount of running tough, especially to start with, but the benefits of it are now showing.

“I’m sure that when we go into the season, it will all prove worthwhile.”

Walker’s exceptional form since he joined the club in May 2012 has inevitably seen him linked with moves away from the club, with Crawley Town the latest side rumoured to be interested. To an extent, it was an understandable link – Walker trains with the League One side during the week – but nothing came of the interest and Walker says he is fully focused on the season ahead of him and happy to have another year on his current contract at Crabble.

He said: “It is all completely out of my mind now – it didn’t go through for one reason or another, but as I said to people at the time, if I was going to be staying at Dover then I would be absolutely fine with that – I’m not in a bad position at all.

“I have really enjoyed my last two seasons at the club. It’s a great club, run as a professional club and everyone – from the chairman downwards – wants to succeed.

“I’m hoping for more good times at the club in the future.”